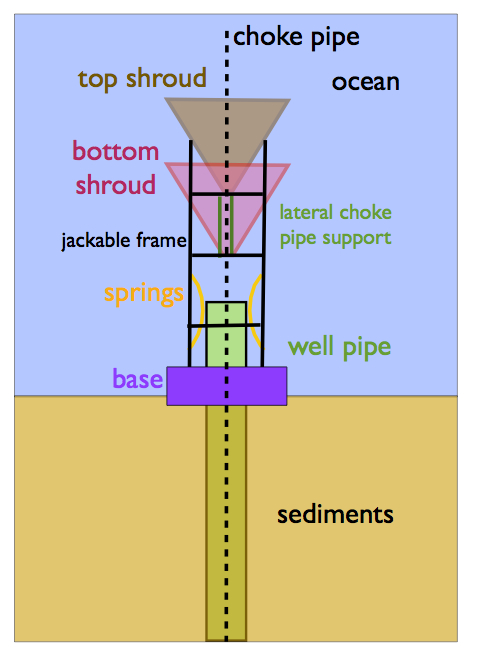 The apparatus described herein, a mud injector, stops undersea well blowouts by providing a method for injecting heavy drill muds at depth within a stricken well. It is assumed the well pipe has been prepared such that its top is unencumbered by various obstructions, and that the oil is issuing forth at high pressure.

The mud injector consists of a centering cylindrical frame that is lowered over a subsea oil well pipe. The frame guides a small diameter choke pipe as it is inserted into the well. The pressure of the muds injected from the choke pipe overcomes the pressure of the oil, thus stopping the blowout. The proposed apparatus has applications is such areas as the Gulf of Mexico, and can prevent billions of dollars of environmental damage.

The choke pipe is very rigid over its lower 10 meters so it can withstand the lateral forces of the oil issuing forth from the well, and is supported laterally by the frame as it is lowered into the well pipe. The choke pipe is more flexible over the remainder of its length so that it can deform to follow the well bore as it is inserted, perhaps to a depth of 500 meters.

The cylindrical frame supports two conical shrouds above a heavy base. The conical shrouds are rigidly connected together. The base is sufficiently heavy to hold the apparatus on the seabed against the upward pressure of the oil on the lower shroud . The frame is centered on the well with deformable guide springs that engage the pipe so that it can be centered over the well pipe, so permitting insertion of the choke pipe.