A Diferential Light Amplifier Applicable to a Solar Locator and Tracker 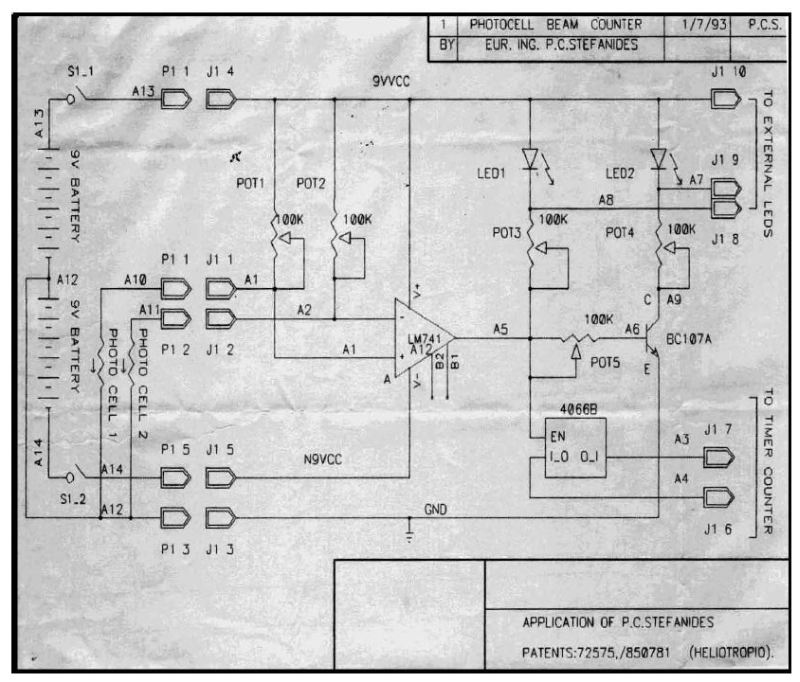 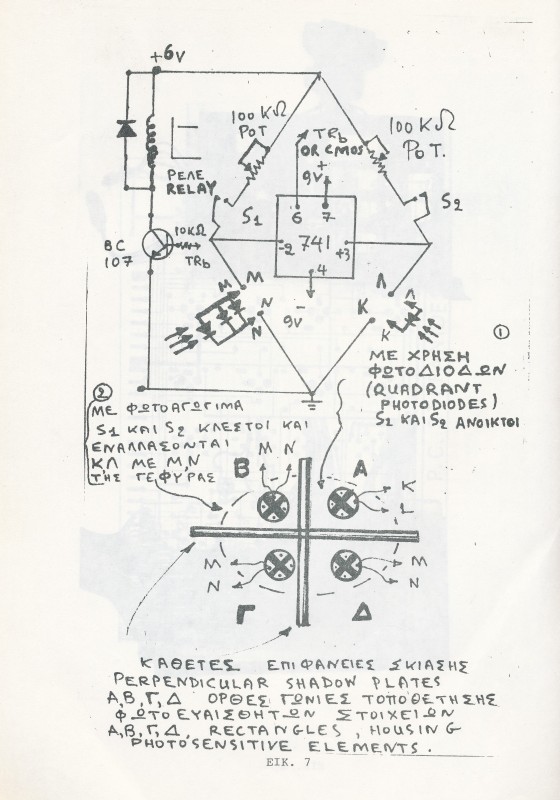 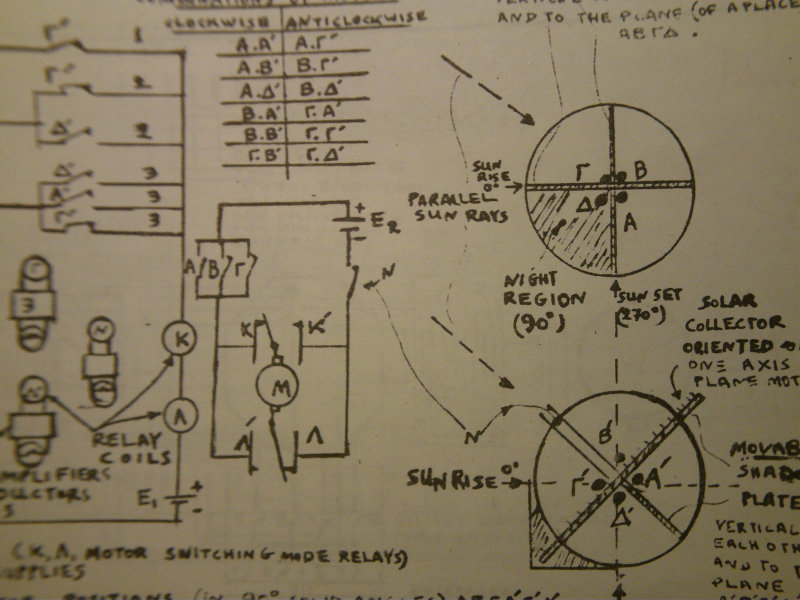 A design of a special differential light amplifier has been designed to detect direct light and filter out the reflected light from the sky. The primary function is to orientate a solar collector to face the Sun, with AZIMUTHIAL tracking of 270 Deg and ALTITUDINAL 90 Deg .The concept is based on the idea of combining a signal indicating the direction of the sun rays, within one solid angle of “quarter hemisphere”, with a signal indicating, similarly quarterly, the relative angular displacement (or error) between the sun rays’ direction and the tracker’s orientation AZIMUTHIALLY. http://www.youtube.com/pstefanides#p/u/114/D2puwgq6r90
http://www.stefanides.gr/Pdf/HELIOTROPIO.pdf
The direction of the sun rays, may be within one of four of a set of such angles: ?, ? or ? at any time of the day (? being the Night Region).These are separated to each other by “LIGHT SCREEN [CROSS] PLATES” which are orthogonal to each other with their, theoretical, section line vertical to the ground plane and “Fixed” with respect to ground.
Similarly, the orientation of the tracker, with respect to the sun rays‘ direction is indicated by angles : ?’, B’, ?’ and ?’.This set of angles is constructed similarly with that of the “Fixed” ones but it “Rotates” in step with the vertical shaft AZIMUTHIALLY. Optical sensors within angles [four in each one – if A is set by light at logic level “1” then B, ? and ? are set to level “o”, unless equally lighted such as the case of STOP: ?’.?’] give signals, processed by the logic unit of the system. A table is drawn for the “BOOLEAN ALGEBRA” combinations for CLOCKWISE, ANTICLOCKWISE and STOP requirement conditions. The sets of combinations minimize to the following functions [“AND” functions]:
CLOCKWISE ROTATION: ?.?’, ?.?’, ?.?’, B.A’, B.B’, ?.?’ - ANTICLOCKWISE ROTATION: ?.?’, ?.?’, ?.?’, ?.?’, ?.?’, ?.?’, ?.?’ - STOP: ?’.?? or ? [Night Region 90 Deg as assumption here for the design conditions]. The AZIMUTHIAL reciprocation is assumed 270 Deg for SUN- RISE /SUN-SET in summer [for Greece it is about 222 Deg ].The vertical [ALTITUDINAL] reciprocation BEGINS when the AZIMUTHIAL STOPS. Functions here are simple [up and down reciprocation 90 Deg]. Other combinations [erratic which may, indeed, occur] beyond specified, are considered incompatible and bring the system to total STOP, until self rectification.
The cost for the Tracker Amplifiers’ System is that of the two printed circuit boards, electronic components, sensors, wirings and connectors.Easy use, of such tracking systems in remote areas.
AWARD: Archimedes Silver Medal [no monetary one]
Application of this kind of amplifier was designed and used in industry for actuator reciprocations’ speed [time-distance] measurements for engine nozzles, while testing in lab main fuel controls, of a certain type of aircraft engines [ Leased freely[ by me) to the Industry for over 20 years, as a by-product of HELIOTROPIO STEFANIDES [ contested in 2011 Create the Future design Contest by Panagiotis Stefanides] and bearing the name Photocell Beam Counter.
http://www.youtube.com/pstefanides#p/u/0/gov5LpIdsmE
http://www.stefanides.gr/Pdf/
SENSORS_93_TECHNICAL_CHAMBER_OF
_GREECE_PANAGIOTIS_STEFANIDES.pdf
Personal info: http://www.stefanides.gr
This email address is being protected from spambots. You need JavaScript enabled to view it.
Tel: ++30 210 8011291
Mob: ++30 6974096824
Patents all[7]expired.