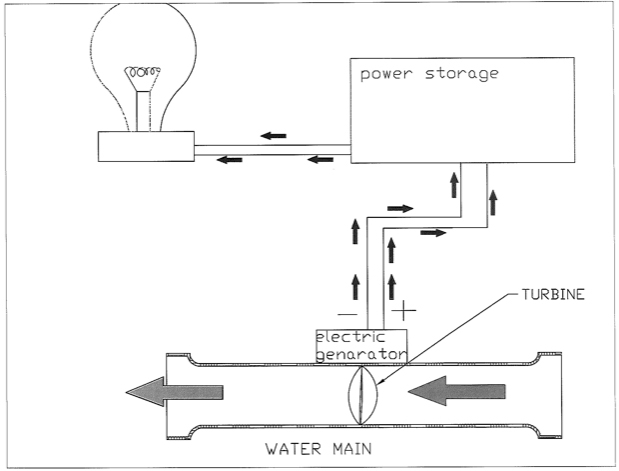 This project takes the use of water flowing through the main line under houses and city streets and turns the flow rate that already exist into stored energy to be used for anything.
The main lines in our city, town, and rural area run daily and we never recover any of that energy. We have added a small trubine genarator to a piping system that turns the genarator and charges up a cell. That cell can be used to power street lights or supplement houses' electricity.
The cell is simply storage untill used or can be directed strait into service. This system can be put into place in any design. They already change pipes on a pretty high rate.

i know it sounds realy simple, but we lose lots of power every day and this simply recovers a form of power we already use. We dont have any ugly windmills that clutter up the skies. This system also has a easily replaceable parts. The cost to convert would be fair as we already replace lots every year anyway.

Working with the local water co-opt I can spin more constant power per year than 3 windmills and never be seen. Also I can save a small city about 17% of their electric budget. They use about 27% of their budget on power street lights. This system could reduce that dramatically. And that's just replacing the pipes we have budgeted for this year. It wouldnt reduce the water psi by any noticeable difference.