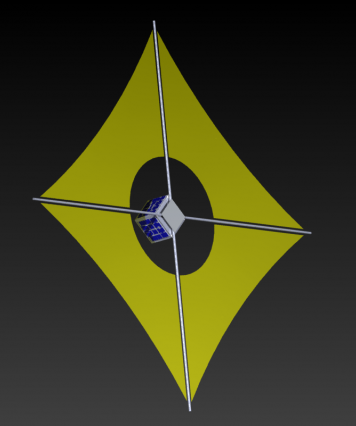 The Attitude Control and Aerodynamic Drag Sail (ACADS) is a gossamer structure intended to be deployed on a nanosatellite once the spacecraft is on orbit.

The sail is deployed using compressed nitrogen that inflate telescoping booms. Once deployed, the sail has a cross-sectional area of ten square meters.

A prototype sail has been constructed and deployed many times at various design reviews and conferences, proving the effectiveness and reliability of the deployment system.

In an orbit of 600 kilometers, a satellite with a mass of fifty kilograms and a volume of 50x50x50 centimeters would take about 25 years to deorbit. With the sail deployed, the satellite's deorbit time would be reduced to less than six months.

The sail is also laced with ten turns of 30 AWG wire. Once current is passed through the wire, magnetic torque will be generated, providing an attitude control system for the satellite.

The usefulness of the ACADS becomes apparent from the amount of debris populating low-Earth orbit. With tens of thousands of pieces of debris, there exists an ever-present threat to manned and unmanned spacecraft.

In light of this, having a system that can rapidly deorbit a satellite at the end of its operational lifetime can be a valuable system to utilized for future satellite missions.