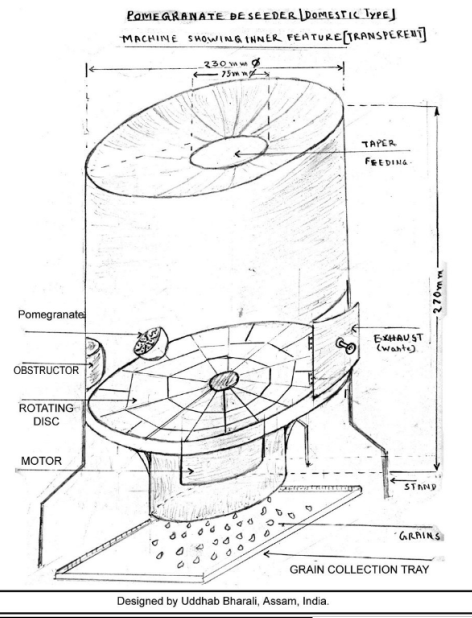 Pomegranate is a fruit that grows in temperate climate. Its juice is high in nutrients and anti-oxidants. It typical size varies from an apple to a small grapefruit (3-5 inches in diameter) with the cross section resembling a rounded hexagonal shape, and has thick reddish skin. Unlike most other fruits, it edible content are packed in a large number of “seed” or arils (200 to about 1500), each of which has a surrounding juice-laden pulp—called aril—ranging in color from white to deep red or purple. The seeds are tightly packed in pockets of light yellow colored membranes that divide the interior of the fruit into several segments.

However, pomegranate is unattractive as a table-fruit due to the difficulty in getting the arils out of the fruit. The skin of a pomegranate is impossible to peel like other fruits, nor is the skin edible. Second, cutting the fruit open with a knife also does not help as the arils remain trapped inside secondary membranes. Finally, the arils can easily burst if handled roughly spilling colored juice that permanently stains clothing. Because of these factors, conventional kitchen equipment like blenders and juicers are not usable for Pomegranate. Manual deseeding is the current process but it is slow and cumbersome. Therefore there is need in the market for an automated process and device that is compact, affordable, and safe and one that can cleanly extract the arils from a pomegranate fast. Such a device could be used efficiently in the kitchen or in a small scale fruit processing stand.

Mechanism of operation:
The key to automated deseeding of a pomegranate is to be able to apply repeated but relatively gentle blunt force from the outside on its thick shell while making sure that the point of application of this force is evenly distributed over the surface of the shell. This allows the arils to be gently released from their individual pockets.

Fig 1 is a schematic of this device. A pomegranate is cut in half and is inserted into a cylindrical container through an opening at the top. The fruit gently fall on to a gently rotating disc at the bottom of the cylinder. The disc has a pattern of openings cut on it through which any lose aril can fall out for collection in a secondary container at the bottom. As the disc rotates, centrifugal force of rotation pushes it towards the side walls of the cylindrical device. A rounded pillar attached to the inner surface of the cylinder serves as a hammer that the rotating pomegranate encounters once in each rotation. This releases the arils from the fruit leaving the outer skin intact. The shape of the rotating disc, the cylinder and the rounded pillar together ensured that each hemispherical half of a fruit remains on its back while in rotation. The motor that spins the disc has an adjustable speed which is optimized for maximum deseeding efficiency. This device can completely deseed a pomegranate in a few seconds.