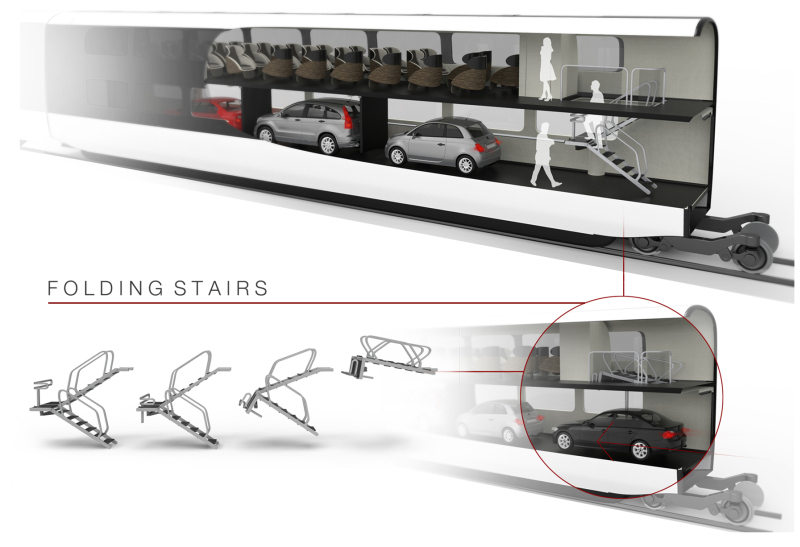 This entry is a concept for a high-speed rail network that would be integrated into the automobile-based infrastructure of the United States. High-speed rail has already proven to be a convenient, fast, safe and efficient form of transportation elsewhere in the world but despite its benefits the idea has never caught on here. A possible way to make high-speed trains more effective in the United-States could be through the integration of personal vehicles. Regions that have developed HS networks such as Europe have denser urban centers and extensive public transportation systems that increase the level of access to HS. The population in the US on the other hand depends much more on personal vehicles that are needed for sprawling infrastructures. By creating a HS train that carries passengers conventionally and others within their own personal vehicles the idea could be more successful within the United States. Drivers could have the comfort and privacy of their own vehicle at 200 mph while traveling in-between close proximity cities such as Los Angeles and San Francisco or Washington and New York. After arrival they would easily still be able to get to their final destination.

The train consists of two levels, the top that features conventional seating and the lower section where vehicles are parked. When the train arrives at the station the front car and rear car open. Mobile platforms at the front and rear of the train slide into place allowing vehicles to drive in and out of the train. Once in the train, barriers fold behind every car once they park. These evenly divide parking spaces and provide privacy. The lower level features large windows to still give passengers in their cars a comfortable environment and certain cars feature stairs giving access to lavatories or other amenities on the upper level.

Although this idea isn’t incredibly far-fetched it combines existing technology and could be a possible early addition to a path of more efficient and sustainable transportation systems.