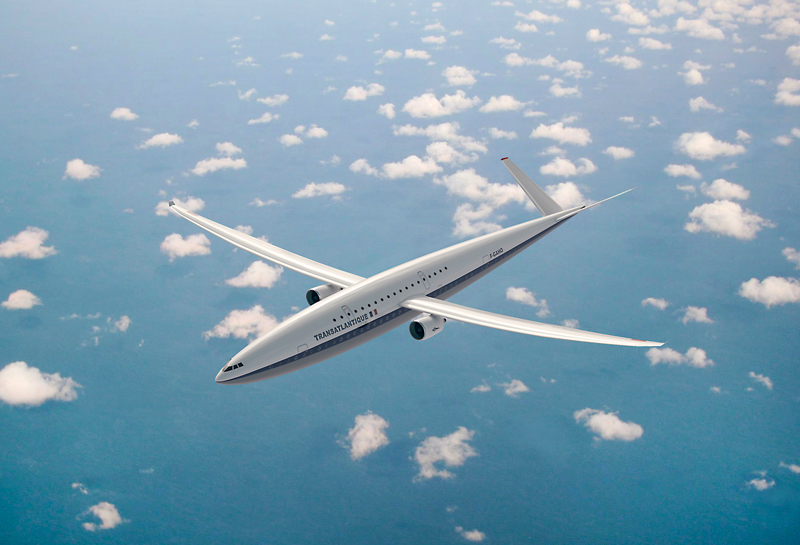 What would a super fuel-efficient aircraft look like; how far can we refine its aerodynamics; and what kind of performances, load capability and comfort can we expect from it?

The AGA-33 is a 250-passenger fuel-efficient twinjet that is optimized for 6000 km transatlantic missions. This aircraft will be constructed using known materials and mature technologies. This is something that can be done right now, and not “sometime in the future.”

To achieve better fuel-economy, the L/D (lift to drag ratio) has to be boosted by enlarging the wingspan, and reducing the wetted area. With a 68 meters wingspan, the AGA-33 aircraft achieves a L/D of 32. As a result, the fuel burn per passenger falls to 1.01kg of fuel per passenger/100 km or 191 miles per passenger per gallon. A normal jet will use twice as much to carry the same load.

Here are some of the elements that make up the AGA-33:

1. The streamlined fuselage: Improves aerodynamics as much as one can and also reduces the wetted area.

2. The engines: They are on the wings for practical (noise and maintenance) and structural (keeping the weight on the wing) reasons.

3. The V tail: It is the only way to keep the tail out of the engine blast. A “T” arrangement could have been possible but heavier and less elegant.

4. The double deck: The idea is to get as much floor plan as possible out of the fuselage; more floor space means more comfort. It also concentrates the weight near the wing where everything is stronger and wider.

5. The straight wing: Fuel economy is dictating the design so a long thin wing is needed. The plane will be slower, with transatlantic crossing taking an hour more, but if cab rides, airport security, check-in and delays are factored in; the extra time would seem negligible.

6. The flaps: With a high aspect ratio wing, plain flaps are sufficient. The landing speed will be under 130 Knots with a Cl of only 1.8, a very manageable speed. Plain flaps have other advantages. They can be used in negative settings to reduce drag at high speed and can also twist the wing for safety or performances.

Airlines using such a super fuel-efficient aircraft will save more than $20,000 in fuel every day.