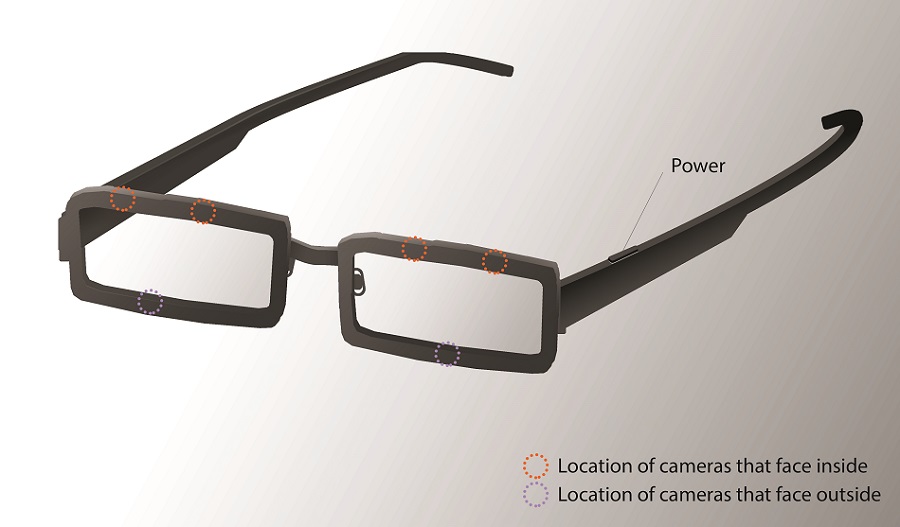 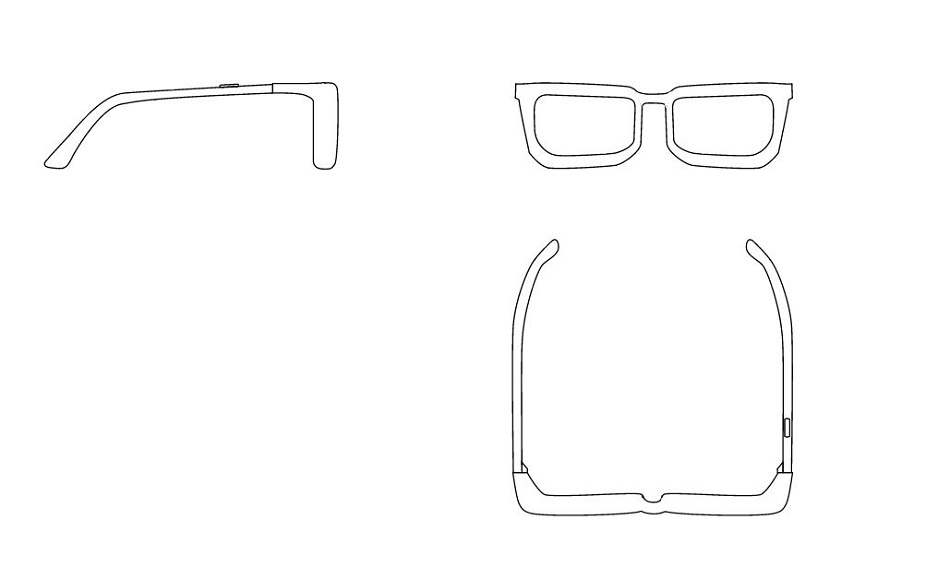 BLiNKZ is an eye-controlled, computer vision aided, wirelessly networked, mobile information device, housed in the familiar form of a pair of eyeglasses.
Once manually turned on, four backward-facing cameras track the eye movements of the user, allowing the wearer to control the interface on the interactive, heads-up display (HUD). Those movements direct the eye cursor, seen as the yellow circle in the HUD. Either a deliberately fixed gaze or a triple-blink, depending on the action involved, can function as a selection action or “click”. BLiNKZ also has two cameras facing forward into the environment. When the eye-tracking cameras detect that the user is gazing intently at an object, such as a Universal Product Code (UPC) symbol, a QR code, a logo, or a face, it can signal the environmental cameras to act on their computer vision capabilities to recognize and identify the target. Through wireless mobile communication technology, BLiNKZ references online databases to retrieve information regarding the object in question, and channels relevant information to the discreet unidirectional glass lenses of the heads-up display. A BLiNKZ-enhanced person can also capture and send images to other users, contingent upon the receiving user’s consent. A user can also allow another BLiNKZ user to “tag” him or her, so that the built-in gyroscope-accelerometer and the GPS capabilities of the device can help the two meet.

BLiNKZ is subtle.
BLiNKZ uses the IUI™ eye-controlled interface to spare you from the unwanted attention commonly attracted by hand or voice-controlled devices.

BLiNKZ is inconspicuous, much like glasses.
Choose a BLiNKZ style that is right for you!
The designs for BLiNKZ frames resemble normal eyeglasses and use one-way transparent lenses, rendering the displayed content invisible to those around you.

BLiNKZ is immediate. Literally in your face.
BLiNKZ provides an immersive experience that appeals to tech lovers.

BLiNKZ is intuitive.
Intuitive eye movements can be combined with an optional simplified interface gives BLiNKZ wide appeal to the less tech-savvy segment of the population.

BLiNKZ brings people together.
BLiNKZ allows friends to “see” each other’s locations in the HUD of BLiNKZ and easily meet up at destinations such as a mall, a crowded event venue, or a meet-up point for a tour in a foreign travel destination.

As you go into the world, BLiNKZ brings the world to you.
BLiNKZ can be combined with optional artificial reality features to allow subtitled translation text of foreign language maps and signs, making it possible to navigate the streets and public transit of a far-away city, without looking like an obviously lost tourist.

BLiNKZ is your window into the future.
BLiNKZ provides a futuristic sensation by combining the functions of eye tracking, cameras, computer vision, search engines, GPS, and social networking.

The future is just a BLiNKZ away!