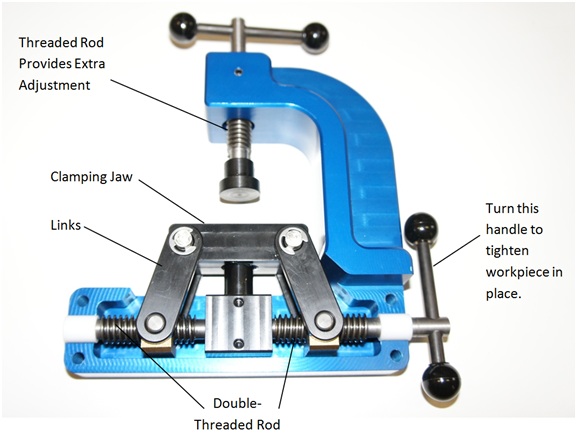 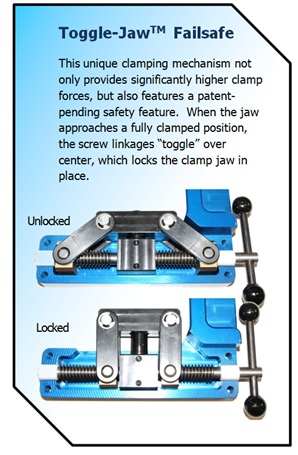 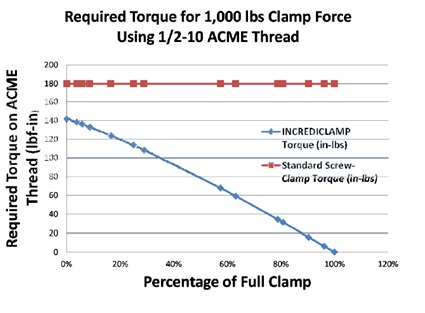 Problem Statement:
Production demands on skilled workers are at an all time high. Welders, assembly technicians, machine builders and repair workers all have to endure long hours of repetitive physical maneuvers which many times include hand cranking workbench clamps and vises. This exhausting physical labor can result in fatigue related injuries. Often times the vises loosen during a critical process such as welding or assembly work which can also result in a risk for injury.

The Solution:
The new INCREDICLAMP ™ is simply the safest, most powerful workbench clamp mechanism ever. Up to 7x the clamping strength of standard screw clamping devices!

What It Is:
The INCREDICLAMP(TM) is a new innovation for clamps and vises that holds your workpiece secure and allows for an incredibly high clamp force when compared to a standard screw clamp. This also means that you can now achieve the same clamp force with much less physical effort – up to 7 times less hand tightening torque, for example.
Such high clamp force is achieved by utilizing a dual-threaded screw to move the clamping jaw with a set of links. As the screw is turned, the angle of the links increases. This increases the mechanical advantage and clamping force. This means that the same amount of hand tightening torque will now result in up to 7 times the clamping force when compared to standard screw clamps. This results in less fatigue and a lower risk of injury.

Toggle-Jaw™ Failsafe:
This unique clamping mechanism not only provides significantly higher clamp forces, but also features a patent-pending safety feature. When the jaw approaches a fully clamped position, the screw linkages “toggle” over center, which locks the clamp jaw in place. This clamp will not loosen unintentionally.

This patent pending clamp mechanism addresses problems seen in many production related applications. Assembly technicians will see reduced fatigue when compared to using standard C-clamps and workbench vises. Welders will immediately be able to produce higher quality parts because of the increased reliability in the clamp holding over time. Elderly or handicapped hobbyists now have an extended ability to exert higher clamping forces on their parts then they ever could with standard clamps. Automated work cell engineers can even outfit this clamping mechanism with smaller, lightweight actuating motors, which will result in new gripping devices that can pick up heavier parts with higher reliability. The applications are endless, with the adaptation of the new INCREDICLAMP™!