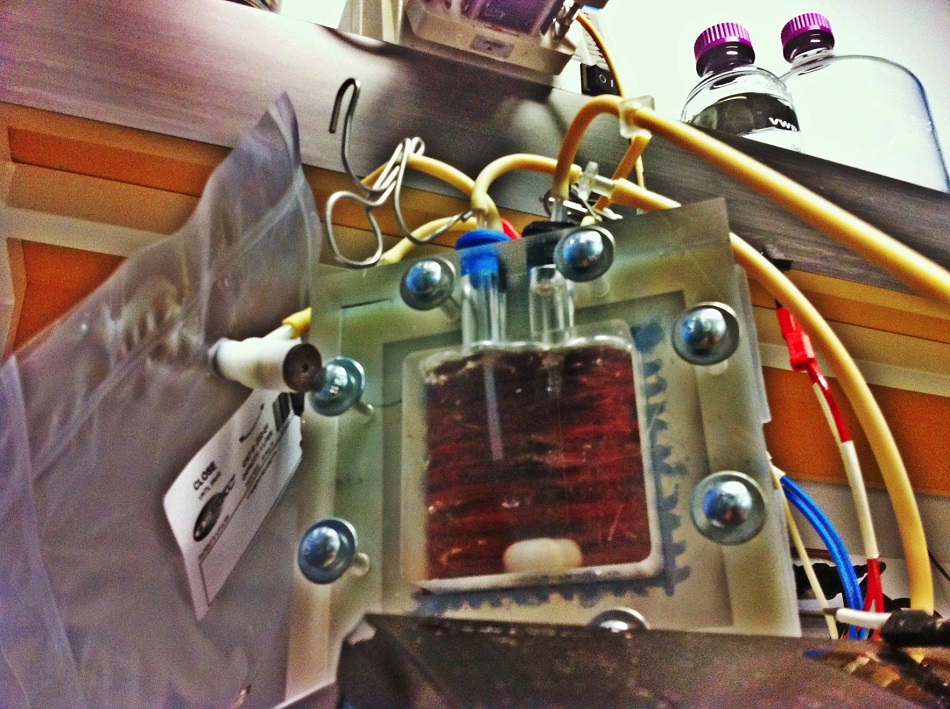 Technologies based on microbially-catalyzed reactions are cost-effective for managing waste at a large scale. 125 million dry tons of pig waste is produced globally every year. Pig waste has high concentrations of organic carbon and nutrients like nitrogen that, when discharged to the environment, can lead to surface water eutrophication, contamination of drinking water sources and resulting health problems like blue-baby syndromes, noxious odors, and greenhouse gas emissions. Thus, protection of public health and the ecosystem demands removal of organic compounds and nutrients from pig waste prior to discharge. Here, we present microbial fuel cells (MFCs) as a viable technology to extract energy from pig waste and/or recover nutrients, improving environmental quality and welfare for everyone.

A microbial fuel cell is a special class of fuel cell that harnesses the potential of microorganisms to biodegrade organic substrates. An MFC can be constructed from inexpensive materials such as graphite that serve as the electrodes. In an MFC, the anode harbors anode-respiring bacteria (ARB) that generate electrical current: ARB biodegrade organic wastes and respire electrons to the anode. We can configure the MFC to harvest direct electrical energy, or generate products of value such as caustic soda and peroxide using the electrical current. At the same time, MFCs do not require expensive catalysts since the ARB generate new biomass from respiration and act as self-regenerating catalysts.

We have discovered that in MFCs, physical chemistry and microbiology of the ammonium ion (NH4+) work in liaison to enhance performance and facilitate nutrient recovery. The process begins at the anode, where microorganisms biodegrade proteins to form NH4+, which moves to the cathode via migration, advection, and diffusion, as the electrons move through the external circuit. At the cathode, NH4+ (an acid) can counter production of a base at the cathode to improve the MFCs’ performance. Furthermore, NH4+ can convert to H+ and NH3, and NH3 gas can naturally evolve from water for easy nutrient recovery. At last, the evolution of NH3 leaves behind H+, which can continue to maintain the cathode pH.

We believe that MFCs offer two major advantages over existing technologies to treat pig waste. First, anaerobic digestion – the current standard for waste treatment – converts pig waste to the greenhouse gas methane, which is combusted at low efficiencies (33%). Our lab has used MFCs to generate either valuable electrical energy or other chemical products (e.g., caustic soda, H2). Second, the effluent from anaerobic digestion requires additional treatment (nitrification/denitrification processes) to remove nutrients that are often not recoverable. With MFCs, the anode chamber strips organic carbons and nutrients, making it more appropriate for discharge into waterways. NH3 naturally evolved from the cathode can be easily converted to fertilizers. Using MFCs, we are creating a nutrient cycle through NH4+ recovery, which can lower the demand for synthetic fertilizers using fossil fuels. Thus, our application of MFCs represent a win-win scenario in which ARB benefits from growth and the society benefits from electrical energy, wastewater treatment, and nutrient recovery.