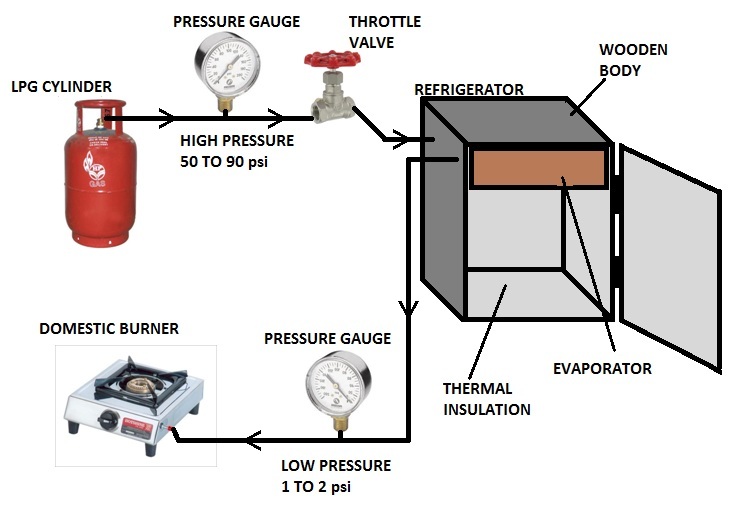 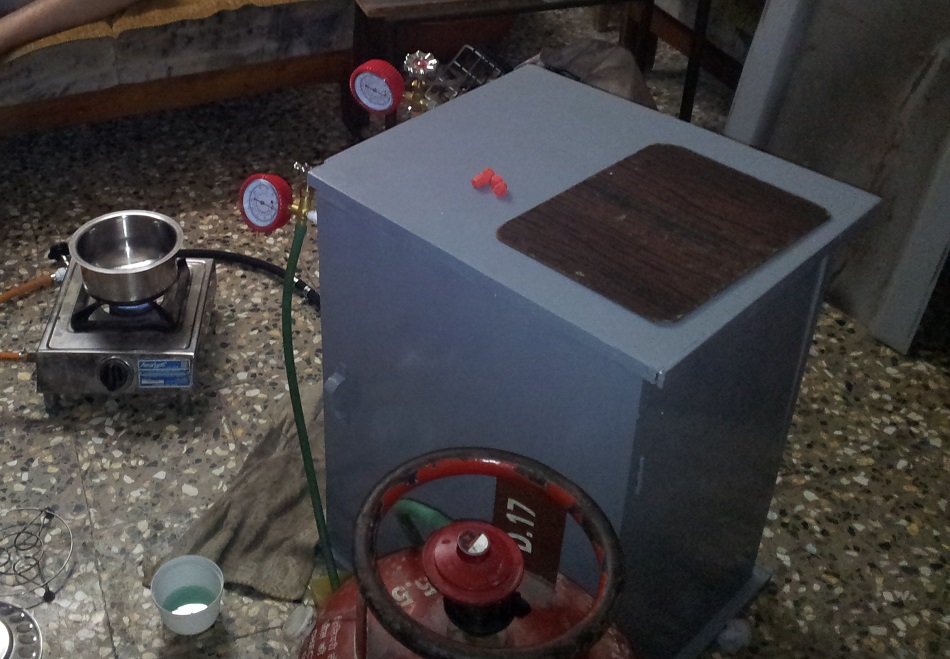 Introduction:
The energy crisis persists all across the globe. We think of recovering the energy which is already spent but not being utilized further, to overcome this crisis with no huge investment.

The climatic change and global warming demand accessible and affordable cooling systems in the form of refrigerators and air conditioners. Annually billions of dollars are spent in serving this purpose. Hence forth, we suggest NO COST Cooling Systems.

Idea and Concept:
Petroleum gas is stored in liquefied state before its utilization as fuel. The energy spent for pressurizing and liquefying is not recovered afterwards. If it is expanded in an evaporator, it will get vaporized and absorb heat to produce cooling.

This property has been used for refrigeration and air conditioning. So that the liquefied form of LPG can be used for cooling and the expanded gas (LPG) can be further used for combustion as a fuel.

Working principle and process:
• LPG is extracted at high pressure in liquefied state from the storage device. Its pressure and flow rate is controlled by a valve connects it to the evaporator at requisite pressure in requisite quantity.
• An evaporator is housed through which LPG flows. It gets converted from liquefied state to gaseous state and expands. So it absorbs heat in the form of latent heat. Due to this process, heat from surrounding is absorbed so cooling effect is produced.
• This effect is magnified by an evaporator. A network of pipes containing gas is covered by thin and closely spaced fins which help in effective and fast cooling. The insulating material helps in storing the cooling effect for a longer period of time.
• The LPG leaves the evaporator in gaseous form; it is then directed towards the burner, engine, or any other application where it is to be used. Thus, no LPG is consumed for cooling purpose.
Main Advantages:
• Cooling is free of cost as no electricity is needed for operating the air conditioner and refrigerator.
• LPG is not consumed during cooling process, only expanded and further used for cooking, as automobile fuel or for any industrial purposes.
• The product is a green technology and is eco- friendly, as if eliminates the use of ozone-depleting refrigerants.

Applications:
• The system can universally be used in industrial central cooling and domestic refrigeration and air conditioning as well.
• It can be used in automobiles running on LPG or other Gaseous fuels for air conditioning.
• On the other hand the technology if implemented in heavy utility vehicles or transportation, it would help in distant transportation of eatables as the refrigeration system inside the vehicle and the cost of running the vehicle can be borne simultaneously.
• Cooling and storage of essentials in remote areas and in emergency vehicles, such as storage of essential bio-chemicals, injections, etc in an ambulance, is easily possible.
• It can be used for zero cost air-conditioning of spaces like airports, shopping malls, etc which have their own gas turbine power-plants.