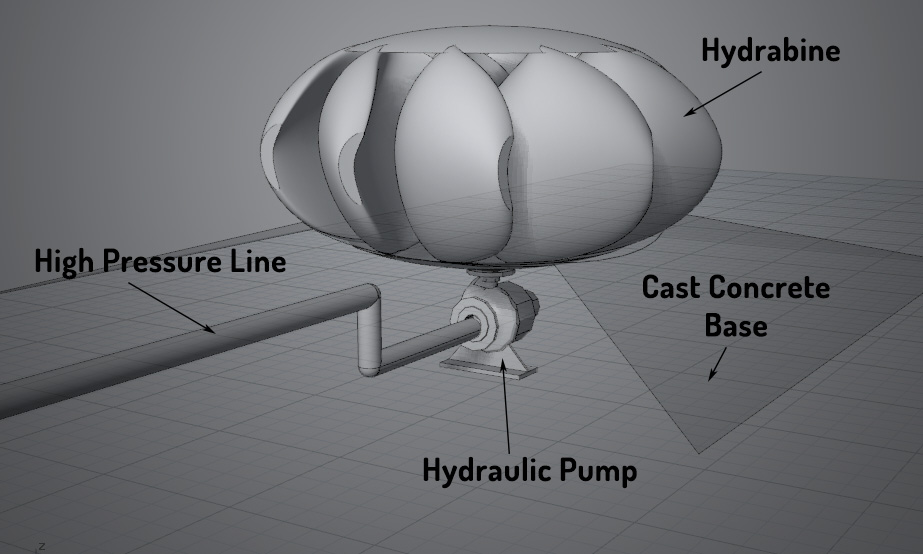 Hydroelectric power has been in service for over a century, but its origin, the water wheel, has been around for thousands of years. The ever increasing demand for renewable energies has encouraged engineers to find more ways to extract energy from the environment. One recent development is the Hydro Turbine aka. “hydrobine” which operated like a completely submerged water wheel in a stream.

A hydrobine can be installed anywhere there is moving water.

The hydrobine farms overcome many problem posed by other renewable systems. They are not visible from land, nor pose obstruction to people or sea animals. They are silent. The units are approximately 10 feet high and if installed in depths of 50 feet or more will not become a navigational problem for even largest vessels.

This depth also protects the turbines from direct exposure to violent surface storm conditions.
Rotating on a vertical axis, the hydrobine design reduces accidental entanglement with netting or anchors, allowing for ropes to "role off" the turbine. The turbine blades rotate at speeds slower than the ocean current. This means that marine life can swim out of the blades, eliminating marine fatality. The perimeter areas between the units can be buffered with rocks to reduce sand erosion while providing a desirable artificial reef. The turbine have the same rotation regardless of the direction of the current, making it a great candidate to takes advantage of tidal currents and rolling wave action.

Construction of the turbines can be cast from marine grade fiberglass and assembled on a staging barge. The base is constructed of cast concrete. They can be fabricated on land, barged to location and winched into position.

The power take off (PTO) is a robust hydraulic pump which can operate as an open-loop pumping sea water from the hydrobine farm to a near power plant under high pressure.

The closed-loop system uses Eco-friendly hydraulic fluid to transmit pressure to the generators. The advantages are no discharge; extended lifespan of the pumps, lines, and turbines; and overall lower cost to operate, manufacture, and install.

The use of the hydraulic system results in a very low power loss over long distance to the land facility. There are no electrical components submerged and minimal moving parts. This increases reliability while reducing maintenance.

Hydrobine Farm is an elegant and robust solution to the ever growing need for renewable energy and fresh water. This system taps into the oceanic conveyor which provides consistent power year round.