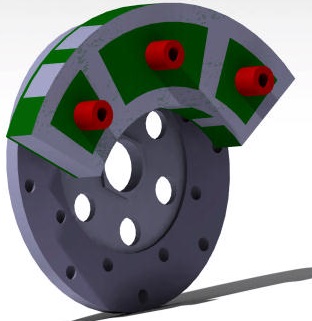 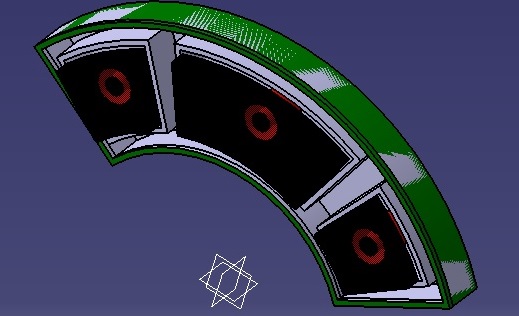 This braking system is an electro mechanical system with three split brake pads on the same caliper, each having its own brake line to actuate the piston corresponding to each brake pad and two solenoid valves to control the flow of brake fluid of the first and third piston only.

There is a pressure sensors mounted on the master cylinder whose output is fed to small circuit of IC. There is a speed sensor whose output is fed to the same IC. In case of speeds below 50kmph, the output of the pressure sensor is used to control the solenoid valves. In case of soft braking, only the central brake pad actuates and in case of hard braking, all the three brake pads actuates. For speeds greater than 50kmph, the output of the speed sensor is used to control the solenoid valves (all three actuated) and the ABS function of the brake. In case of ABS when the brakes are applied all three brake pads firstly gets actuated and after a certain interval of time the output from the IC to solenoid valves leads to closure of solenoid valves hence disengaging first and third brake pad, and ultimately resulting in decrease in the brake force.

This system also includes an ABS system which is made to work by the pressure difference in the system itself.

There goes a brake line from the mid of solenoid valve and piston in the cylinder to brake fluid reservoir. At the start of the lining there is an electrically/electronically controlled pressure release valve.

When speed is more than 50 kmph and as the driver applies brakes all the three brake pads actuate and clamps the disc. Now a signal comes from I.C. which makes the solenoid valve to close and just at the same moment the pressure release valve opens making the fluid to flow to the brake fluid reservoir which is at lower pressure as compared to brake line.

This makes the piston move and disengage.

Now after a certain time the solenoid valve opens, pressurizing the piston and again engaging it to the disc. At the same time the pressure release valve is closed via signal from the IC.

In this way the ABS system will work.

The advantages of this system over conventional system are as follows:

1. This system incorporates ABS technology without the use of any microcontroller chip which is expensive and more vulnerable to damage from moisture, heat and mechanical breakdowns.

2. The system results in less wear and tear of the brake pads hence resulting in longer life of the brakes.

3. Since the system is both electrical as well as mechanical, so if one system fails the other will work hence eliminating the chances of false braking as well as providing dual assurance.

4. The entire system is much more efficient, compact and less expensive as compared to any conventional ABS system available in the market.