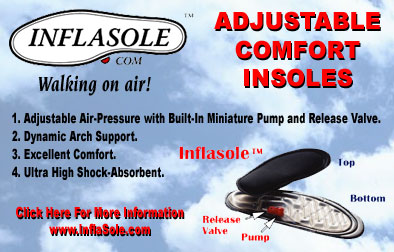 INFLASOLE™ also known as “Inflatable Insoles” or “Adjustable Comfort Insole” is removable shoe inserts/orthotics with a miniature air-pump and relief-valve assembly built-in underneath arch pillow, so wearers can adjust air-pressure, the softness of the insoles, according wearers weight and activities, such as: Standing, Walking, Running, Sports, etc.

Athletes who use INFLASOLE™ improve their performance – they stand taller and can jump higher. Back pain, foot and knee injuries, caused by frequent impact on hard surfaces, while running and jumping, are significantly reduced.

INFLASOLE™ is made of several polyurethane materials and several components and assembled with special tools and radio frequency (RF) machines. See www.InflaSole.com .

Unlike traditional orthotics the NFLASOLE™ provides Heel Support and Dynamic Arch Support. When wearer, during walking or running, puts weight on the heel of one foot, the air from heel area of the INFLASOLE™ moves in area with less resistance, which is arch area, and provides gentle push up at the arch of wearers foot. This motion is similar to walking bare-foot on the beach. Beside supreme shock-absorbency, it provides constant massage of the wearer’s feet.

INFLASOLE™ is good not just for treating hurting feet but as prevention from getting hurt.

INFLASOLE™ is the only insole/orthotics that enables heel spurs sufferers to inflate their INFLASOLE™ with enough air pressure, according their weight, so that their heel (heel bone) doesn't touch hard surface of their shoes, but rather float on air pillow.

Finally, wearers can walk on air and adjust the softness of the insoles, as they like. Just Pump-It-Up!

Pressure points are completely eliminated. Diabetics should consider having INFLASOLE™ in their shoes.

After many years of research and development (many designing and redesigning and testing and about $1.5 million spent) I do have developed product and organized limited production with prototype tools in my garage and I do occasional sales. For serious production on industrial level I would need the necessary budget for final production tools, working capital for organizing smooth production and marketing team. According my Business Plan - the investment of $5,000,000 dollars, after first year, would generate profit over $12,000,000 dollars and after second year over $64,000,000, dollars. At this time I am looking for partner(s) / investor(s) who are willing to contribute for launching the project on the next stage.