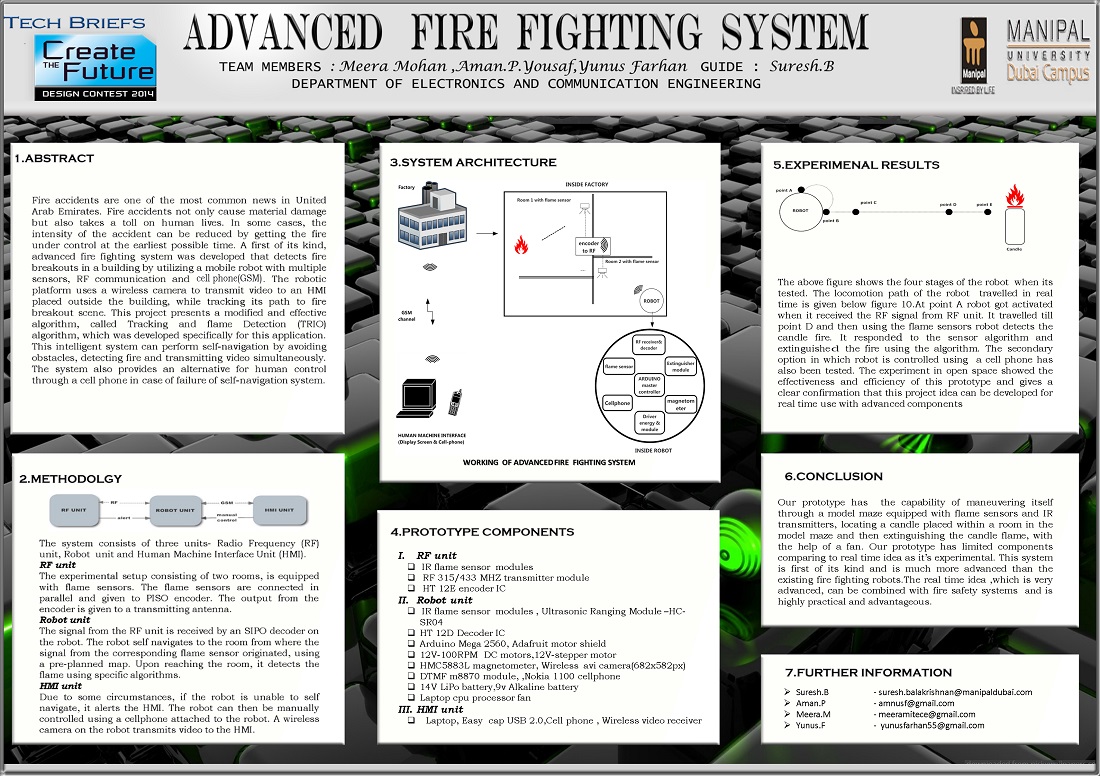 Fire accidents in unmanned warehouses is common news. The blaze break out in ‘PATCHI ‘ warehouse, Al-Quoz, UAE in September 2013 made to inquire about cause of fire & later paved the way to suggest solution to control the fire at its earlier stage.

The fire accidents not only causes material damage but also take a toll on human lives. Sometimes, the intensity of the accident can be reduced by getting the fire under control at the earliest as possible. Our suggestion for this common issue is installation of an Advanced Firefighting System.

This project idea can be used for controlling and helping the manual firefighter’s work up to an extent. This model has many more applications and is much more advanced than the existing models.

The project idea we try to implement is first of its kind. We are currently working on an experimental prototype. Prototype consists of three wheel Arduinomega2560 controlled robot with flame sensor modules, wireless camera, ultra sonic sensor, GSM/mobile with DTMF module, RF receiver unit and magnetometer. Installation of IR receivers & transmitters along with sensors inside the building and a Human Interface Module (HMI) is mandatory for this project.

At present fire detector or smoke detectors in a building will sense the fire after a huge variation in temperature which happens only after a huge fire break out. Our idea and prototype helps to detect the fire at the earliest stage and alerts the fire department and works to bring the fire under control up to an extent till the fire force reach the spot. Our prototype has the capability of maneuvering itself through a model maze equipped with flame sensors and IR transmitters, locating a candle placed within a room in the model maze and then extinguishing the candle flame, with the help of a fan. Our prototype has limited components comparing to real time idea as it’s experimental. This model has many more advantages and very much advanced than the existing models .Some of the major advantages of this type firefighter robots are:

1 As it has a preinstalled map & initiated by signal from particular flame sensor, the robot takes less time to find the exact place.
2 Flame sensor can help to find the intensity and exact point of the fire origin in a room - time efficient.
3 If self-navigation fails, GSM mobile phones are used for manual control. GSM has wide coverage, it’s very efficient.
4. When a flame sensor initiates a robot at the same time the GSM module generate automated sms to stored contacts of fire & rescue authorities, ambulance services, etc.
5 Fire-proof body will make robot immune to fire during firefighting.
6 Add on features like timely water refilling, accurate GPS navigation and use of solar charged cells can turn it to be a stand-out application which is highly efficient.

Installation of this type of firefighting system in any warehouse is suggested from the view of an engineer with social responsibility.