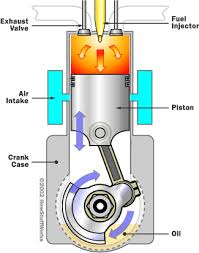 This design is other technologies depend which StClaire is also responsible for. Other lubricant maybe be used.

I lubricated with Nano-Oil

2- Piston + between its rings

The oil was as an insurance against premature failure.

I jokingly call this small amount of Oil "an Homeopathic dose" .

1- Capture both side of Lower tie rod connection to CrankShaft with a reservoir type O-Ring sealed encompassment.

Seal: Elastomer to be determined in light that the lower chamber is either in negative atmosphere (relative vacuum) during intake & medium pressure during injection to piston chamber so heat is relatively no concern ,

Hydrocarbon compatibility in selecting the seal is more important in this location so Hypalon could be good options.

Such Hex Fill Plug will be accessible through a window through the lower compression / crank chamber @Bottom Dead Center,
it will also be sealed with O-Ring Seat but bigger then the crank oil chamber for extraction purposes so 7/16-20 Red Silicon Elastomer circa 90 durometer)

Same to be implemented to Upper Piston Tie but made of Titanium or Aluminium to increase reservoir capacity & reduce overall weight of this addition both in hardware & oil content, since this location will be rather inconvenient to replenish Nano-Oil if necessary,

( just do not know if this could be a life long implementation without refilling, destructive tests will reveal that aspect

Now the hard part, lubricating the upper & lower piston chamber , above & below the rings

I envision 3 possible methods which I will not elaborate on at this disclosure due to time constraint.
1- sintered material pulsing Nano-Oil or equivalent at the right timing between the 2 piston rings
2- the lubrication could come from the piston itself.
3- just an electronic timed release say every 10,000 RPM
Treat all exposed areas exposed to the burn cycle + all passages to exhaust gas with heat reflection treatment.
This 2 stroke engine could have another chance at being accepted on lakes & bodies of water that banned their use some time back.
I chose not to submit drawing or animations since there is nothing to it.
So goes the challenge.