Aligment of the Spine Tracker 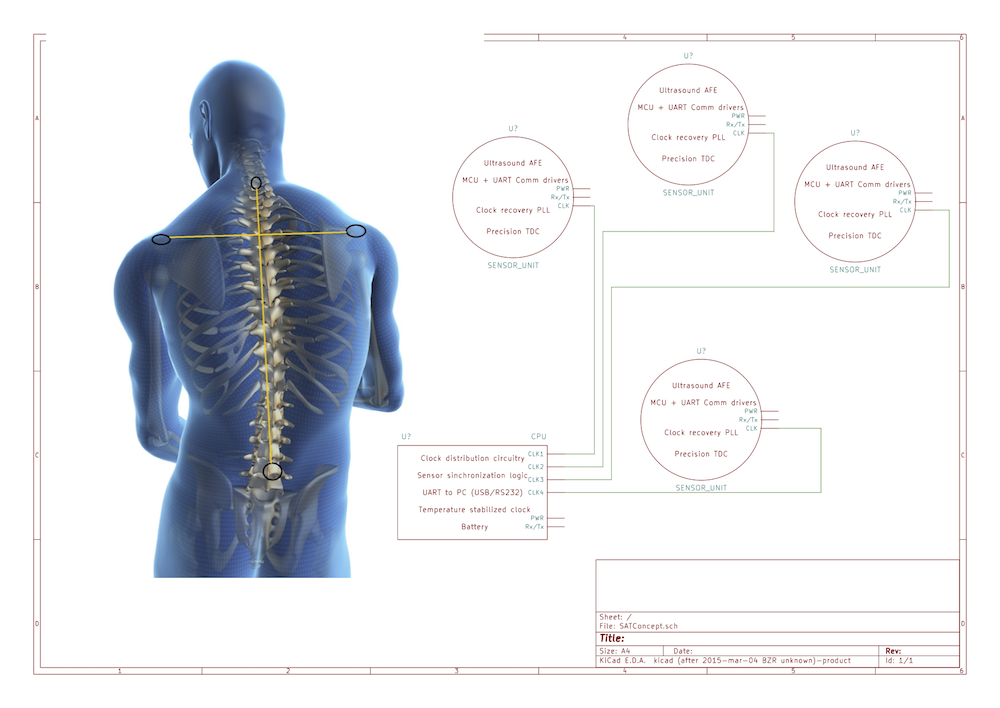 The proposed design is intended to improve the health of the user, in particular their spine alignment during daily activities. Sizable amounts of resources are used to avoid ergonomically induced injuries and this device will help track the user’s spine alignment and give real-time feedback, allowing an immediate response by the user and promoting a self-correcting attitude towards posture whether is at work, sitting on an airplane or while conducting any other routine activity that we repeat over and over every day.

In order to form an image of the human spine, an array of ultra-sonic transducers are used. These transducers are fixed to the skin at the points of the bone structure where alignment information can be recorded. Places like the tip of the shoulder blades, the base of the neck, the lower back are candidates for such placements. To obtain the relative positions of the transducers with respect each other, a synchronized scheme of operation is required. Each one of the sensor in the array will transmit a signal in a round robin fashion, while the remaining sensor units are placed in receiver mode to acquire the ultrasonic stimulation. The key to obtaining acceptable performance in terms of special resolution is to synchronize all the sensors to the same clock. This way the time for the sound to travel through the air next to the skin can be accurately measured.

The choice of using ultrasonic based location system is relevant and was reached by a disqualifying thought process of the alternative techniques. As an example, an alternative capacitive based location technique is usually used in application that either measure the distance of a target object or simply detect its presence. In this application the information resides in the relative position of each of the sensing elements in the array.

A precision synchronization structure among sensors will be one of the manufacturability challenges for this design. A central processing unit (CPU) will generate a clock signal (10MHz) and this clock should reach each sensor unit with a controlled amount of jitter, so the back calculation of distance between sensors is accurate. The sensor unit will have the capability of keeping track of time, and a software algorithm running on each sensor unit will decide when it is the turn for a the sensor element to act as transmitter or just listen for other sensors. The information acquired (list of times when the ultrasonic signal was detected) will be transported back to the CPU with a high-speed digital path, either using cables, wirelessly, or using flex PCBs. The clock signal and sensor power could travel along this signal paths as well.

I hope that this brief summary conveys the idea that the health of a person is ultimately their own responsibility and this device is intended to report information to the user in a real-time fashion, allowing a personal decision making process to take place when it comes to posture and spine health.