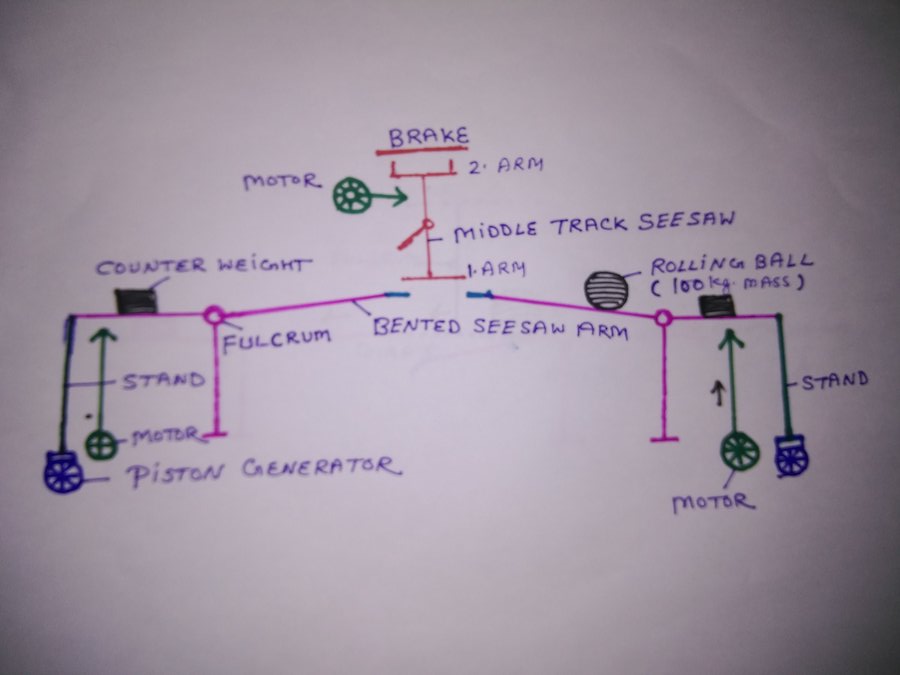 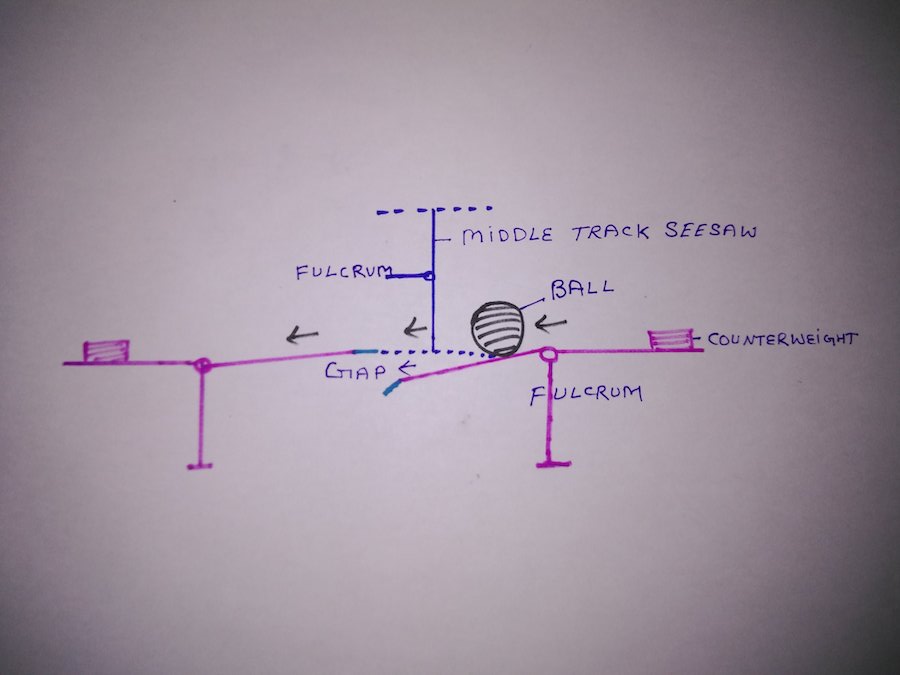 This machine is based on gravity power and seesaw system. We can make it more simple.
As per sketch there will be two seesaw systems and both will be attached with a stand.This stand will work to hold the seesaw. There will a middle track (MIDDLE TRACK SEESAW) which will work a pathway to transport the object from one seesaw to another seesaw.

There will be two motors which will work to incline both sides of the seesaw systems by pushing the counter weight side of each seesaw.

In this way each seesaw will work by their turn.

I would like to insist on some following points.

(1) The Stand will work to hold the counter weight so that the seesaw couldn't be imbalanced after unloading the object.
(2) We can set up a generator under the counter weight to generate energy or can get gain due to kinetic energy of ball..
(3) The length of middle track will be less than the length of arm of seesaws.
(4) The motors will work to push the counter weights towards upside.
(5) We can take the object(Rolling Ball) mass from 100 to 1000 kilogram or more as we all know that if a seesaw is balanced then we can lift up or lift down it even with the power of our finger tips. I would also like to attract your attention on a mechanical advantage of rolling ball and its distance from fulcrum.When motor will lift up the counter weight arm of seesaw and ball will get rolling down then the rolling ball will also apply a force as it will move further from fulcrum.
(6) The middle track will also work like a SEESAW system and will work as a bridge to fill the gap between Left and Right side seesaw when seesaws will be inclined.
The middle track seesaw either get energy from a motor or directly connected with both side seesaw when counter weight arm will be lift up then this arm will also work to lift up the second part of middle seesaw and middle track Arm will be come down to work as a bridge.
(7) This design will work as a free energy device. The counter weight arm of both side seesaws will work to generate electricity when this counter weight arm will hit the piston generator then the generator will work to produce energy.
(8)Friction will be not an issue in this design BECAUSE THE LENGTH OF MIDDLE TRACK WILL BE LESS THAN BENT ARMS AND ABOVE ALL DEPEND THE VELOCITY OF BALL.
(9) Use potential energy formula when stand attached with counter weight (100 kilogram).