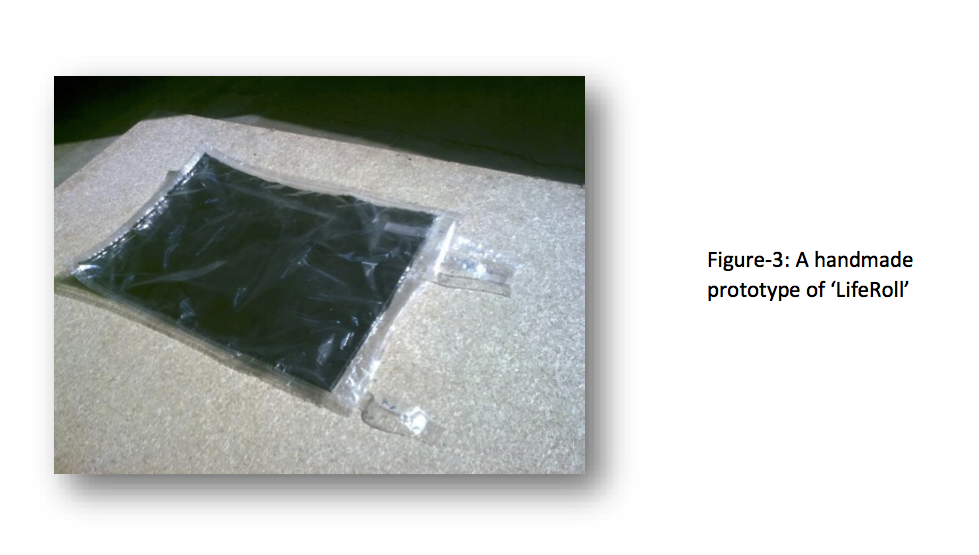 Fresh surface water mostly is contaminated by diarrhoeal pathogens. This vast source of water can be rendered safe for ‘point of use’ drinking application using our low cost solar water Pasteurisation device, ‘LifeRoll.’ Collected rainwater can also be Pasteurised to make it safe for drinking. LifeRoll is made of polythene sheets following our innovative design. When not in use, the device can be deflated and rolled into a small package for easy storage and transportation. It can also be part of a disaster kit or can be air-dropped in disaster areas to save lives, hence the name, ‘LifeRoll’. Traditional low cost filters do not effectively remove harmful diarrhoeal pathogens. No existing device at such a low cost offer facilities as the LifeRoll.

The LifeRoll (Figure-1: Schematic, Figure-2: mechanism, Figure-3: handmade prototype) has been designed based on the insight developed through years of research and field implementation of low cost solar water Pasteurisers, which were supported by extensive microbiological tests. The LifeRoll lies horizontally on a flat surface and is made of four chambers (Figure-2), the top two and the bottommost are for air, blown in by mouth, while the third form the top is to hold the water to be treated. The bottom of the water chamber is made of a black polythene sheet while the others are made of transparent polythene sheets, all food grade. Tubes come out of the chambers, one each for the air chambers and two for the water chamber. The latter allows air bubbles to be pushed out from the water chamber, which is necessary. Absorbing solar radiation, the black sheet heats up which in turn heats up the whole water layer immediately above through conduction and convection. The upper transparent polythene covers allow visible and short wave infrared radiation from the sun to pass but blocks the long wavelength infrared radiation given off by the heated water, thus trapping in heat; the well-known ‘Green House Effect’. Heat loss is prevented through the air chambers below and above the water layer. Our prototype LifeRoll gave above 650C in two hours of clear sunshine, more than 600C needed for Pasteurisation. UV from sun also penetrates the water in a LifeRoll destroying diarrhoeal germs even at lower temperatures.

LifeRoll can be easily manufactured using a die for heat-sealing of polythene sheets, and can be produced in large volumes at low cost once the die is perfected. A 2ft x 3 ft LifeRoll, giving about 10 litres, would be adequate for the daily needs of a family. Costing about US $2 when volume produced, a LifeRoll can be used for many months and can be used during normal periods as well as during disasters and emergency situations. Even flood water can be rendered drinkable. Adventurers may also use this device. Therefore, LifeRoll has a large global market, particularly for the rural population in the low resource countries and as a part of disaster and trekking kits all over the world.