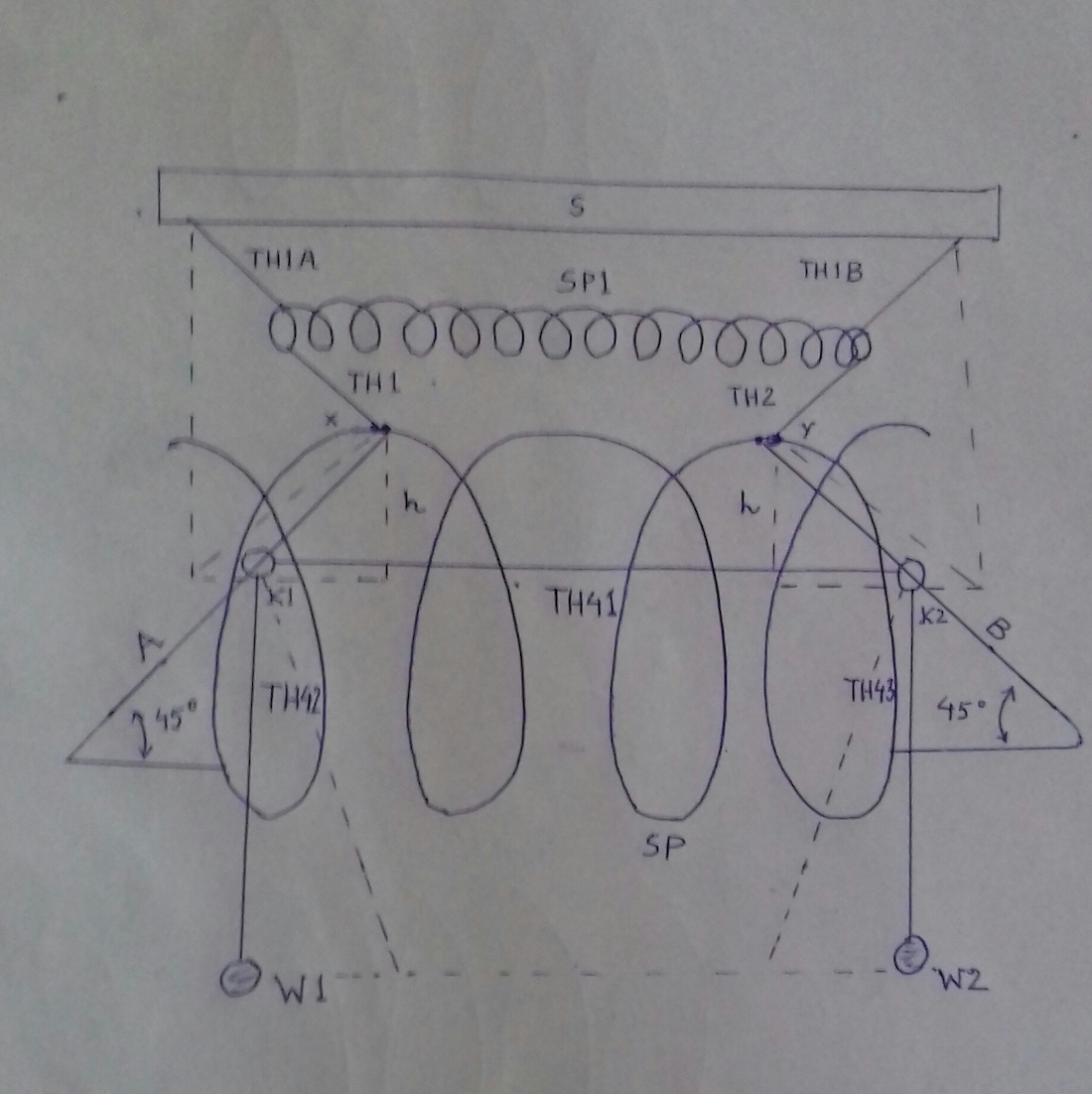 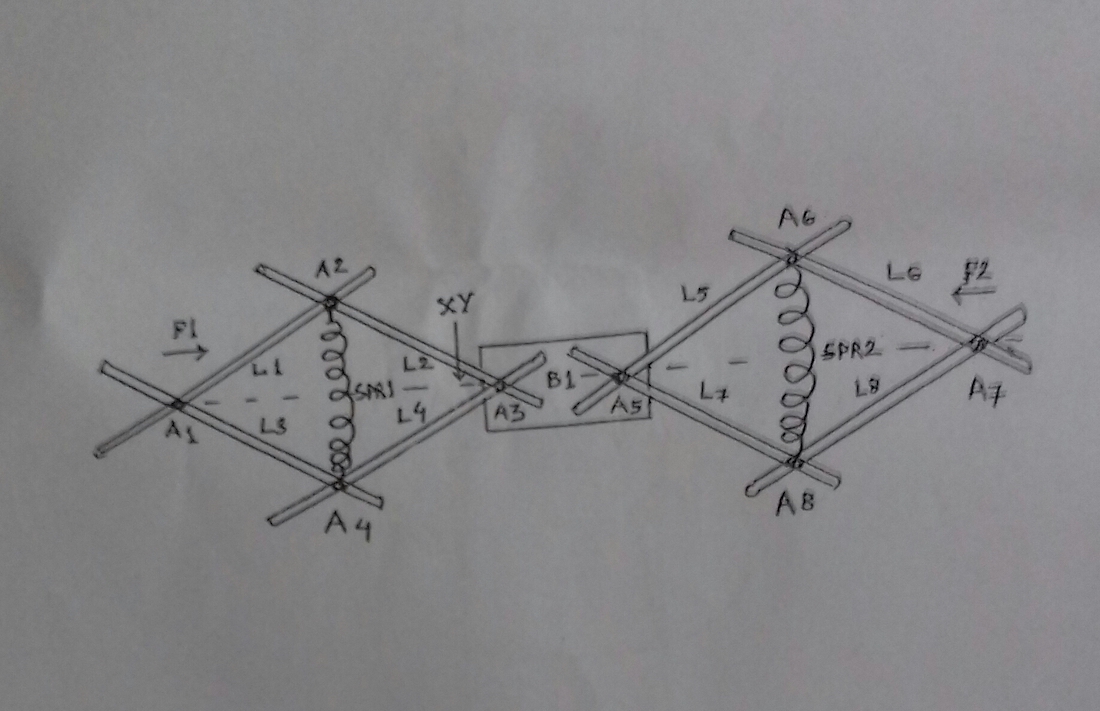 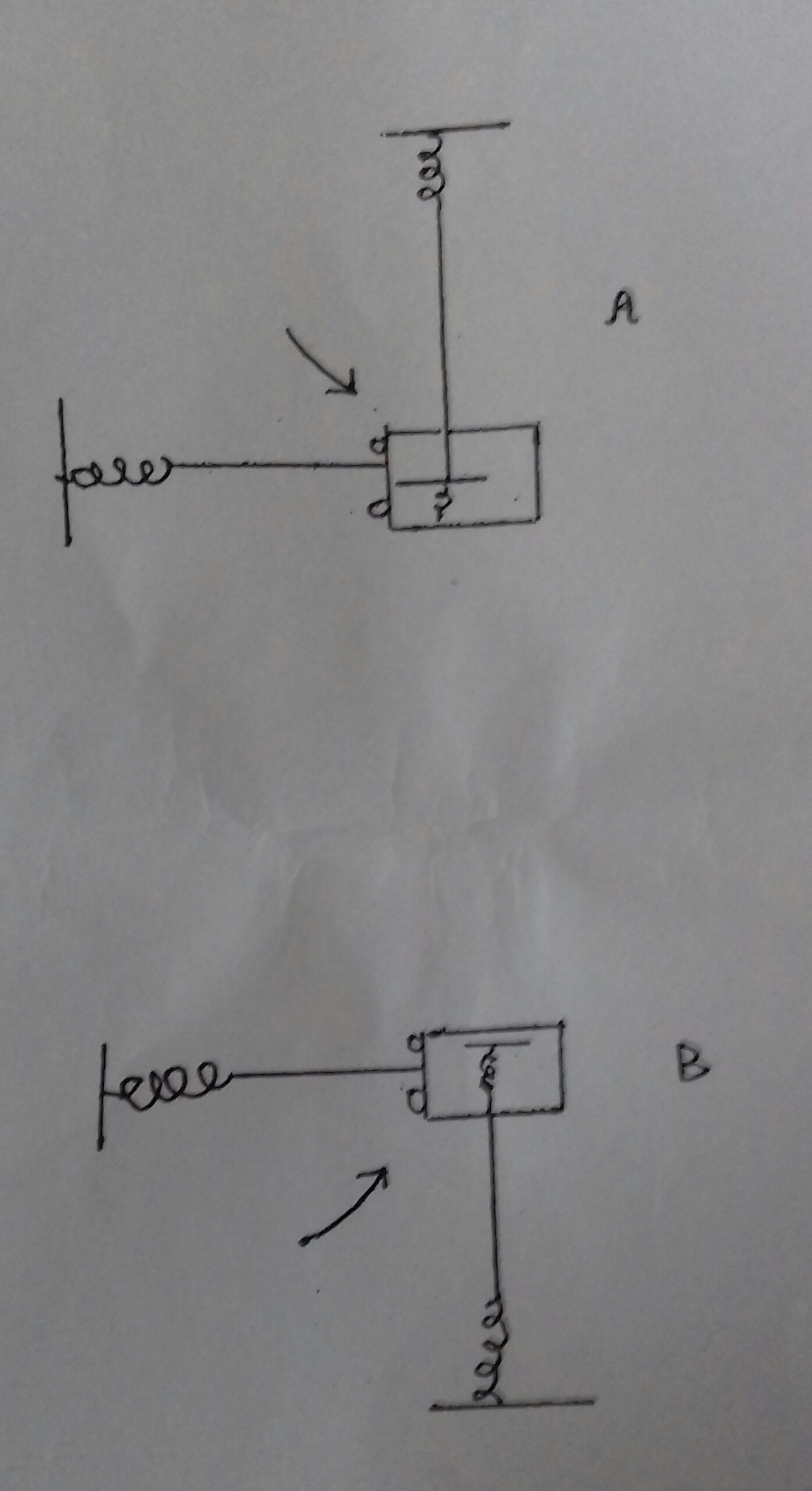 This is an updated version of the entry to create the future design contest 2017. This design of increased efficiency has plane A and B in the form of solid rods as in image 1 inclined at 45 degrees and fixed to both the outer diameter of spring SP. Equal weights W1 and W2 suspend from threads TH42 and TH43 of equal lengths parallel to direction of gravity. They are interconnected by thread TH41 perpendicular to the direction of gravity and capable of sliding on plane A and B by knots k1 and k2 as in image 1. As spring SP compresses perpendicular to the direction of gravity due to the horizontal component of weights W1 and W2 tension in thread TH41 tend to decrease and weight W1 and W2 tends to slide downwards along inclined plane A and B. Lower end of TH1 and TH2 are fixed to point X and Y at the upper and outer end of spring SP. The upper ends of thread TH1 and TH2 are connected to lower and outer ends of spring SP1.Thread TH1A and TH1B extend from upper and outer diameter of spring SP1 to support S (this increases the distance moved perpendicular to the direction of gravity).As thread TH1,TH1A,TH2,TH1B are fixed to ends of spring SP they tend to lengthen as spring SP compresses perpendicular to the direction of gravity and tension in them tends to increase as they are lifting component of weight W1 and W2 through specific distance h. But a component of weight W1 and W2 is not supported even at the position of rest (due to the tendency to slide downwards along the incline plane) and tends to sink downwards in the same relative space due to inertia of motion in the 4th dimension of time in keeping with the first law of motion. The power of the mechanism can be increased by interconnecting more and more of such units such that thread TH42 and TH43 are angulated inwards at connections in keeping with symmetry of the mechanism. Connecting springs to store energy between thread TH1A, TH1B and final support S enables time reversal with respect to the rest frame of reference. The mechanism then arranged in two mutually perpendicular directions theoretically allows teleportation between reference frame A and B as in image 3.The updated versions is of increased efficiency then the version in 2017 contest and seems to enable low cost overunity power generation, warp drive, teleportation, feasible and real time travel for human subjects as already discussed in the 2017 version.