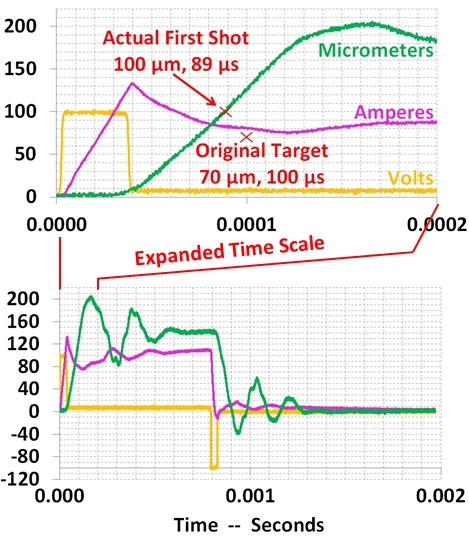 In the early 2000s, increasing the speed at which a fuel injector could open and close helped reduce emissions. A faster solenoid was needed to more rapidly shuttle the injector servovalve which in turn directed fuel pressure to only open or close the injector needle. First applied to injectors in 1913, physics limits solenoid speed.

United States Patent 7,255,290 embodies a theory for how to speed up the servovalve using a different actuator technology. After 7,255,290 issued, GPDT was incorporated to test the speed theory.

Needle speed is proportional to the rate at which current increases or decreases.

The original speed demonstrator was an actuator only, a test of the speed theory. It used fuel pressure to highly preload the actuator per the theory. Speed and lift significantly exceeded prediction. For a full test report, refer to SAE paper 2011-01-0381.

A stock solenoid injector was tested for comparison. The GPDT injection profile was a pilot followed by a main charge. The difference between one set of runs is that the pilot lift was varied by one micrometer. This cause was followed by effect: the delay after the pilot after which the main charge ignited varied linearly with pilot lift, a clear demonstration of the fine control GPDT's actuator possesses. (Fig. 3)

How GPDT's Technology Enables Cost-Effective Implementation of Carnot and Diesel

Continuously vary fuel injection rate by lifting needle to any position at any speed, without bouncing.