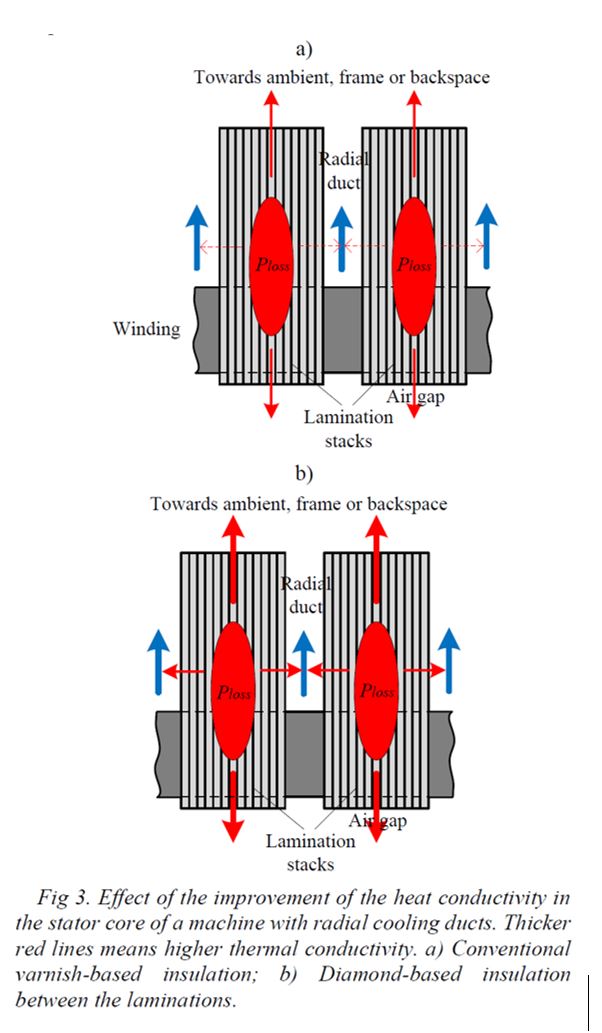 This idea is not patented, but it has been published for the scientific community. It was first published a few days ago at the EPNC 2018 conference and an extended paper has been submitted for journal publication.

During the process of cooling, a large part of the heat generated by the losses in the machine is conducted through the iron core. All the iron losses and a significant part of copper losses generated in the windings should pass the iron core in order to be conducted to the fluid regions where the losses are finally dispersed into the cooling medium. There are two main directions along which the heat is conducted through the iron core, radial and axial direction. In the case of conduction in radial direction, the heat is transferred radially towards the air gap and the outer stator surface. In the case of conduction in the axial direction, the heat is transferred towards the radial cooling ducts (if the machine has them) and towards the end regions of the machine. At this point we should mention that in order to limit the existence of eddy current losses, the iron core has a laminated structure. This laminated structure causes a high level of anisotropy regarding the ability to conduct heat in different directions.

The largest benefit of a diamond-based core insulation is in electrical machines in which the losses are conducted axially to the coolant. These are machines with radial ducts and effective cooling in the end regions. The main benefit will be in reducing the number of radial ducts that positively affects the size, production costs and the copper losses of the machine. The diamond enriched insulation also improves the cooling due to conduction in radial direction of the lamination stack, toward air gap and ambient.

There are many options of how to implement a diamond- based insulation in the space between the laminations: