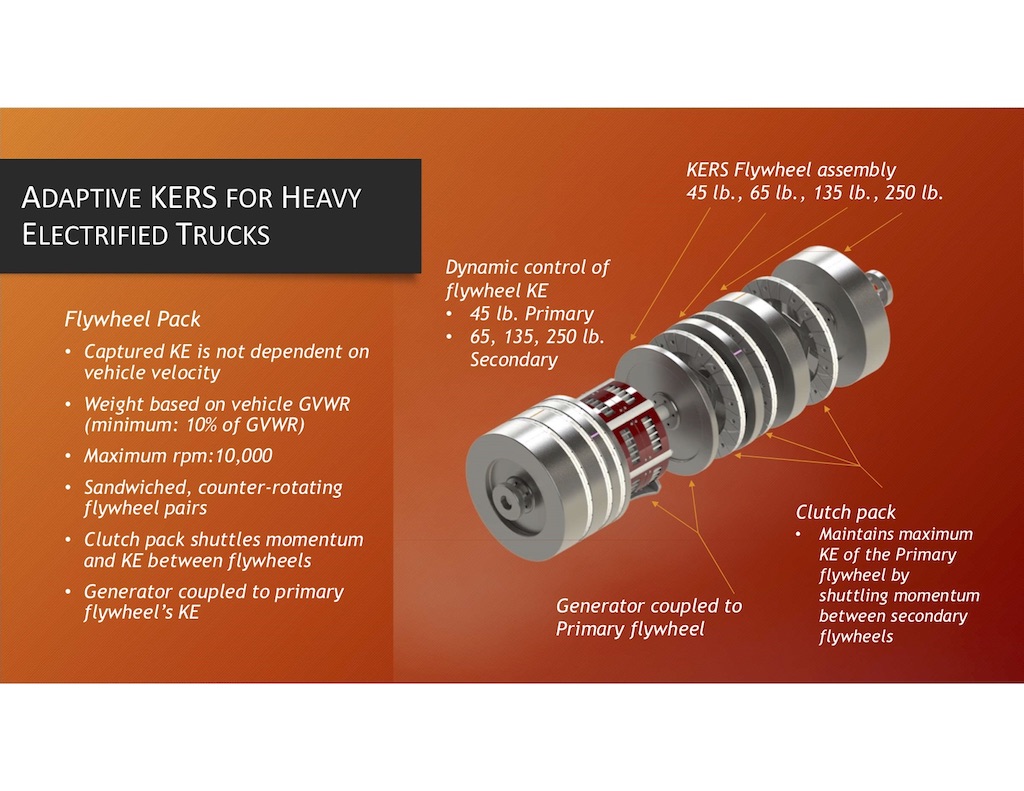 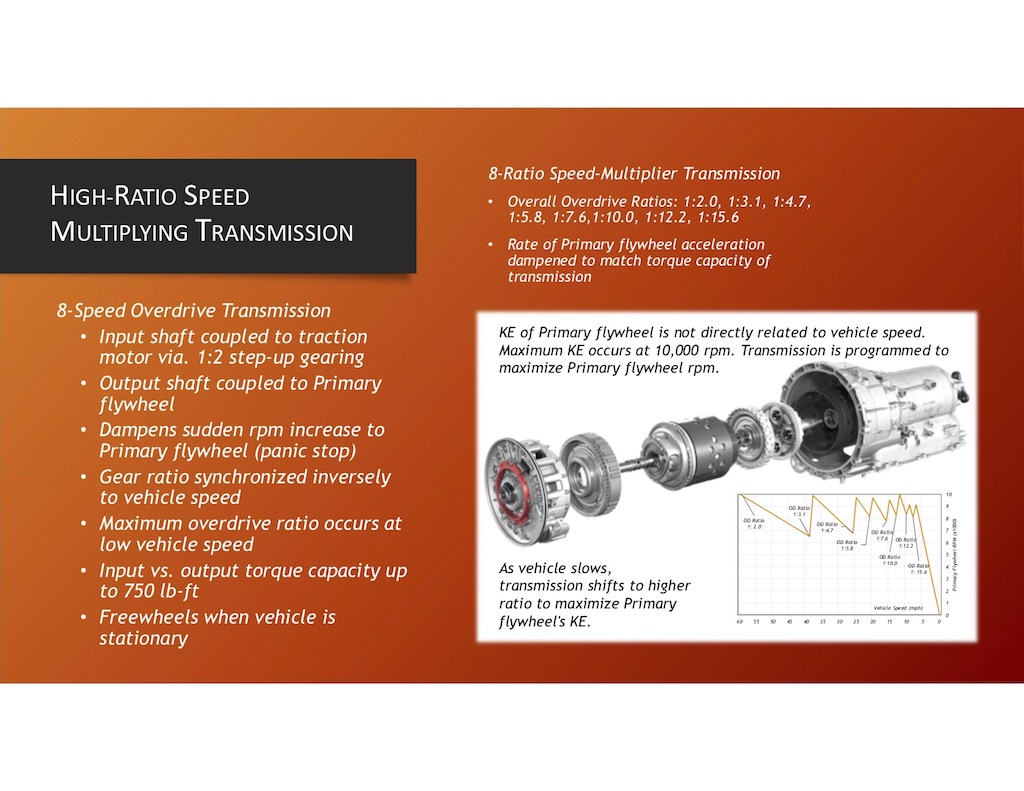 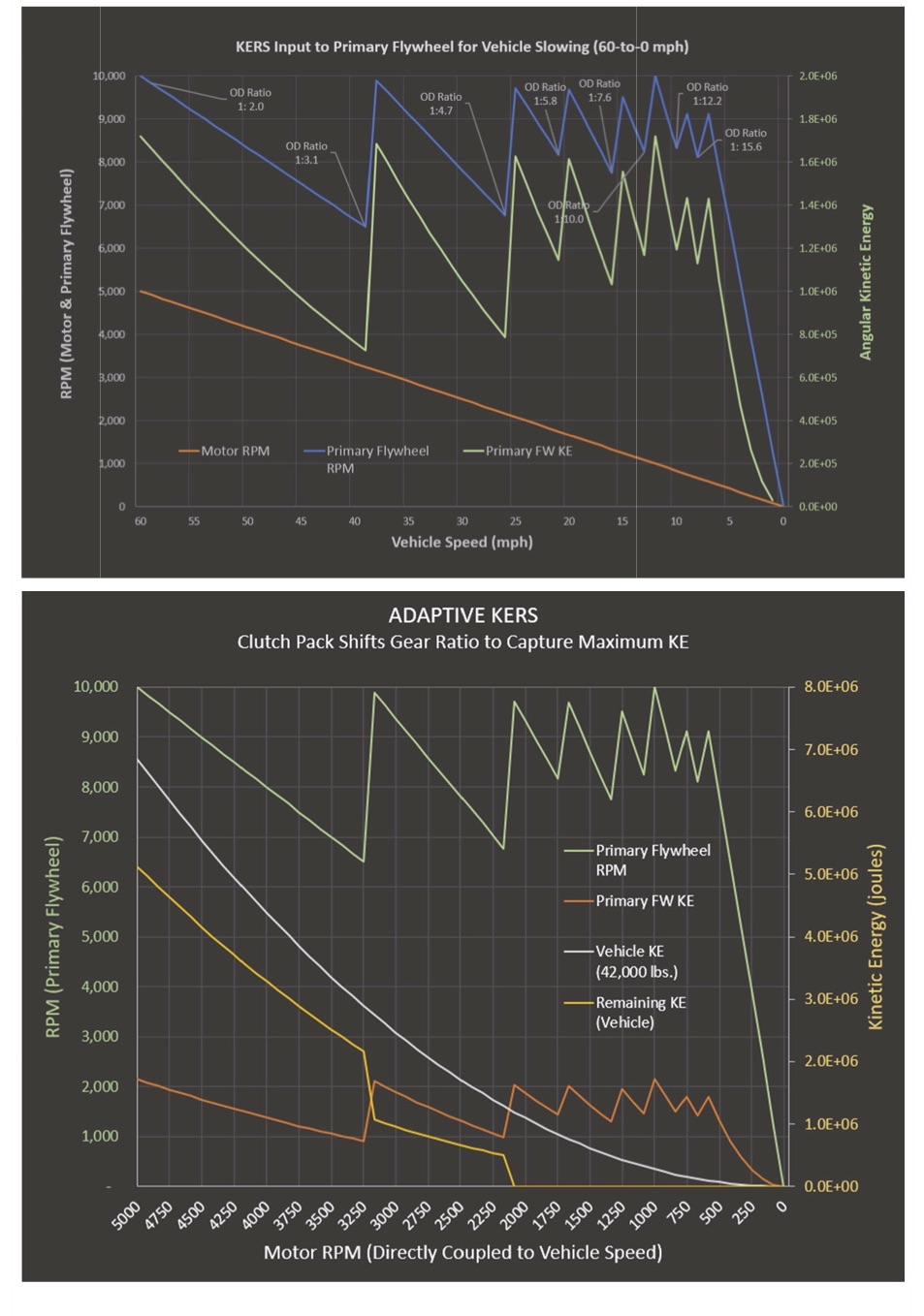 THE PROBLEM:
Inefficient capture, storage, and use of a vehicle’s kinetic energy (KE).

Specific issues include:
A. CAPTURING & STORING A VEHICLE'S KINETIC ENERGY:
Vehicles that experience frequent stop-and-start conditions have massive kinetic energy losses.
B. BATTERY TECHNOLOGY:
Batteries can supply current (discharge) at a far higher rate than they can absorb current (recharge).
C. TRACTION MOTOR USED AS A DYNAMO:
When a vehicle stops, its traction motor cannot function as a dynamo.
D. VEHICLE WEIGHT:
For a given velocity, light vehicles have less kinetic energy than heavy vehicles.

THE SOLUTION:
A. CAPTURE and STORE a VEHICLE'S KE as ANGULAR KE and ANGULAR MOMENTUM:
1. Vehicle's KE is captured and stored in sandwiched pairs of counter-rotating flywheels (FW). The flywheels share a common axis. Adjacent FW pairs double/halve in weight; e.g. 40 lbs., 80 lbs., 160 lbs., 320 lbs.
2. Input to the Primary FW (the lightest) is via an 8-speed, high-ratio, speed multiplying transmission. The transmission’s ratio is inversely related the vehicle’s speed.
3. The Primary FW’s function:
a. Capture the vehicle’s KE as angular KE
b. Maintain its maximum angular KE by transferring/absorbing angular KE and/or angular momentum from the massive secondary FW pairs.
c. Input shaft to the electric generator.
4. During braking, the vehicle’s KE is passed via the traction motor through the transmission, then to the FW assembly.
B. BATTERY TECHNOLOGY:
A-KERS adapts to current battery technology by storing angular KE for use when the vehicle is stationary.
C. TRACTION MOTOR USED AS A DYNAMO:
A-KERS freewheels from, and does not use, the traction motor as a dynamo.
D. VEHICLE WEIGHT:
A-KERS is scalable and intended for electrified vehicles weighing more than 10,000 pounds.

MARKETABILITY OF A-KERS
Designed for new, electrified medium and heavy trucks
A. Focused on medium and heavy weight, short-haul vehicles, e.g. refuse trucks, package delivery vehicles, cement trucks.
B. Scalability:
1. The weight and size of the system is not fixed. Its weight must be at least 10% of the vehicle’s weight.
2. Normalizing a vehicle’s KE ensures that A-KERS performance does not degrade with extremely heavy (400,000 lbs.) or extremely slow electrified vehicles.
C. The system’s performance improves with frequent stop-start conditions.
D. With proper scaling, over the road vehicles traveling 60 mph can expect to store 4-times the vehicle’s KE. This equates to the vehicle slowing and stopping from 60 mph four (4) times.
E. The scalability, its use of angular momentum and angular kinetic energy means the system is not limited to vehicles. Massive energy losses exist with shipping container cranes, coal mine cranes and trucks.