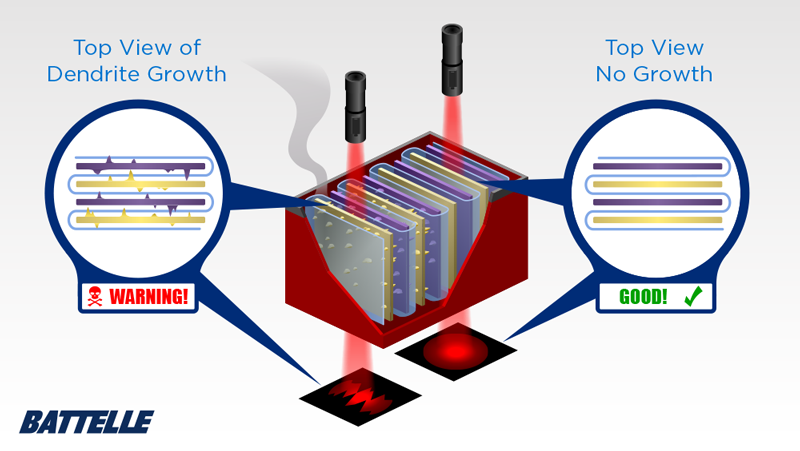 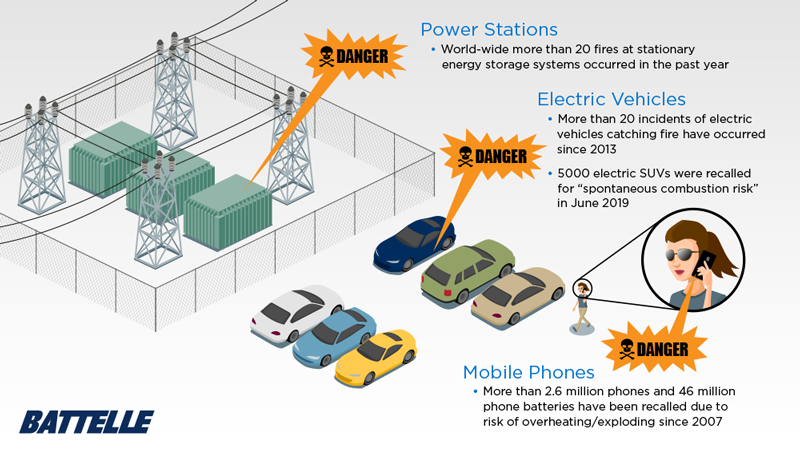 When batteries catastrophically fail, they can overheat, rupture, and or explode. Susceptible lithium ion batteries are everywhere - in consumer products like e-cigarettes, mobile phones, and electric cars, as well as in airplanes and facilities for alternative energy storage. Failures bring serious consequences:

-From 2015-2017, e-cigarette injuries sent more than 2,000 people to the hospital across the U.S. Several incidents were disfiguring or fatal. https://tobaccocontrol.bmj.com/content/28/4/472

-In 2016, Samsung recalled more than one million Galaxy Note 7 phones after at least 35 reports of overheating or exploding batteries worldwide.

-In May 2019, Tesla issued a software update to adjust battery settings in Model S and Model X cars after videos of cars bursting into flames in Asia became public.

-An explosion at the McMicken Energy Storage facility in Arizona injured 4 fire fighters in April 2019. While the cause is still under investigation, battery failure is a possibility.

Other well-documented malfunctions include electric scooters and hover boards, and Boeing's 787 Dreamliner.

Widespread battery use and the risk of failures have made battery safety a growing concern among consumers, manufacturers and regulators. Today, checks are performed by checking the voltage of a whole battery cell. Unfortunately, this method only detects potential faults when it is too late.

Battelle’s Create the Future invention is a simple, cost-effective sensor for detecting onset of battery faults early, during charging and use, without negatively affecting battery performance.

A major cause of catastrophic battery failure is the growth of “dendrites.” These are small metal protrusions that grow from an electrode. In a standard battery, there is a separator between electrodes, but when dendrites get big enough, they can pierce the separator, span the gap between electrodes, and cause a short circuit. Battelle’s technology uses the battery separator to help visibly detect when dendrites start to form. We shine light into one side of the separator and monitor the transmission of light out the other side. Without dendrites, the path of the light beam is not blocked, giving a “normal” light pattern. When dendrites are growing, they block some portion of the light, altering the normal pattern of light transmission. This changed light pattern indicates the dendrite’s presence. The key element to making this “optical wave guide” sensor work is to match a key optical property of the electrolyte and separator, known as the refractive index.

Battelle’s invention is the first to provide local detection of dendrites in an operating battery. By reducing the risk of faults going undetected, the battery can be charged higher and longer, enabling longer run times and use life. Our sensor can also reduce need for other safety elements in the overall system, lowering total system costs. We estimate these benefits in safety, performance, and system cost can be incorporated for less than 10% of the battery cost. Further, Battelle’s separator-based sensor can be used in emerging high-energy density, lithium-sulfur and lithium air battery chemistries, which store even more energy than lithium ion batteries and are also are challenged by dendrites.