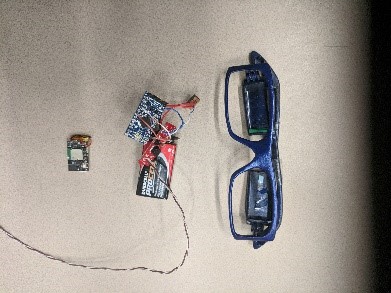 The Problem
Vertigo and dizziness are among the most frequent complaints seen in Emergency rooms and outpatient clinics. While most individuals experience impaired motion perceptual cues from a vertigo/dizziness attack for several seconds. As many as 2.6 million Americans with a diagnosis of an inner ear (vestibular) disorder such as Meniere's Disease, Vestibular Migraine, or Mal debarquement syndrome suffer from persistent impairment for several hours. The problem for these individuals is that current rehab and therapeutic solutions available either yield incomplete recovery or produce sedating side-effects. Consequently, they can be forced to spend as much as ¼ of every month dizzy without an effective tool to manage their symptoms and get them back on their feet as quickly as possible.

The Solution
My idea is to create a non-invasive neurostimulator applied at both mastoids (back of the ears) that can be self-administered to suppresses the impairment from a vertigo attack through low electrical stimulation of the peripheral vestibular organ. Designed in the form factor of glasses, the electrodes of the Bluetooth capable device that are embedded in the temple tips will enable easy and repeatable delivery of stimulation to the vestibular organ. On their own, these electrical signals would produce an "illusionary" sense of head movement in specific directions depending on the electrode montage. So, the device will support two electrical montage configurations for binaural bipolar or monopolar stimulation, that will be automatically selected based on the user’s description of their impaired perception. The binaural bipolar configuration would illicit perceptual cues associated with side to side movement, while the binaural monopolar configuration would prompt sensations of front to back movement. The description of the impaired perceptual cues created by tracing on the screen of a mobile application will be combined with real-time inertial sensor data from the glasses to approximate the optimal electrical stimulation pattern’s phase, amplitude and direction that will produce a counterbalance "illusionary" cues. Effectively canceling out the impaired perception of lingering motion cues in as much as 10-15 minutes of stimulation.

Additionally, by enabling the replay of previous of trace patterns (electrical stimulation patterns) from the same user it would be possible to leverage the neuroplastic nature of the brain to heighten their tolerance to future vertigo attacks.

Impact
As a consequence of potential spending ¼ of every month dizzy, people suffering from recurring vertigo attacks have reported losing as much as $10,000 every year in wages and repeating medical expenses in excess of $1500 for rehabilitation and treatment of their symptoms. In addition to the financial impact, high rates of anxiety and depression are also common to this segment of people. Therefore, by creating a tool that may effectively manage vertigo symptoms, nearly 2.6 million Americans will be able to lessen the financial and physiological impact from persistent dizziness.