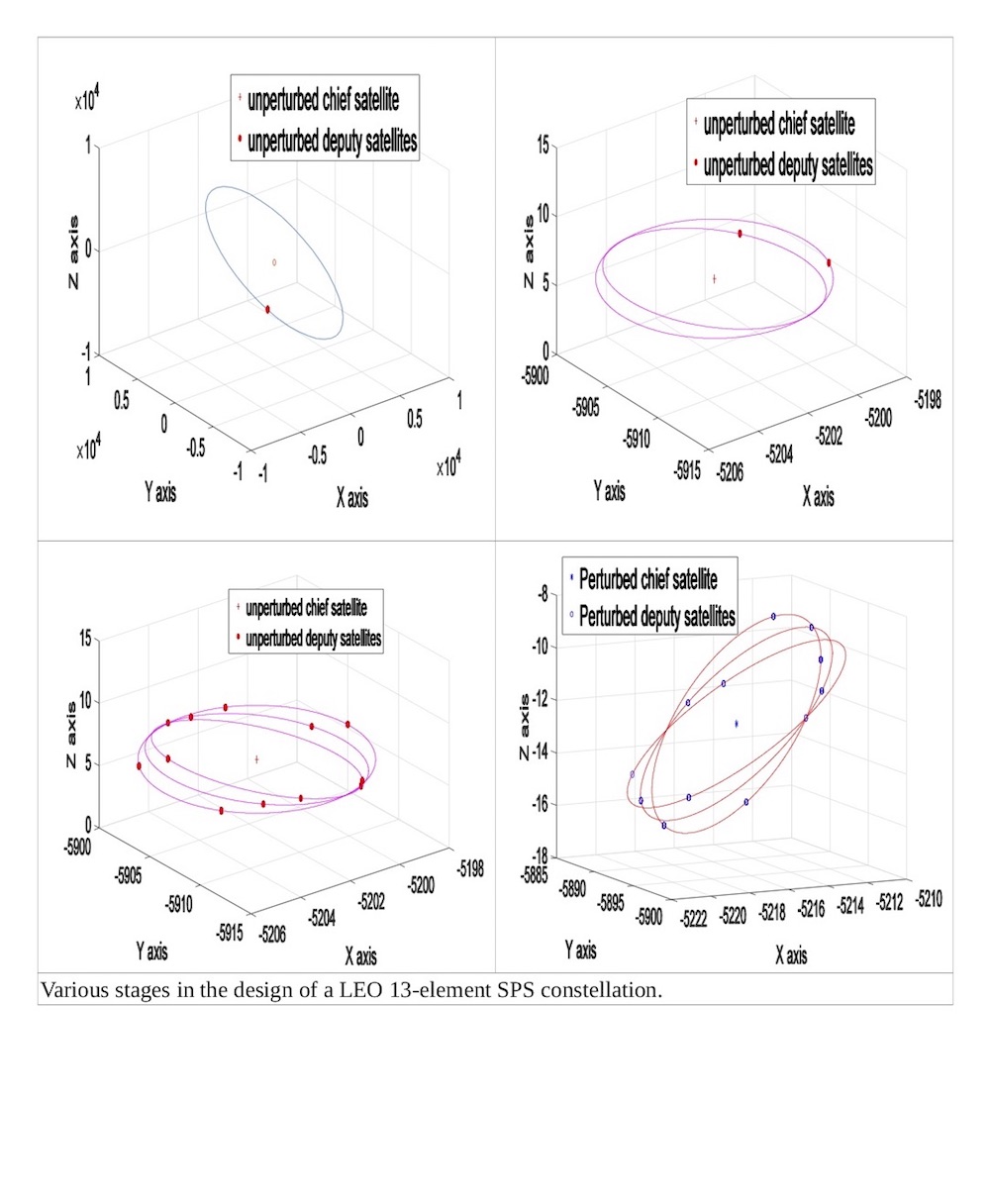 A solar power satellite (SPS) constellation is an impressive way to transform the Sun's radiant energy into electric power when efficiently streamed down to Earth. The generic SPS has long been promoted as a potent solution for the ever increasing global energy demands. It certainly is a non-polluting and independent method of harvesting energy from the Sun's intenst radiation, as against many other terrestrial sources of energy. Conventional concepts of the SPS have all considered a single large satellite to be located in geosynchronous or geostationary orbit (GEO), at distances of 36,000 km. Given the significant power attenuation and loss during transmission that is expected across those distances, such an arrangement is fit to be replaced with a greater number of satellites in low earth orbit (LEO) resulting in a satellite formation flying.

One such formation design is presented here, which consists of 12 deputy satellites that are in different inclinations of virtual suborbital planes with reference to the chief satellite. This model simplifies the complexity encountered during assembly of even larger numbers of satellites in any given plane. Additionally, the probability of osculation of the power beams is also diminished, which is a significant issue with some other constellation models. Locating the satellites in different suborbital planes, in the manner described, also reduces the possibility of collisions when increasing their numbers per plane. As an optimum design, three virtual sub-orbital planes are considered, with four deputy satellites in each.

This configuration of 13 satellites takes on a leader-follower design such that only the leader shall communicate with the ground station. A projected 5-km radius circular virtual orbit design, with the chief satellite at the center of all the deputy satellites, has been adopted. These choices have been driven by extensive optimizations that aim to minimize factors such as the size of the separation sphere of influence among adjacent satellites, orbital perturbations, and transmission power loss. The followers collect the solar power and transmit it wirelessly to the chief satellite by the transmit beamforming technique. The chief satellite collect the power beams from the follower satellites and transmits it to select ground stations located all over the world within the ground trace of this constellation. In the ground station the rectennas would collect the S-band signal for further conversion into limitless electric power in either DC or AC forms. An operational altitude of 1500 km has been chosen in order to cut down on drag-related perturbations, while also keeping the “last-mile” transmission power losses to an optimum low.

This satellite model for power generation is advantageous because an international collaboration can make viable investments into such a project, that is likely only a fraction of the overall cost of deployment and operation, and eventually reap sizeable benefits as an outcome of the novel venture. Different station-keeping techniques can further be included in this system so that the satellites maintain the formation, in the face of many orbital perturbation forces, throughout their lifetime.