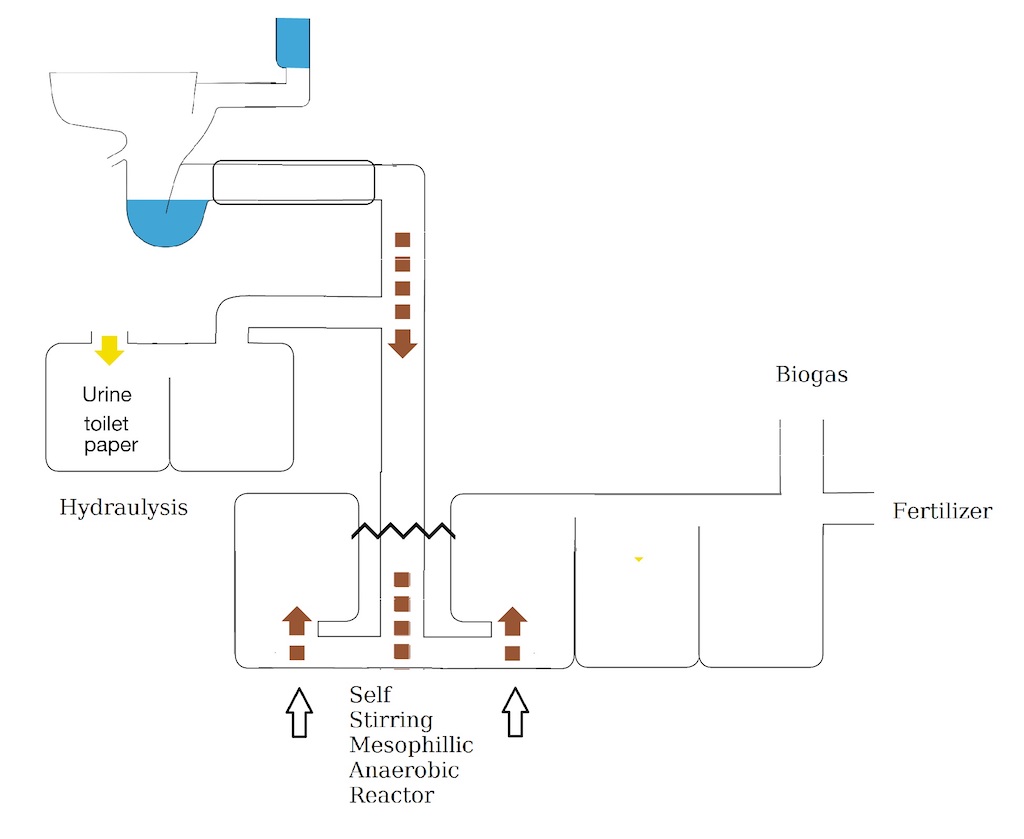 Initial design consideration calls for a manually pumped, separating flush toilet similar to a modified manual marine toilet. Subsequent iterations may be suitable for Pour-flush toilets of the seated and squat-plate types.

Operation of the flush mechanism initially pumps flush water to impart turbulent motion to feces in the toilet, further operation of the mechanism suctions the toilet contents through an static mixing chamber and Joker-valve and into the main pump body. The return stroke forces the contents of the main pump body through a second static mixing chamber and Joker-valve, then into a Self Stirring Mesophilic Anaerobic Reactor.

The Self Stirring Mesophilic Anaerobic Reactor consists of a 2-chambered vessel, of equal portions connected at the bottom in such a manner as to allow the back and forth passage of Digestate, as well as settled dense particles. The Primary chamber is sealed except for a purge valve, a passage for the admittance of toilet wastes and an autosiphon. Biogas collecting in the Primary chamber will gently push a desinged quantity of Digestate through a connecting port, into the Secondary chamber. The buildup of Biogas will activate the autosiphon at a predetermined value. The sudden transfer of Biogas from the Primary Chamber, to the Secondary Chamber causes Digestate to return to the Primary Chamber, stirring the contents and suspending settled particles for further anaerobic digestion.

The Secondary Chamber will have 3 passages, such that one allows Biogas to escape for collection at a lower pressure than that realized in the Primary Chamber, while the other sets a maximum level for the Digestate, creating Digestate flow through the rest of the system. The third passage is to allow the return of any solid particulates collected from the subsequent treatment stage.

Digestate expelled from the Self Stirring Mesophilic Anaerobic Reactor then passes through a series of separating chambers such that any remaining particulate matter is collected and returned to the Secondary chamber by gravitic motion, through the third passage.

Biogas collected from the system will initially be utilized to mantain Mesophilic Conditions within the Reactor (~95°C), for optimal operation.

Final effluent will be divided such that a portion is mixed with diverted urine and utilized to hydrolyze paper waste to help ballance the Carbon to Nitrogen ratio. Paper can be deposited via a passage with a wetted-throat design This hydrolyzed predigestate will be utilized as additional influent. Further, an additional pumped connection can be added for the admission of macerated food wastes, to further increase Biogas generation in the system.

System volumetric capacity will be designed around a suitable Hydraulic Retention Time for complete sanitary treatment, based on the expected maximum numer of people and quantities of additional wastes to be added and treated. The resulting final effluent is an organic liquid fertilizer suitable for application at various concentrations, including the potential use as Hydroponic and/or aeropinc fertilizer.. Alternatively, the effluent may be discharged in a subsurface drainfield similar to normal Septic Systems. Compliance with existing laws may require Chlorination.