Neighborhood Resilience Centers: How to Improve Response to Natural Disasters and Cyber Attacks 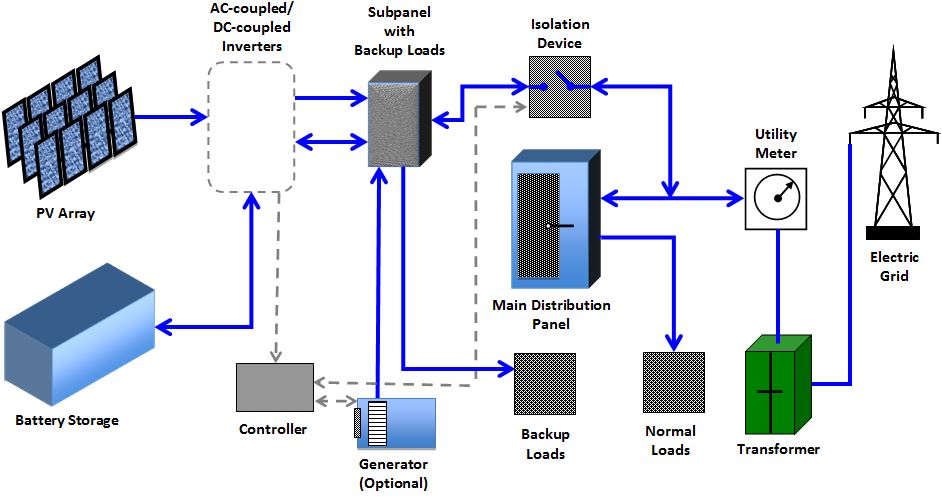 Our design idea, Neighborhood Resilience Centers (NRCs), solves the problem of access to power and communications following a disaster. Whether natural (earthquake, hurricane) or man-made (cyber or physical attacks on the electric grid), the lack of widely-available resilient energy and communication services complicates and lengthens recovery efforts, increases stress and suffering in the affected population, and contributes to loss of property and life.

NRCs are modular microgrids that combine solar energy, battery storage, and satellite communications and operate both pre- and post-disaster. During normal operations, NRCs interconnect with the electric grid, producing green energy and providing significant economic benefits for the host facility and electric utilities.

During power outages, NRCs disconnect from the grid and power critical electric loads, function as triage locations, charge batteries for medical and communication devices, enable 24/7 communications, and serve as gathering points within neighborhoods. They operate independently and continuously until the grid is restored, ensuring neighborhood energy and communication resilience.

The main benefit from NRCs is that recovery after a disaster is faster, easier, and safer. Residents are able to recharge cell phones, computers, medical and other devices, and access internet-based communications. Post-disaster PTSD will be reduced. Most importantly, lives will be saved.

NRCs are a brand new use and market for resilient energy system integration. Instead of relying on backup generators with limited fuel supplies, NRCs operate indefinitely, providing valuable resources and stability during uncertain times.

NRCs will be manufactured in a modular and mass-producible manner for standardization and cost savings. The off-the-shelf components will be factory-assembled and integrated into modules, then tested in a controlled setting.

Implementation is simplified, as modules are "plug and play" to expedite interconnection with one another, the host facility, and the electric grid. NRC production is cost effective through use of standard components, a modular design, and high-volume economies of scale.

There are no products like NRC in the marketplace today. The only related competition is diesel generators, which are inactive other than during outages, and limited by the amount of stored fuel.

Further, these generators are inefficient, polluting, and subject to fuel price volatility. By contrast, NRCs pay for themselves in lifetime and annual cost savings.
NRCs serve critical facilities such as fire, police, health care, and emergency centers, and non-critical facilities such as schools, retail, and municipal buildings. In all cases, NRCs will be installed in neighborhoods, within a short walk for large numbers of people.

NRCs are useful in all areas of the world where major disasters occur. Initially, our goal is to see NRCs built across the Pacific Northwest in urban neighborhoods to support disaster recovery for people in their own communities.

NRCs support the inexorable trend towards a more decentralized and distributed public energy system, with the further benefit of enhanced societal resilience.