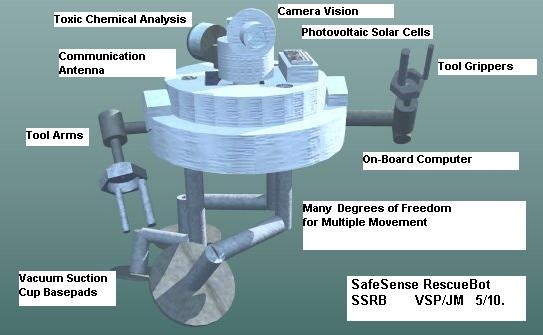 BACKGROUND: In many emergency response situations, it is often desirable to use automated devices with artificial intelligence to attempt a successful rescue and to ensure the safety and security of rescuers, victims and property. An appropriate use of robots in scenarios such as these is thought about and often essential. An innovative robot utilizing advanced technologies, electronics and microprocessors such as the robot presented here are a benefit to humans.

OBJECTIVES/HYPOTHESIS: The objective of the SafeSense RescueBot concept and design is to enhance the capabilities of rescue personnel’s safety and security as well as enhancing the timely and successful rescue of victims in unfortunate circumstances. The hypothesis is that although many robotic devices are manufactured now and employed, the SafeSense RescueBot presented here takes the “Swiss Army Knife” approach in function ability.

STUDY DESIGN: The study design shows the many functional components of the SafeSense RescueBot. Employing the use of the latest cutting edge technologies to render a robot that will prove to be marketable, cost effective, as well as functional in performance and also user friendly for rescuers in environments that require a multitude of capabilities to perform analysis and safe rescues.

RELEVANCE: The use of the SafeSense RescueBot in hazardous situation that prove to be dangerous or impossible for humans is essential for the safety and security of rescuers. These situations could include but are not limited to: chemical spills, extreme heat and sensing toxic gasses. The SafeSense RescueBot employs the concept of a vertical climbing robot through the use of a vacuum system of suction that is computer controlled for vertical ascends and descends.
It employs the capabilities of first analyzing the rescue situation and then communicating with the team at the Command Control center so rescuer personnel are able to analyze and then perform the required tasks to achieve a successful rescue.