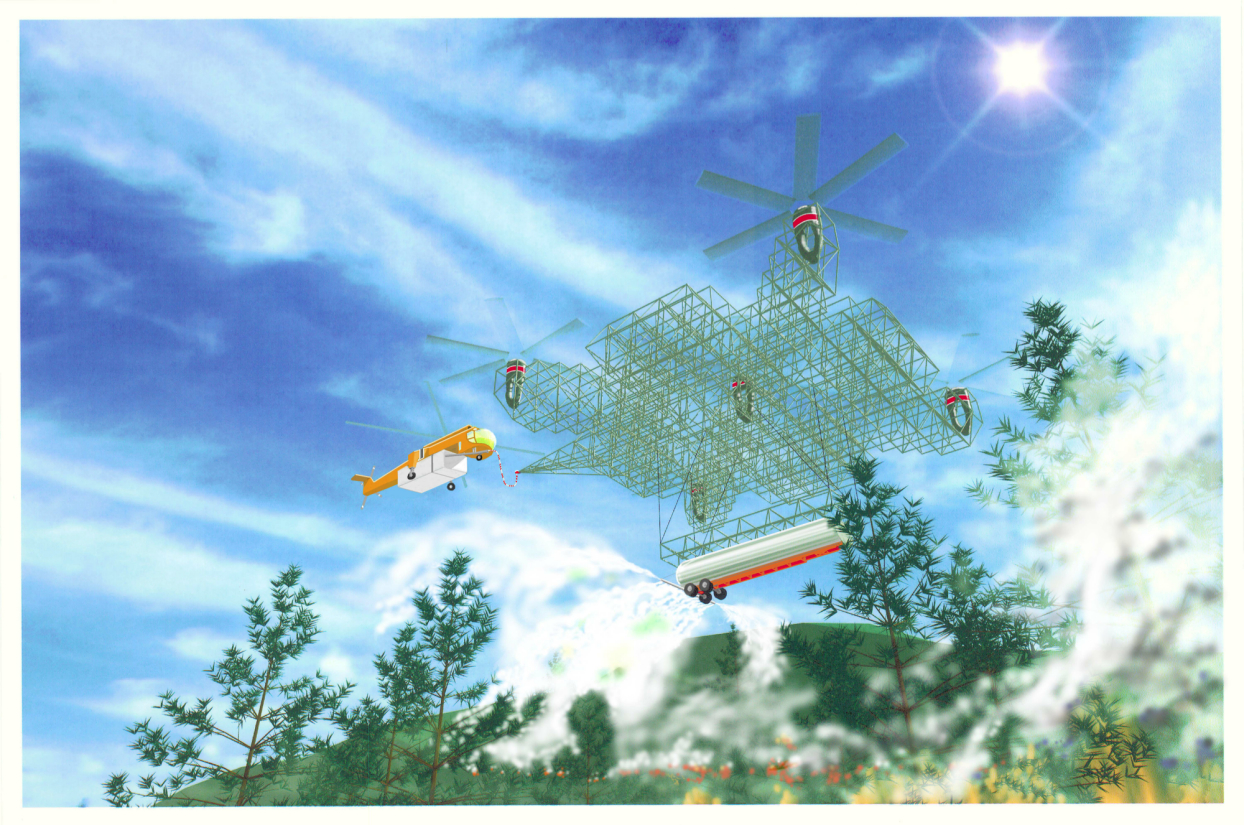 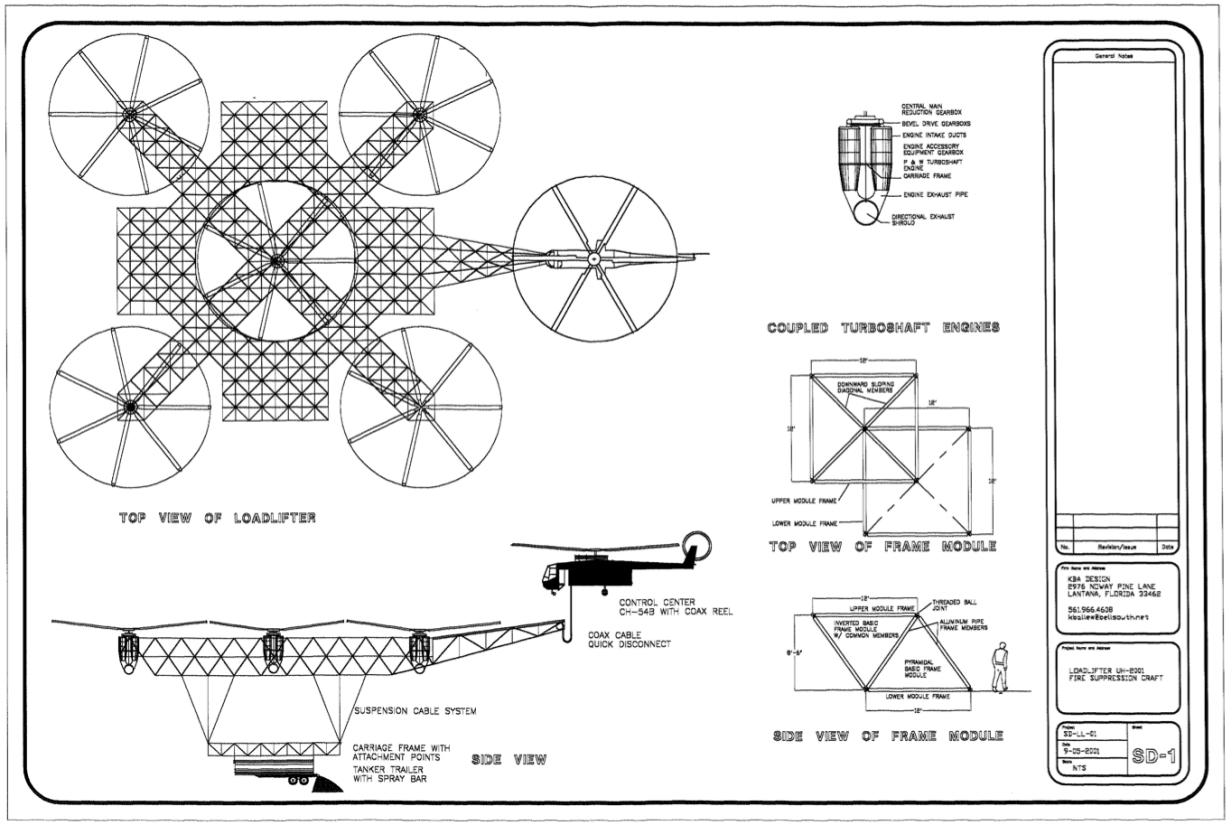 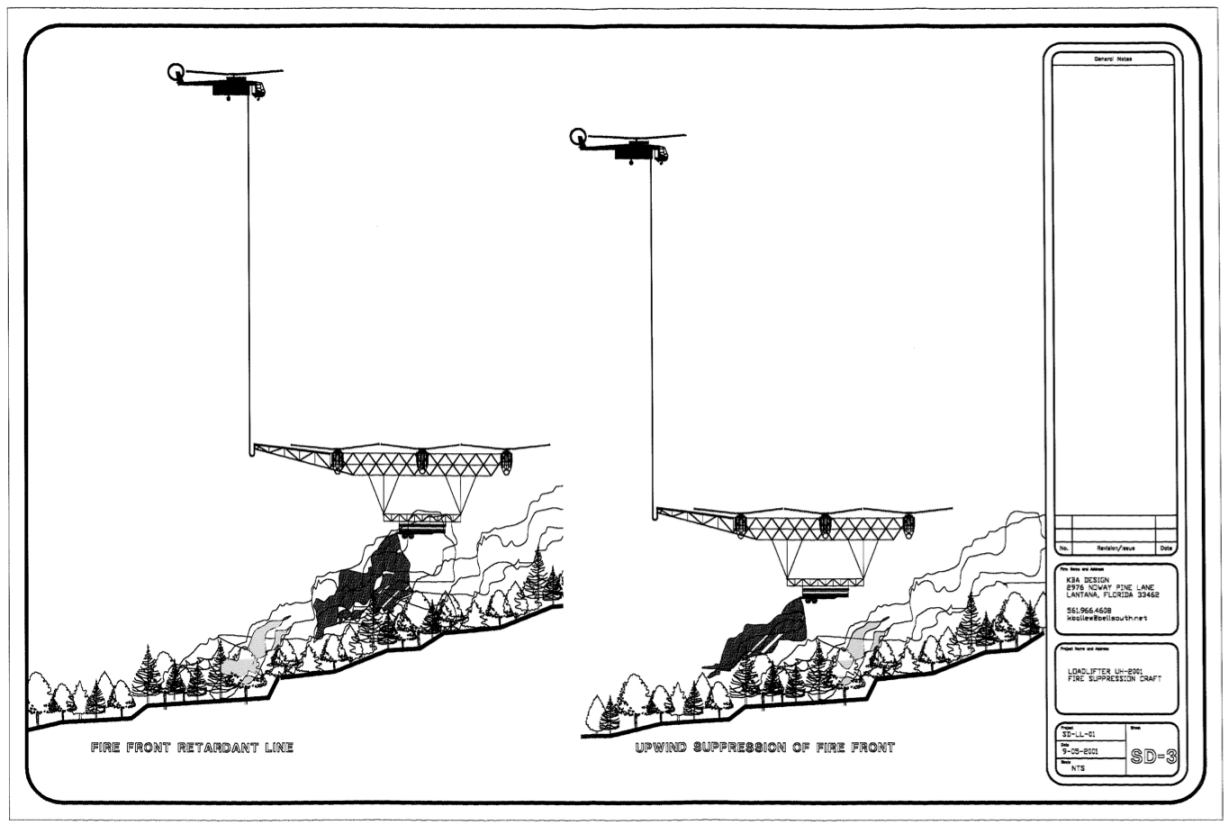 This concept represents, in terms of probable deterred economic loses, a beneficial design development undertaking. U.S.F.A. states that between 1997 and 2006, 58.5 million acres of wildland was lost to fire at a cost of hundreds of lives and billions of dollars in economic value.

The objective of the design of the Remotely Controlled Loadlifter UH 2010 is an increase in tonnage of retardants delivered from pre-stationed tanker/trailers or other structurally framed bladder containers. Other benefits of the design fall into the utilization of downdraft of the lower assembly to maneuver low intensity, wind driven scrub fires.

The concept combines two flying platforms, one an occupied command center and fuel reserves and a second, unoccupied and tethered lower structural space frame with multiple rotor assemblies lifting the payload of retardants. The higher craft is assumed to be a craft similar to the Sikorsky S-64, Skycrane, now the Erickson Skycrane of Oregon, carrying a fuel supply for the lower unit. Fuel supply lines and electronic control cabling would be tethered to the lower unit with emergency disconnects. Redundant radio back-up controls would maintain control of the lower unit.

The geometry of the space frame is designed to be modular allowing it to be broken down and transported by tractor trailers between missions. The powerplants and rotor systems would be individual modules fitting into the space frame and replaceable with back-up powerplant/rotor units.

The design estimated lifting capacity is in a range of 43,000-53,000 lbs. with substantial safety factors.

The RC Loadlifter UH 2010 is a scaled up lifting assembly that could provide a broadened strategy in controlling wildland, suburban and urban fire events. The concept utilizes larger containers of retardants that can be trucked into position to systematically suppress an advancing fire. Being basically a helicopter and multi-rotor assembly, airports are not necessary thereby decreasing the time between applications of retardants.

A particularly interesting aspect of this concept is the fact that it utilizes a number of proven elements and components. The Sikorsky S-64 Skycrane has been a successful utility helicopter for years and is configured appropriately for the mission control center and fuel source. There are many powerplants and rotor systems available for use on the modular lifting platform and the engineering for space frames is now a known process utilizing finite element method analysis.

One design for the Modular Loadlifter is shown here. The modular units can be formed into many different shapes and sizes for specific uses.

The methods of controlling moving wildfires utilize coordinated ground and air control and suppression. Planning includes assessment, prediction and interdiction with the resources available. The essential problem has been a matter of quantity of resources once the fire event is expanded in area or intensity. The need grows for more retardants delivered accurately in the shortest amount of time. The RC Loadlifter UH-2001 is one achievable method of answering this need.