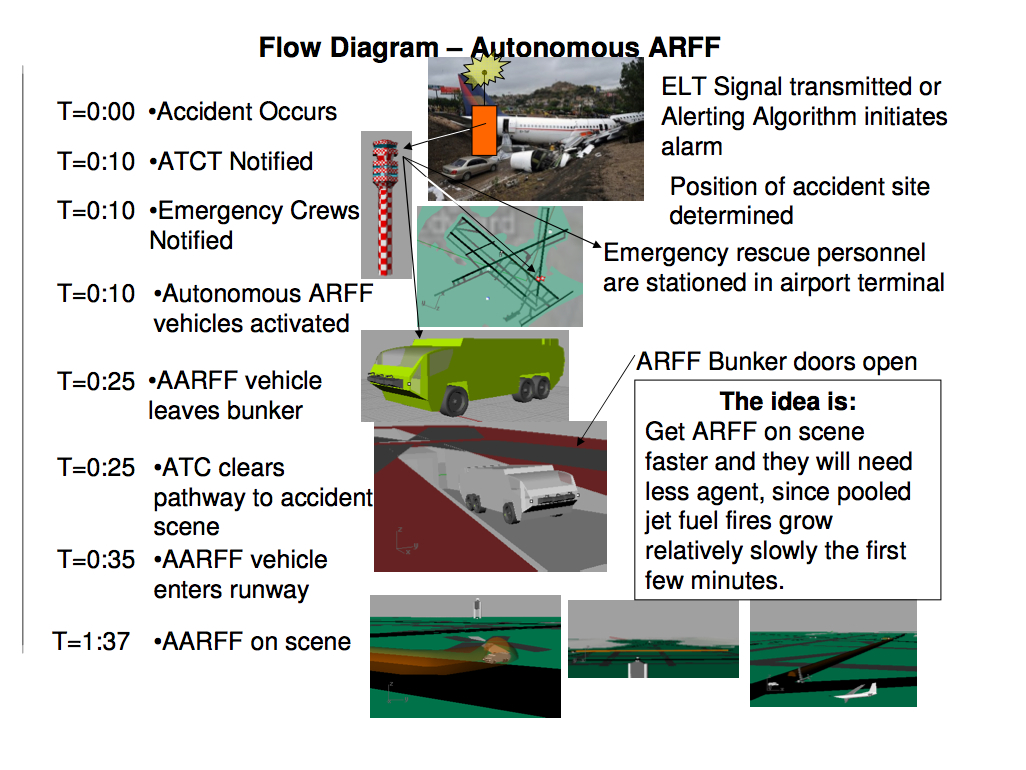 • What problem does your design idea solve?
This design reduces the response time to an airplane accident by the airport’s ARFF vehicles. Reducing response time is the best way to improve the ability to quickly extinguish a postcrash fire.
• What are the potential benefits?
There are two big benefits from this design: first, reducing the ARFF response time should result in saving lives in the event of an air carrier accident on the airport. Secondly, automating this initial response maneuver would redirect rescue personnel needs for the airports and allow them to be repositioned in duties nearer to the everyday functions, within the terminal, thus improving their response times to events involving individuals in the terminal, which happen far more often than aircraft accidents.
• How is your idea novel or an improvement on what is currently available in the marketplace?
The current ARFF operating model places the fire stations at locations above ground on the airport that are often challenging for making fast responses to accident sites. This design would locate an ARFF bunker adjacent to each major runway, so that the first responding vehicle could make a simple approach to the accident scene. The other ARFF vehicles would make programmed automated approaches to follow up to the first vehicle. All of this would also be augmented by responses by real live emergency responders from within the terminal area who would have access to response vehicles stationed on the aircraft side of the terminal.
• Where would this idea be applied?
Airports serving air carrier operations.
• What is the market potential?
The market potential for this concept is the major air carrier airports in the world. The 35 largest airports in the U.S. handle over 97% of the passenger movements each day. All airports with air carrier service could benefit.
• How does your design work?
When an airplane accident occurred, this design would alert the air traffic controllers, emergency personnel stationed and initiate an automated process to open the doors of a below grade bunker housing an ARFF vehicle, and deploy the vehicle.
• How would your product be manufactured?
There are a number of commercial ARFF manufacturers that may be willing to develop a vehicle with this capability. Airport designers would be engaged to develop ARFF bunkers that satisfy the design requirements of a below-grade facility adjacent to the runways.
• How would the production cost compare with products already in the marketplace?
There would be an initial cost for R&D and an increased cost of production for ARFF vehicles, to accommodate an autopilot system. These costs would be more than recovered in the event of an accident on the airport that was more rapidly brought under control by engaging such a rapid ARFF response.