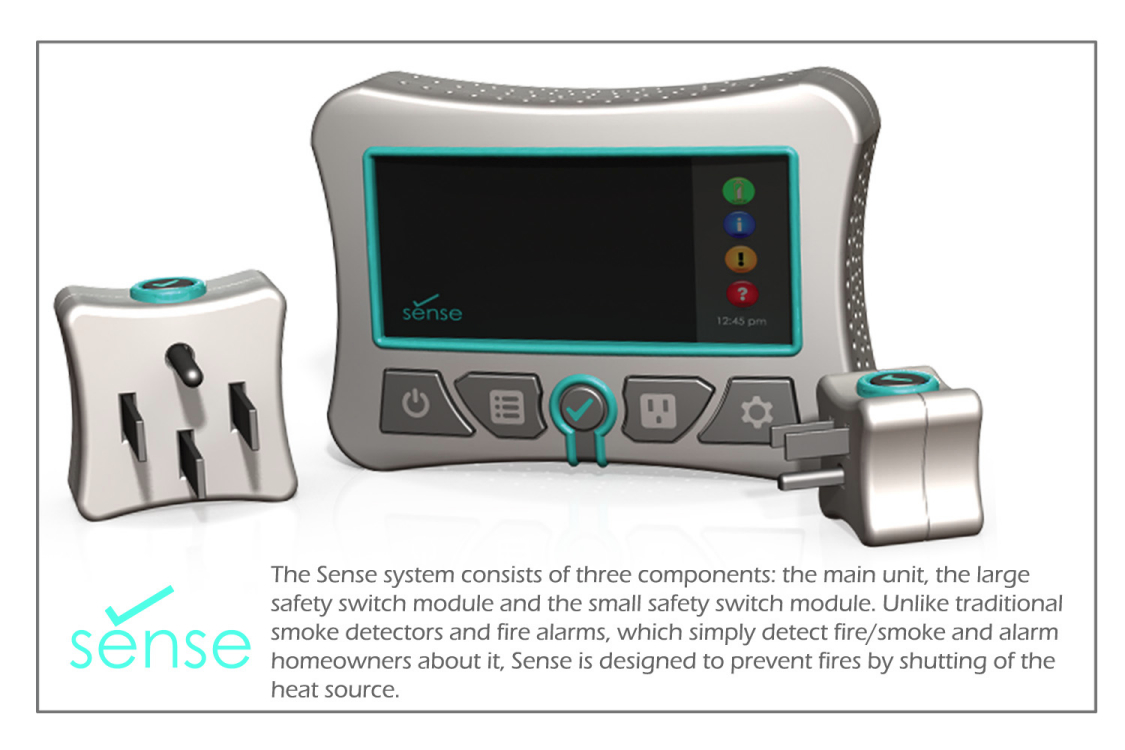 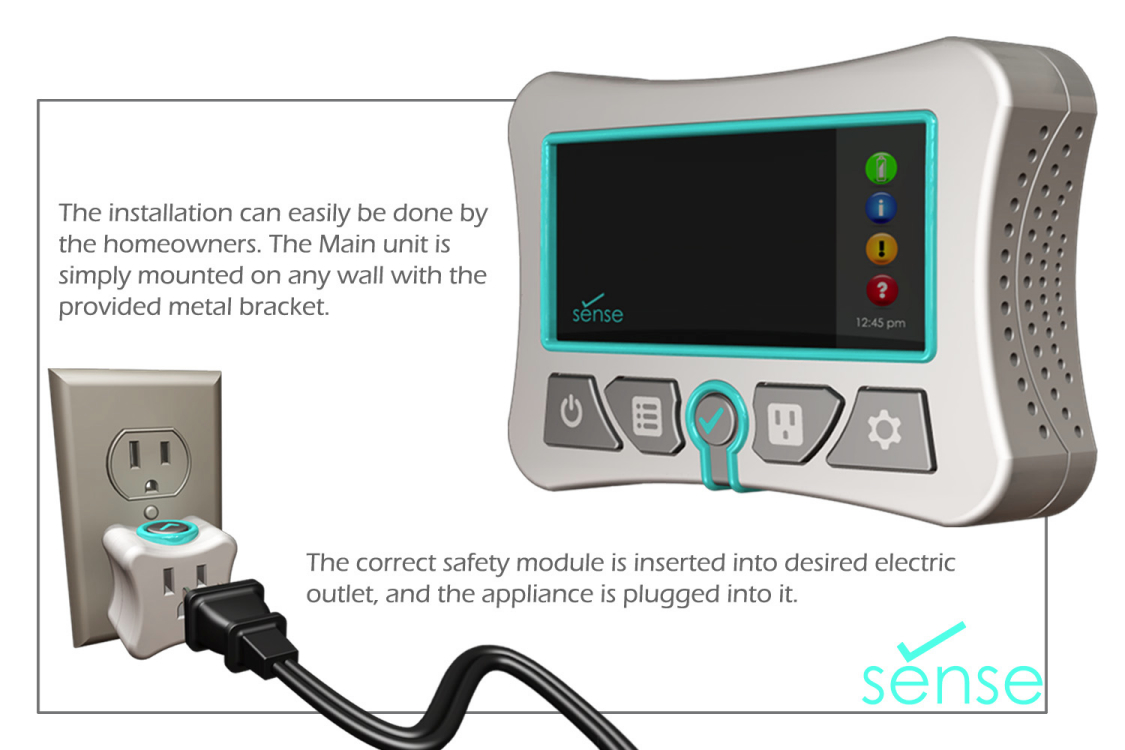 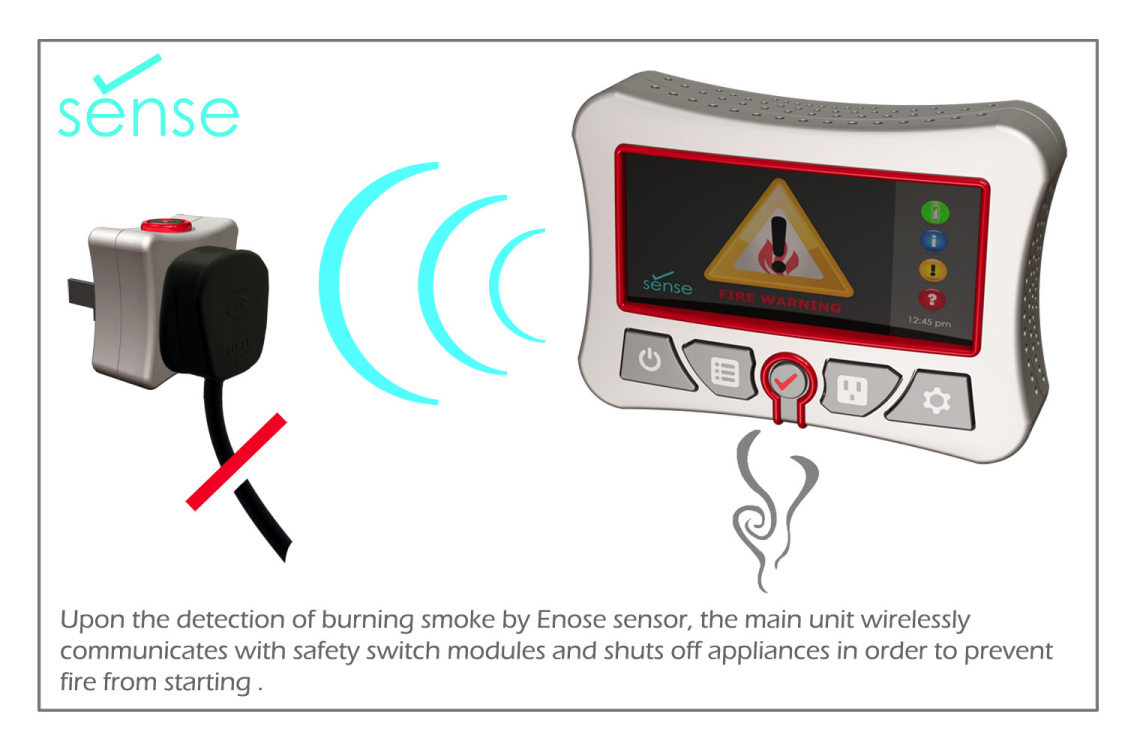 The Sense System revolutionizes residential fire prevention. Unlike traditional smoke detectors/fire alarms, which only alert user about fire/smoke, Sense helps prevent kitchen fires before they start. It can also be directly installed in the kitchen, which is the number one place where residential fires start. Sense system consists of the main unit and the large and small safety switch modules; the system can easily be installed by the users. The main unit houses an Enose sensor and can be simply mounted on any wall. Enose is an existing technology, which is able to distinguish and analyze smells similarly to human nose. Enose enables the unit to distinguish cooking steam/smoke from fire smoke, which will decrease false alarm. Therefore, the system can be directly installed in kitchens, which decreases the detection time of any hazards. Traditional smoke detectors cannot be installed in a kitchen due to the high incidents of false alarms. The safety switch modules of the Sense system are designed to shut off cooking equipment when fire hazard is detected. The modules host wireless receiver and an on/off switch. They are installed between the cooking equipment and the electric outlet. The module is inserted into desired electric outlet, and the appliance is plugged into the safety switch module. The large safety switch module is designed for electric stoves. The smaller unit is designed for other cooking equipments such as toasters and microwaves. The system alarms users if smoke or other toxic gases are detected and provides information about the nature of the hazard on its screen. The sound of the alarm can be customized for different levels of hazards and the alarm can be silenced. If system detects burning food, the main unit alerts the user and if no feedback is received within 60 sec. it shuts off appliances in order to prevent fire from starting. If a fire smoke is detected the system shuts off the appliances without delay. The shut off of the heat source is achieved through a wireless communication between main unit and safety switch modules. The modules can be turned back on by the users via the main unit, so there is no need to access the safety modules after the installation.
The Sense fire prevention system is designed for any user; however, it is especially beneficial to elderly population and those with memory loss. Research has reviled that number one reason of residential fires are unattended cooking (i.e. people leave food cooking on the range and then forget about it). With Sense, as soon as food starts burning, the heat source is shut off. Although the system will cost more than the traditional fire/smoke detectors, it offers many added benefits. Aside from alarming users about hazards, it prevents fires without creating nuisance and interfering with the cooking process. Sense can be sold at any home appliance, home hardware, and electronic stores.