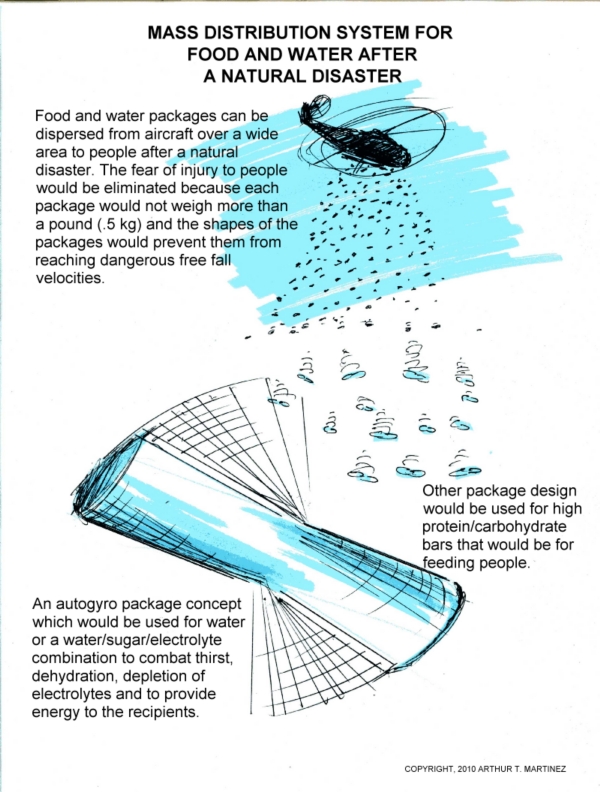 The Problem
The problem is the length of time that it takes to distribute food and water after a natural disaster. This design solves the problem of the “point source method of food distribution” that I saw after the Haiti earthquake disaster. Point source distribution was eventually used in Port-au-Prince but because of damaged roads it could not be used to access rural areas until many days later.

The Solution
Small food or water packages that can be air dropped are the immediate solution to above problem. Small personal sized packages allows food and water to be distributed “pinata style” by aircraft over rural areas within 2 or 3 days after a natural disaster occurs whether it be an earthquake, flood or tsunami. The size and form of the package would designed to allow it to be dropped without fear of injuring people on impact.

The Improvement
The “pinata style” of air dropping food and water could be done within days of the disaster. Existing methods of food distribution currently being used by first world countries depend on logistical infrastructures such as roads, bridges and personnel to exist on the ground. In most cases these logistical infrastures structures are badly damaged or don't exist immediately after a natural disaster in either urban or rural areas.

The Market Potential
There is virtually no Market for this approach in most areas during normal conditions, however the need for food and water always arises after any large scale disasters.

How It Works
Food and water are placed into small packages that have a form factor that allows them to glide or sail down instead of plummeting from elevations of 500' to 1,000' at a terminal velocity that might injure people. The goal would be to achieve a terminal velocity equivalent to dropping an 8 ounce package from 20' to 30' above the ground.

How It's Manufactured
Existing food packaging equipment would be redesigned to meet the needs of new package shapes. Additionally, the equipment would be mobile so that it could be moved to a ship or country near the site of the disaster. This would allow the bulk packages of food and water to be moved economically to the equipment site and thereby reduce the long range transportions costs.

Although prepackaged products could be held in storage, the preferred idea is that the food and water are packaged immediately after a disaster to insure a higher degree of freshness and sterility. However if food is constantly being distributed apart from natural disasters, then it's quite possible that this type of package could become part of that food distribution chain.

Production Costs
It's difficult to compare production costs since there currently are no products that fill this market.