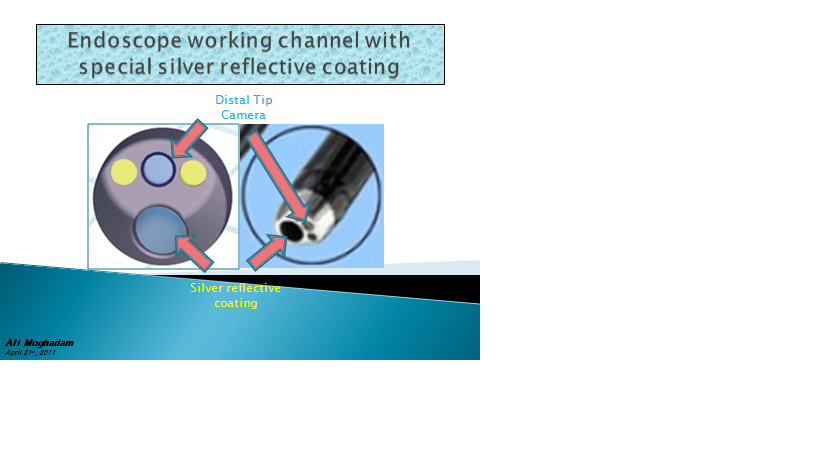 Idea:
The idea is to have an endoscope with protected working channel, which is intended to prevent inadvertent damages from Holmium laser fibers to the distal end of flexible Videoscope or Fiberscope during surgery. This system would significantly reduces the occurrence of costly repairs by applying a thin coat of reflective material (such as mirror silver coating) to the interior wall of working channel of insertion tube. Since the laser has same property as light, if Holmium laser is accidently pulled back (while the distal end of laser fiber inside working channel) the light bounces back rather than cutting through the working channel.

Problem:
Despite the obvious utility of the Holmium laser, laser fibers frequently damage flexible endoscope components, such as the working channel, flexible component cable system, and fiber optical systems during routine endoscopy procedures, for instance ureteroscopic. As such, I am proposing the use of a reflective silver coating inside a flexible biopsy channel on endoscope (IE such as ureteroscope) and its ability to protect ureteroscopes from laser fiber damage.

Laser energy that normally produces a tiny puncture to the wall of the working channel of an endoscope when it is in adversely fired while the distal end of fiber is still inside the biopsy channel (the tip of the laser must be out of the distal head prior to firing of laser, otherwise it would cause significant damage to the scope flexible insertion tube and component inside such image bundle or electrical wires that would result in malfunction of the endoscope). One of the most profound negative effects is the invasion of bodily fluid inside the endoscope as result of puncture damage. Thus the most important risk factor is relentless cross contamination and proliferation of diseases to other patients, other concerns are as follows:

1. Patient safety (no risk of injury to patient since immature firing of laser fibers cannot be controlled)
2. Equipment down time
3. High cost of repair

Conclusion:
One of the most important benefits is considerable reduction in patient incident cases, other benefits are reduction of health care cost and patient throughput.