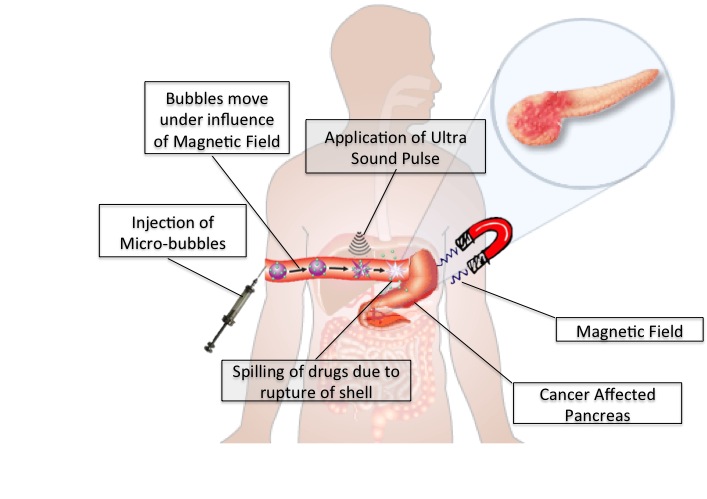 Cancer is a group of diseases characterized by uncontrolled growth and spread of abnormal cells. If the spread is not controlled, it can result in death. Worldwide, one out of eight deaths is due to cancer; cancer causes more deaths than AIDS, tuberculosis, and malaria combined. When countries are grouped according to economic development, cancer is the leading cause of death in developed countries and the second leading cause of death in developing countries. By 2030, the global burden is expected to grow to 21.4 million new cancer cases and 13.2 million cancer deaths simply due to the growth and aging of the population, as well as reductions in childhood mortality and deaths from infectious diseases in developing countries.(Source: American Cancer Society. Global Cancer Facts & Figures 2nd Edition)

Micro-bubbles can serve as targeted drug delivery vehicle capable of ferrying chemotherapeutic agents or therapeutic genes into malignant cells while sparing healthy cells, which would greatly reduce or eliminate the unwanted side effects that accompany many current cancer therapies. Recent advances in cancer research have been able to develop some nanoscale lipid-based vehicles but with some drawbacks. They are liposomes, micelles, and polymersomes.

Liposomes are self-assembling, spherical, closed colloidal structures composed of lipid bilayers that surround a central aqueous space. Several types of anticancer drugs have been developed as lipid-based systems by using a variety of preparation methods. These lipid-based vehicles have been used primarily for increasing the solubility of hydrophobic chemotherapeutics and for limiting drug toxicity. However, several problems exist with these traditional vehicles, including nonspecific uptake by the RES, rapid clearance, and instability, all of which have limited the therapeutic potential of these vehicles.

To compensate for these drawbacks a new design with same fundamental principle is formation of micro-bubbles. These micro-bubbles are incorporated not only with anti-cancer drugs but also with magnetic nanoparticles. They are injected intravenously into the systemic circulation. So if a magnetic field is applied at the targeted area, we can concentrate the micro-bubbles to that area. Now we can use the main advantage of micro-bubbles. We can shatter the shells of the micro-bubbles by means of a focused, high-energy ultrasound pulse. Ultrasound waves are directed on the area of interest. The micro-bubbles compressible gas cores oscillate in response to the high frequency sonic energy field and the shell is destroyed. Once the shells are destroyed, the contents of the micro-bubbles spill into the surrounding area and the drugs reach the affected area directly instead of going through the whole bloodstream.