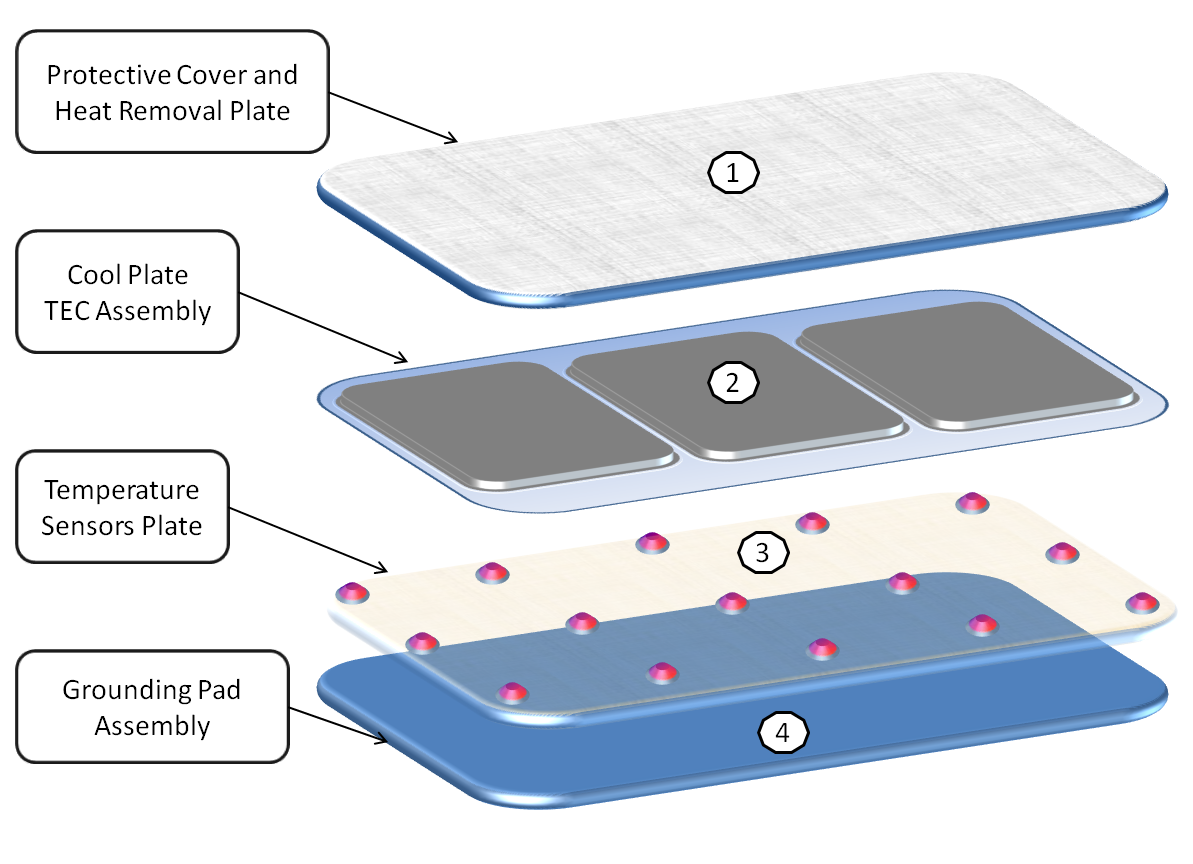 Abstract:
The high power electrosurgical and radio frequency ablation devices that apply high level of RF current to the patient for extended period of time can increase the risk of patient skin burns at the grounding pad’s attachment site. A grounding pad must not heat the patient’s skin in excess of 6 degree centigrade during the tissue ablation or electrosurgical procedure according to AAMI HF-18 standard. The RF current return is usually concentrated around the edges of grounding pad (edge effect) causing excessive heating at the highest current densities. Second or third-degree patient burns from grounding pads are not uncommon, the novel method and technology described here will ultimately eliminate the grounding pad’s skin burn complication at any RF power level and will work with existing RF generators and grounding pads in the market.

Solution:
The conceptual design of the “Cool Grounding Pad” is based on the thermoelectric cooling (TEC) effect of the solid-state Peltier device which transfers heat from one side of the device to the other. A matrix of temperature sensors such as thermocouples are equally spaced and embedded into the grounding pad or assembled on a separate thin plate (3). Also, a matrix of appropriate size TEC assembled on a separate plate “cool plate” (2) and are covered by a protective and heat removal plate (1). Items 1-3 are sandwiched and attached to the grounding pad (4) as shown in Figure-1.

Controlling Mechanism:
A temperature controlling mechanism with an algorithm such as PID (Proportional Integral Derivative) can control and regulate the grounding pad’s surface temperature precisely within AAMI HF-18 standard. The modular design of the controlling system can be integrated into the new RF generator design or can operate as standalone system working with existing RF generators in the market. The controller can support up to 4 grounding pads simultaneously and monitors the grounding contact quality as well. Figure 2 depicts an assembled “Cool Grounding Pad” and figure 3, a basic conceptual design of the controller mechanism with a delta temperature setting from 0 to 6 degree centigrade.

+ Works with existing RF generators and electrosurgical units in the market

+ Works with existing grounding pads already in the market

+ Modularity and flexible programmability allows for many possible scenarios

+ Easy to manufacture and setup

+ Communicate with the RF generator through serial or I2C port, e.g. emergency shut-down of the generator because of malfunction, open ground or excessive pad’s temperature