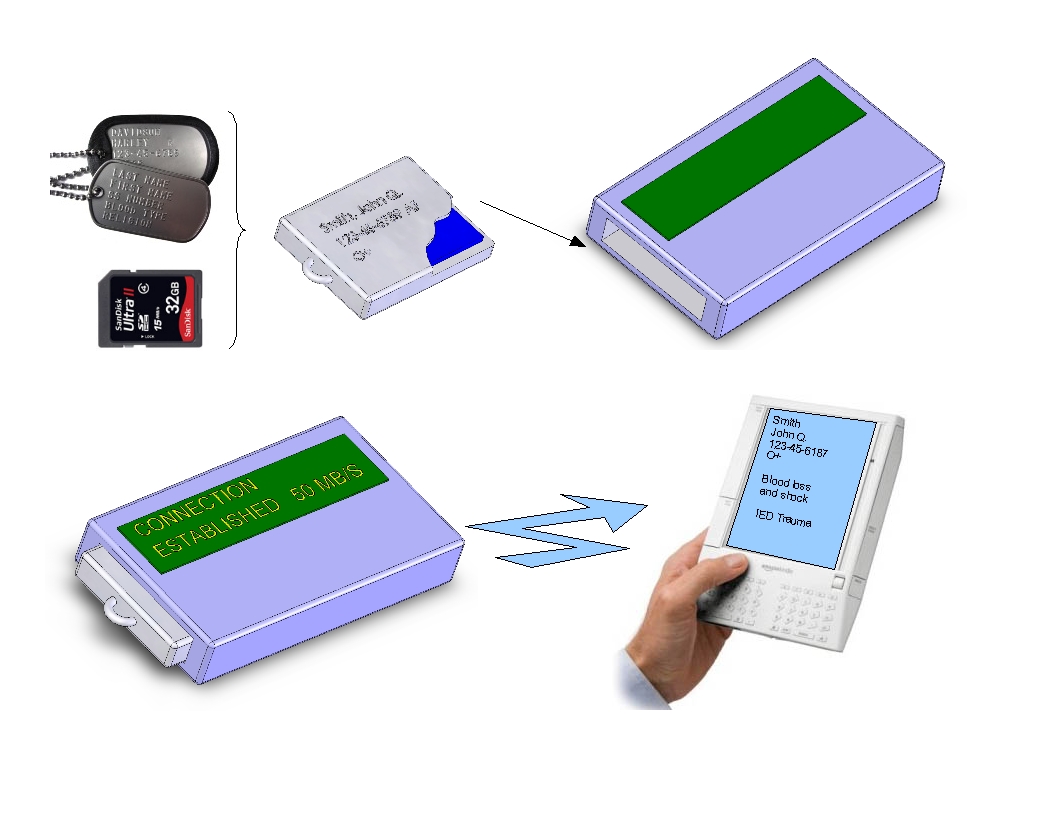 The process of rapid medical evacuation requires that medical information be reliably transferred from station to station with the injured warfighter. This proposal puts forth a concept that will allow for accurate, secure, and reliable transfer of this medical information.

In place of the standard military id tag, each warfighter will be issued a WARD tag – warfighter advanced recording device. This device will be similar in shape to and worn around the neck like the standard military id tag now in use. Each WARD tag will be embossed with the information stamped on the current standard issue id tag, and it will enclose and protect a solid state memory device that will contain the warfighter's detailed medical history. This memory device will be passive and as such will not require a power source.

The second part of the system is active and would become a standard component of a field medic's equipment kit. This device would allow the medic to connect to the WARD and scan the injured warfighter's medical history. The medic could then input information about the nature of the injuries and details of treatment. The device would allow for verbal input from the medic but would transcribe the audio comments into a formatted text file.

A possible manifestation of the system may take the following form.

All warfighters are equipped with a WARD tag that contains their medical history. The WARD tag device is sealed in a reinforced enclosure such that the memory device contacts are covered with a protective seal.

All medical personnel will carry as part of their standard equipment a powered device that will interact with the memory equipped WARD tag. This device will be comprised of two distinct elements.

The first element will be a detachable card reader/writer that the medic will use to interface with the WARD. The process of inserting the WARD tag into the reader device will activate a mechanism that will breech the outer cover and make electrical contact with the memory card. The reader/writer device will then use a communication protocol like Bluetooth to establish a data link with the second element.

The second element will be worn or carried by the attending medic. This device may be distributed: a rugged bluetooth enabled hand held computer like the Trimble Nomad that contains the required software, provides the processing power, and has a screen that will display the information contained on the WARD tag, a wearable microphone and camera that allows the medic to verbally record notes on treatment. These verbal notes are converted to text in real time by the CPU and transmitted along with the raw audio file and and any images or video to the WARD tag.

When the medic completes medical treatment, he removes the card reader/writer from the WARD tag. As the reader is removed it automatically places a temporary protective seal on the tag to protect it during the subsequent stages of medical evacuation.