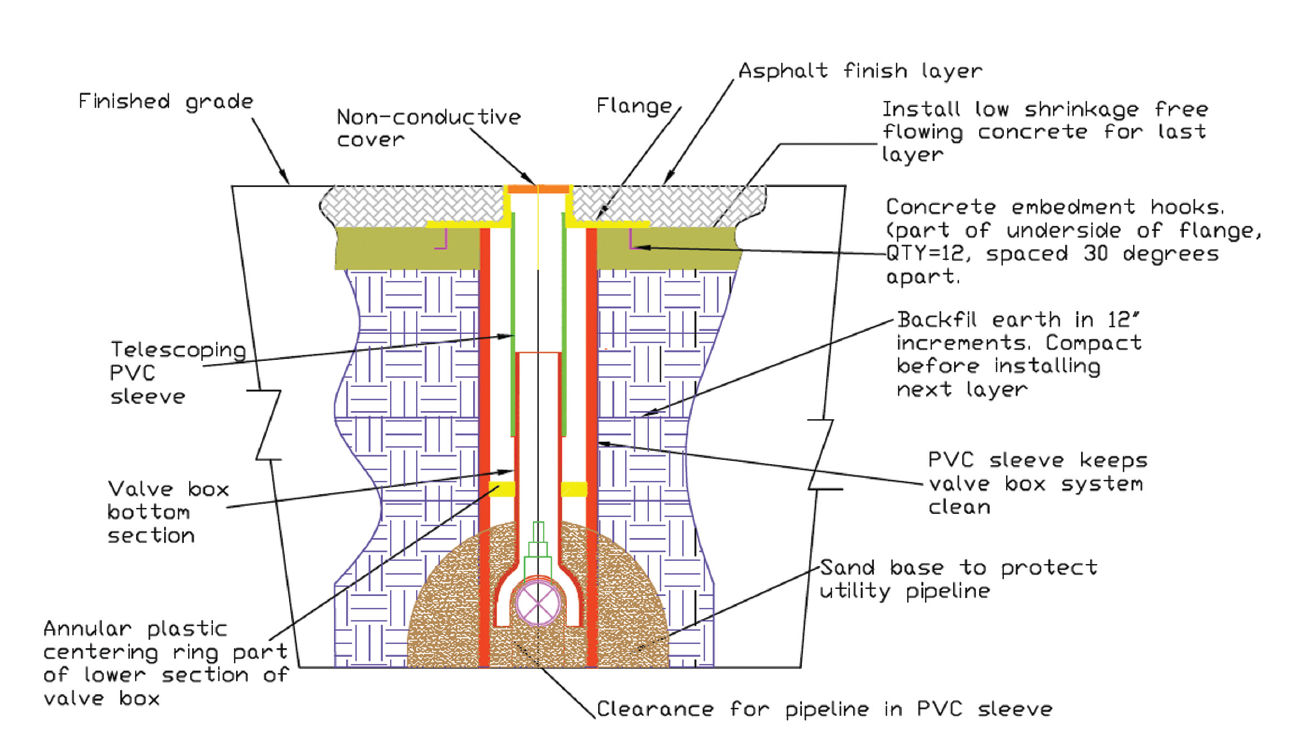 Valve boxes and covers, as currently used, are a cost center and allow for security and safety vulnerabilities. The purposes of the invention are to increase highway safety and to extend the useful life of a pavement by eliminating pavement settlement and the development of potholes at the site of the valve cover (due to the flexing of the pavement/earth and the current rigid design).

As of right now, a terrorist can ignite a gas line through an unsecured cover near a crowded area, which happens in other countries.

In the case of other emergencies, such as a natural disaster or contractor damage, when it may be desired to shut down a particular utility line rapidly, the appropriate valve covers may not be readily located and identified, particularly when the valve cover has settled and has been covered with dirt or pavement or is obliterated by snow, flooding, mud, etc. Often, covers are missing or not seated properly, allowing debris to collect in the area of the valve, making it difficult to rapidly turn it off.

Authorized personnel will be able to easily locate specific valves, when needed, and have them free of debris when the valves need to be closed. Utility lines run beneath roadways throughout the nation. The control valves for these lines are often placed such that the valve covers are installed in the pavement, and the disruption in pavement integrity caused by the presence of a valve cover frequently leads to a rapid deterioration in pavement quality, the development of potholes, and increased maintenance costs.

It is estimated that a valve cover system will cost will be readily recovered through the decreased need for roadway maintenance and a reduction in natural gas incidents involving ignition.

The potential impacts of the proposed valve cover system:

1. Cost: It will lead to a decrease in the costs of highway maintenance that are incurred with the present system of valve covers

2. Safety/Security: The locking mechanism may prevent someone from tampering with a gas valve. Example: terrorist igniting/exploding a gas line (through an unsecured cover) near a crowded area, or filling the valve box with quick-drying cement that prevents valve access

3. Safety/Conservation: The readily locatable nature of the valve cover will promote safety as well as conserve energy by reducing the loss of natural gas, particularly in the case of an emergency

4. Safety: It will lead to an increase in highway safety through the elimination of valve-associated potholes and pavement degradation

Based on gas industry data, it is estimated that one million natural gas distribution valves exist in the nation's pipeline infrastructure. A sizable number also can be found in the nation's water distribution system. Virtually all of these buried valves, plus critical service valves feeding military facilities, hospitals, schools, etc. would benefit from Smart Valve Box and Cover retrofits. In addition, approximately 100,000 new and replacement valves are installed annually where this device would make economic sense.