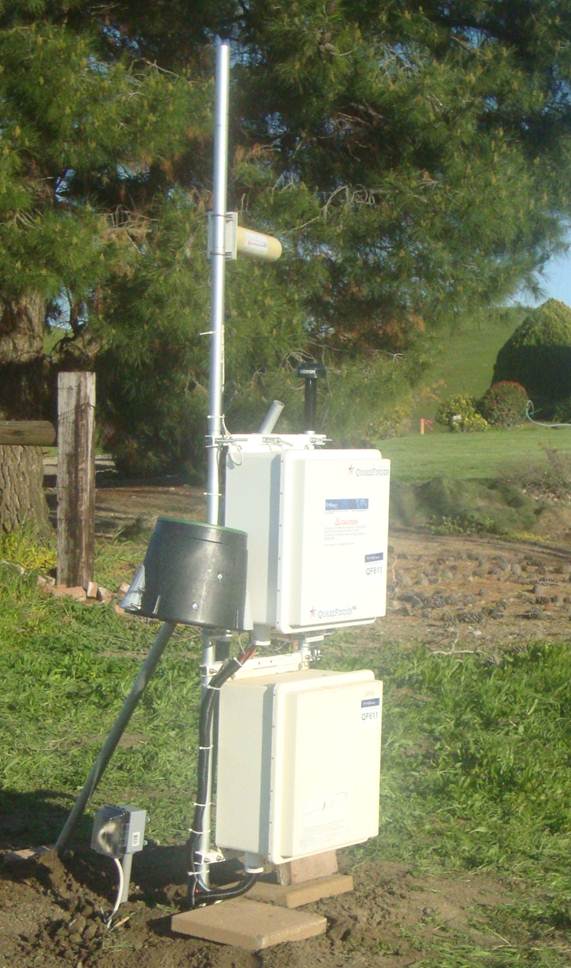 Earthquakes kill. Existing methods of forecasting or predicting earthquakes are very long-term (years) and very inaccurate or very short term (seconds). If we had warning that a major quake was likely within days or weeks we could take action to prepare and reduce their risk of injury or death.

Rocks under extreme pressure produce electromagnetic effects that can be measured. Deploying a network of sensors along major fault lines will allow detection and analysis of these signals as input to an earthquake alert system. The value of such a system would be extremely high to emergency preparedness and response agencies, as well as governments, businesses, and individuals – in exactly the same way that forecasting of hurricanes, tornadoes, and floods has become vital.
Our design consists of a network of instrument packages placed about 20 miles apart near active seismic faults. Each package includes three magnetometers, air ionization, temperature and humidity sensors and a geophone. Data from the sensors is sent to a data center via satellite or cellular radio. The data are analyzed to remove noise and detect earthquake signatures. When clear indications of an impending earthquake are confirmed, authorities are notified to prepare an alert.

The theory behind this system has been confirmed in laboratory and field experiments, and the results have been published in peer-reviewed journals. Motivated by the search for the origins of life, researchers used a large industrial press to compress small rocks, and nearby instruments recorded changes in air ionization. This result was confirmed at much larger scale outdoors under un-controlled conditions. A seven-ton boulder was split by injecting expanding concrete into drilled holes. Nearby instruments recorded results very similar to those from the laboratory experiments, and those recorded before and during earthquakes.

There is currently no operational system anything like the one proposed. The market opportunities are not clear. Systems for forecasting weather are similar in nature, consisting of many geographically dispersed sensors and large data processing centers. They are operated by government agencies around the world, which share data globally to maximize accuracy and value. It is likely that our proposed system will evolve to become part of a global earthquake monitoring and alert system that would combine observation of several electromagnetic effects both on the ground and from space with integrated analysis of many data sets. This effort is ultimately beyond the scope of an individual corporate entity.

There was a time when weather forecasting was thought to be impossible. And there will come a time when earthquake forecasting is commonplace. When this happens, the quality of life for those living in earthquake-prone areas will improve considerably as their become confident of receiving adequate warning that will allow them to stock up on supplies, avoid risky places, or leave the area temporarily. Emergency responders will know in advance where to position equipment and supplies, greatly simplifying and reducing reaction cost. The combination of individual and institutional preparedness will dramatically reduce the loss of life from major earthquakes.