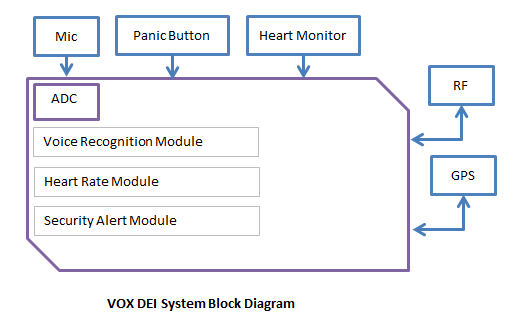 It becomes a graver problem many times for the elderly that they may suffer a heart attack while walking or doing any physically strenuous work. The age they attain normally leaves them incapable of coping with their surroundings. In many countries, during festivals like New Year’s Day, even lighting firecrackers jeopardizes their bodily conditions. In such a case, if they do not get quick access to a medical facility, then it may be even possibly result in death.

Our device, Voice Operated Distance Emergency Informer (abbreviated as VOX-DEI) almost completely guarantee a total removal of problem, in brief we can prevent casualties. The basic VOX-DEI system consists of six main components. Four of them are the circuits for smooth functioning of the device. They are the voice detection circuit, the GPS module, the RF or Bluetooth devices, the RF receiver or mobile device. The other two are the hardware devices namely the Panic button and the Alarm controlled by the user. The device can also be made to operate these.

The basic functioning of Vox-Dei revolves around the heartbeats/hand pulses of a person which is given a top priority. The device is incorporated in a belt to be worn around the chest. In case of measuring pulses, it can be worn like a wrist watch too. Whenever Vox-Dei detects any unusual changes in pulse pattern for certain duration of time, say 10-15 seconds continuously, it sends an alarm signal in the form of an SMS to the nearby police station, thereby alerting people of the situation. It can then be ensured that the person goes quickly to a medical facility through the police.

The device would also help in case of an elderly person being robbed by a thief. In such a condition when that person will scream, his voice will be picked up by the voice detector circuit also connected in the belt. Hence it is implied that the pulse sensor and voice detection circuit are connected in parallel to the GPS module. The alarming device will have a built-in radio frequency device to help increase its communication capability.

A nearby variant of this type is the bank security alarm. However it has to be operated with hand to be activated and that too cannot be worn. Vox-Dei being activated either by heart beats or voice or pulses will be a better concept than the existing ones. In the market basically such devices are not available as of now. Even if they are, then they have to be specially made. The mass production is still not seen in this area. So seeing a commercial aspect, Vox-Dei will be a better concept from a business point of view too. The components required in it are the general ones nowadays available in most of the applications. So considering the cost of electronic goods, this one would be cheap. In other words, we think that Vox-Dei will revolutionize the concept of home security.