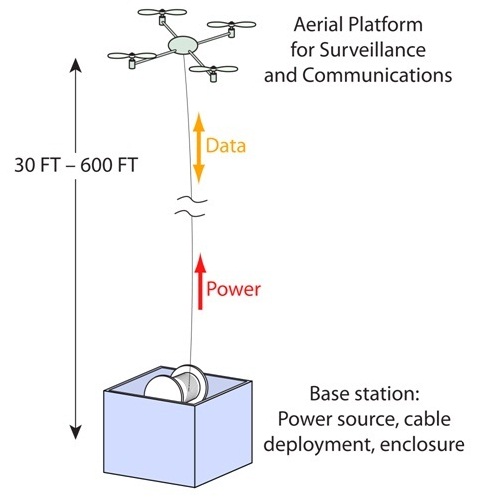 InvisiTower is a persistent, rapidly deployable aerial platform for surveillance and communications. It consists of a small unmanned aerial vehicle that is connected by a tether to a power source on the ground. The platform can remain aloft and stationary indefinitely, carrying a payload of cameras, sensors, or communication repeaters. Thus, it becomes an instantly deployable “tower” to use for communications, intelligence, surveillance, or reconnaissance.

InvisiTower is a transportable, self-deploying, fully recoverable device that can be carried in a vehicle trunk. It can be launched with the push of a button. Power is delivered over a fiber optic cable that is attached from the base station to the aerial platform, which can be positioned hundreds of feet above the base station.

The critical factor behind InvisiTower is laser power beaming, which involves the wireless delivery of electrical power over long distances via laser beam. Laser power beaming has been a scientific dream for decades that became a reality when LaserMotive won NASA’s 2009 Power Beaming Challenge. In this case, laser light is beamed through the fiber optic cable and converted into electricity at the aerial platform.

Among the uses are for first responders to launch InvisiTower at an emergency event so they have an aerial view of the event; public safety officers can use one to monitor large crowd events from hundreds of feet overhead; military forces operating in urban canyons such as Baghdad can launch InvisiTower as a communication repeater platform to enhance the range of their radios, and it can aid in search and rescue efforts.

The system is scalable, so higher altitudes (e.g. 1,500+ feet) or larger payloads can be achieved with larger single or multi-rotor platforms or powered aerostats.