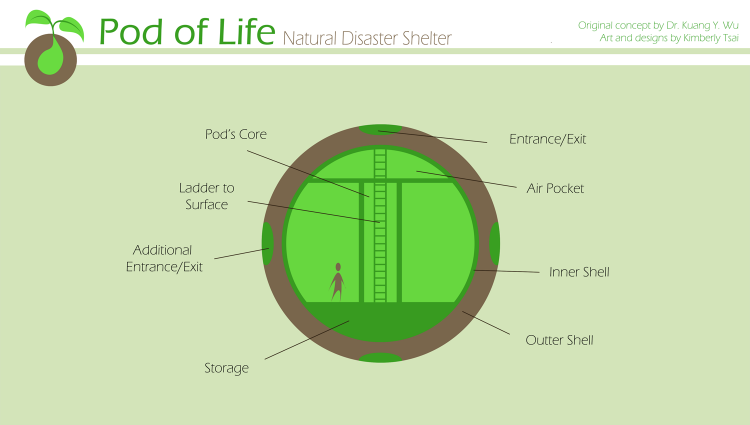 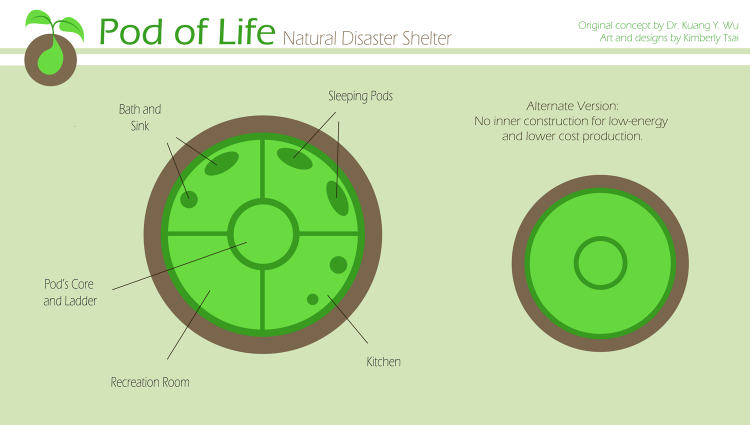 After the wake of the tsunami and hurricane natural disasters, my uncle Kuang Wu presented to me an idea to help save lives in such situations. His idea was using a perfect sphere to protect people from danger and help save lives. After several designs and concepts, I thought of using seeds as an additional inspiration for the design. Seeds have a hard shell and have been known to survive all kinds of environments, and can still germinate and therefore survive even after thousands of years of dormancy. This idea carried over into the Pod of Life’s concept and name.

The design of the Pod of Life centers around the idea of a reverse gyroscope - instead of the inside rotating, the outside is free to move around the center, should the sphere be in motion. Sensors on the outside and inside of the Pod will be able to detect if the Pod has come to a complete stop. The Pod will have more than one exit on the outer shell, and should the exit become misaligned, the inner Pod will rotate to the closest and up-most exit.

The floor of the sphere is used as a storage space for food and supplies. The sphere itself will have a mechanism that can tell if it is parallel with the ground (in accordance to the gravitational pull). All/Any items of note are bolted down in case this mechanism fails.

Solar panels on the outside of the Pod will help generate energy and therefore serve as a power source to help its occupants. If no solar energy is available, the Pod can run its own fuel cells for a limited time. This energy will power a steady signal so that rescuers may find the Pod of Life. All Pods will have a GPS device attached to them, so that rescuers will know where exactly to find the survivors.

Should the outer shell be pierced, the Pod’s core can be used to protect occupants. The Core’s efficiency isn’t as great as the whole pod in function, however it can buy the occupants time and give a higher chance of survival in dire situations.

This type of shelter would be useful for many types of disasters, including water, wind, and earth related disasters. Because of its air pocket, the pod will be able to float if it is submerged. Occupants will still have air and a space to live in should the Pod be buried. With the reverse gyroscope mechanism, even if the Pod is traveling at a high speed, the core will be stable enough to feel little turbulence. There have been many victims whom died from waiting for rescue; with the Pod’s GPS this will reduce the risk of never being found. For these reasons, the Pod of Life can help victims of disasters survive disasters and become reunited with loved ones.