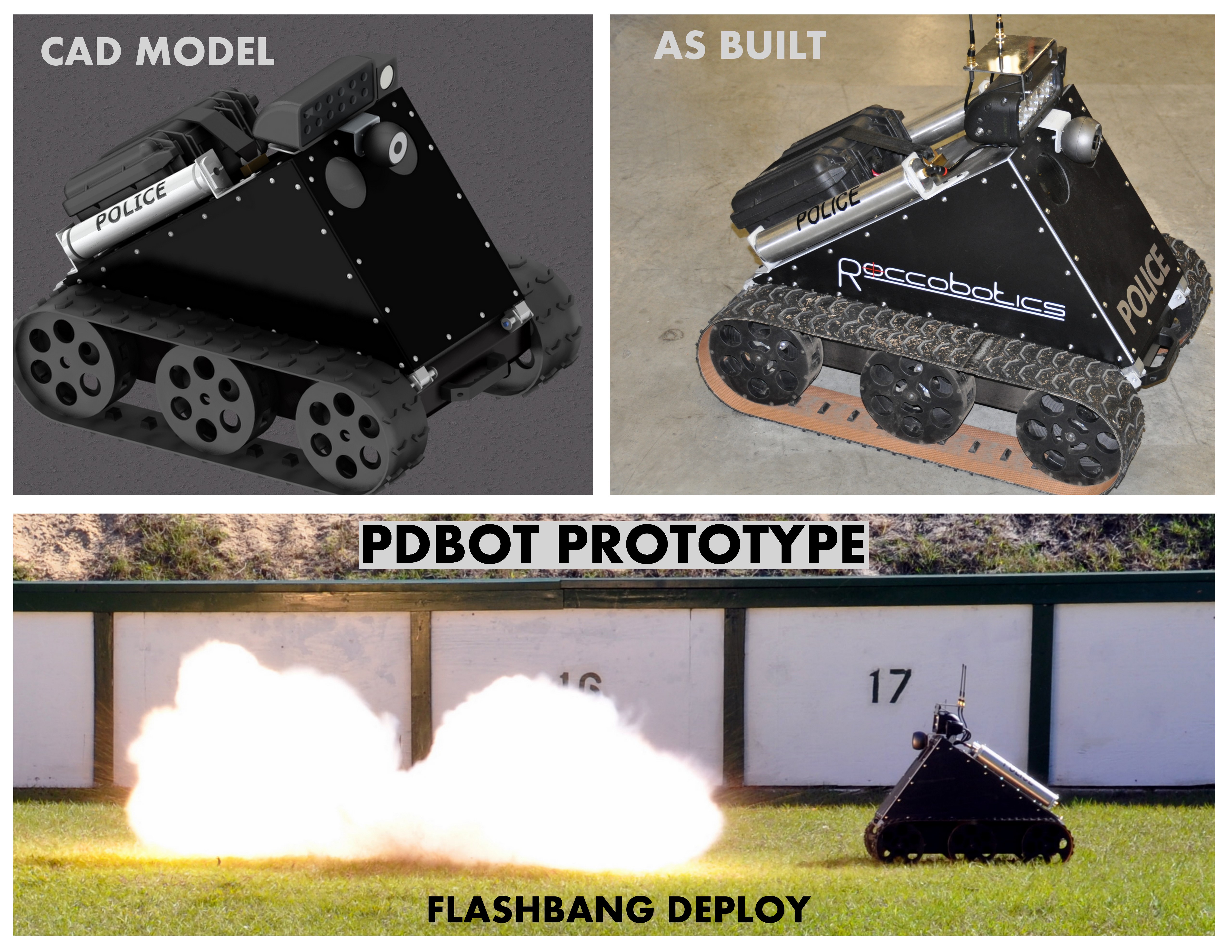 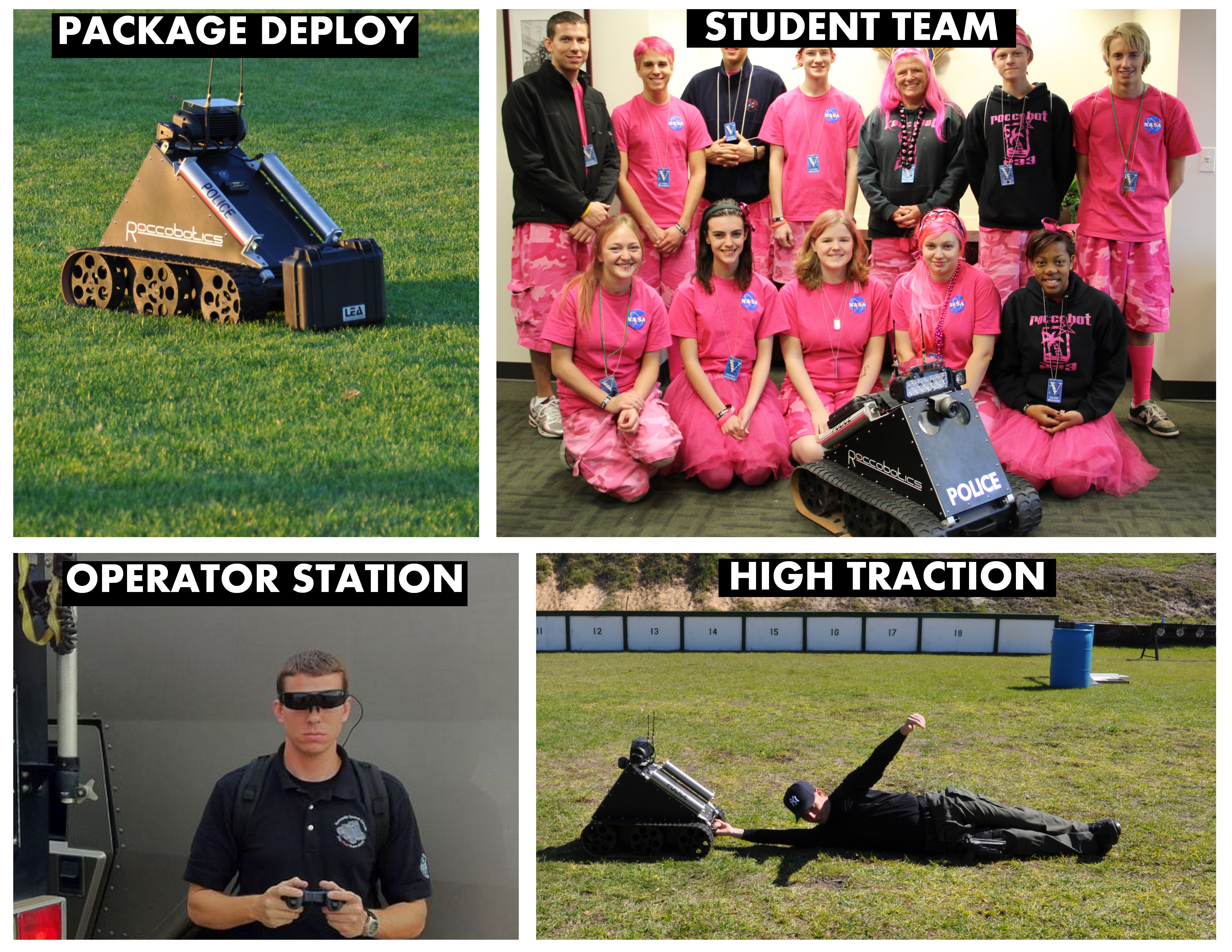 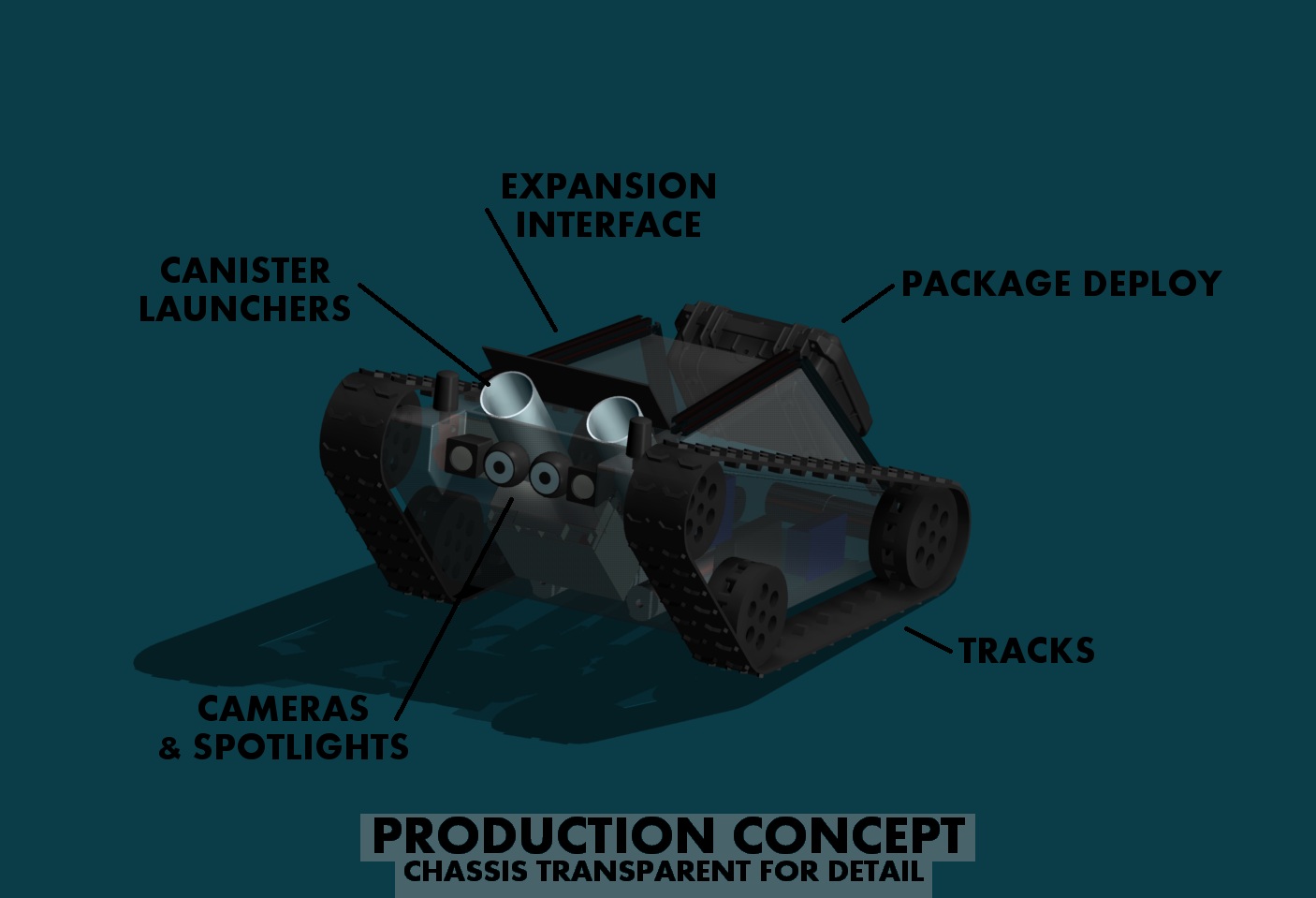 Police support robots are critical life saving tools for officers in the field. Unfortunately, the high cost of such devices prevents many security forces from obtaining them. In addition, police officers typically don’t have the expertise to repair broken robots, and the turn-around time for repairs at the manufacturer can take months. We are developing a low cost but highly capable security robot that not only includes a local support system, but also encourages high school students to participate in Science, Technology, Engineering, and Mathematics (STEM) while helping their local community.

Like more expensive robots, the Police Department robot (PD Bot) is a remote controlled machine that can cross rough terrain, climb inclines of 50 degrees, deploy police “throw phones” or other payloads, can communicate with two-way duplex audio, and can operate at ranges of over 500 feet. Unlike other available robots however, PD Bot can deploy non-lethal canister munitions such as smoke or flash bangs, and can transmit and record stereoscopic video in day or night. The operator wears a backpack containing lightweight, battery powered control equipment including a hand-held controller and 3D video glasses for complete mobility. Even with all of this capability, PD Bot will be available for less than half the cost of other comparable robots to the over 30,000 security organizations in the US alone.

To realize the cost savings, PD Bot is being developed as a kit by the Rockledge and Cocoa Beach high school robotics team of the FIRST (For Inspiration and Recognition of Science and Technology) robotics competition. The kits will include all of the components required to build a PD Bot and detailed video instructions on how to assemble and test. Kits will be made available to the other 2000+ robotics teams who will build the robot, provide the finished machine to their local police forces as a fund raiser, and then lend their expertise to sustain it.

Our team has completed a prototype of PD Bot that has since been donated to our local police department and received tremendous feedback. The production model of PD Bot is currently being designed and incorporates lessons learned from the prototype. The new design consists of a four piece sheet metal chassis to be assembled with rivets and then welded to reduce fabrication setup time and cost. The chassis supports six molded polyurethane wheels that mesh with rugged tracks on either side. Two canister launchers are hidden under a sealed door at the front of the robot. A ratcheting belt on the back slope of the chassis holds a variety of different sized packages for delivery. T-slot extruded aluminum rails on the top provide an interface for future expansion; such as an arm or other implement.

PD Bot is a unique approach to a mobile police robot that leverages the expertise of robotics teams around the country to put a low-cost and high-quality tool in the hands of officers, support STEM education, and save lives.