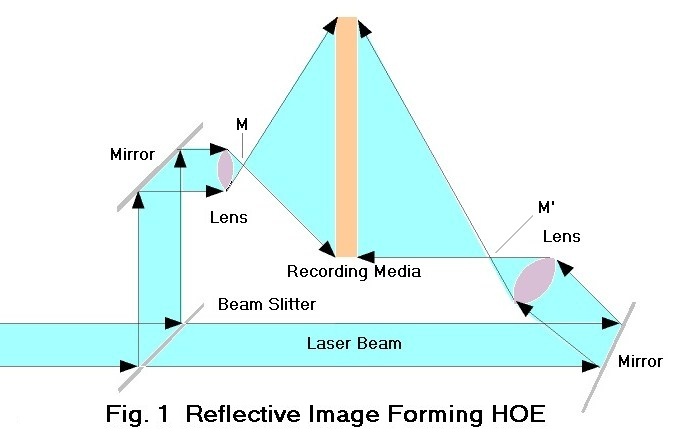 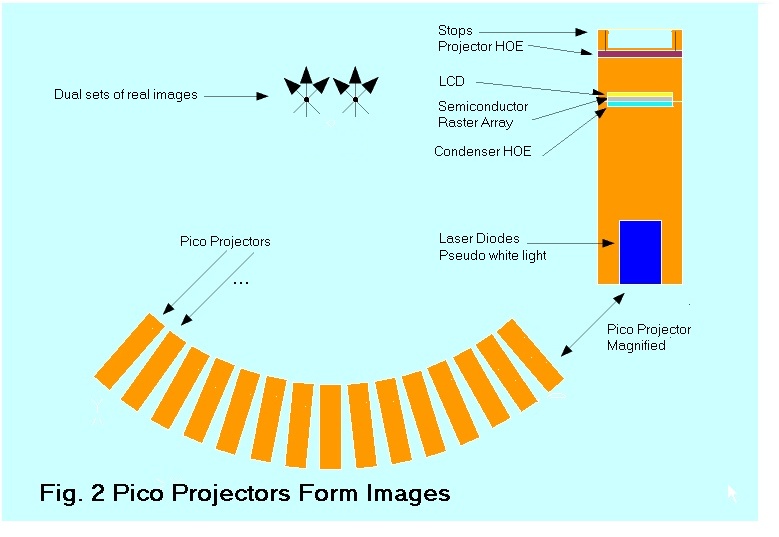 This invention will present 3D displays without the need for special glasses. It will permit an observer to move about and see different views.

The construction of a HOE is shown in Fig. 1. If an object or image is placed in points M or M’, the object’s image will appear at the other conjugate point of the processed HOE. Since Fig. 1 is a reflection hologram, it will create a virtual image. This invention uses both reflective and transmission HOEs. HOEs can be constructed with multiple conjugate pairs.

Integral photography is method of capturing 3D images by using an array of 2D cameras. Such a row of cameras could be mounted on a boom and moved about to capture scenes. This invention uses a row of TV cameras or a row of computer generated integral images.

Fig. 3 shows that the two sets of real images produced by the projectors become greatly magnified virtual images observed in a large reflective HOE. This virtual image is a plurality of flat images each radiating at a slightly different angle. An observer will see a stereoscopic image or observe parallax by moving horizontally to the display. Dual focal point on both sides of the HOEs and projector stops insures that viewing angles are without voids and transition between images is gradual.

To use the current invention to display 3D TV, a camera must supply an image to each pico projector. For convenience Fig. 2 shows 15 projectors; 100 cameras would provide a smoother transition between views. If each camera delivers an HDTV image of 20Mb/s bandwidth; 100 cameras would require 2Gb/s. Although this can be achieved by modulating lasers and fiber optic transmission, the highly redundant information offers opportunity for great reduction. Body scanners are an example in which partially redundant information is crunched by RISC processors into 3D information and then displayed and printed as slices.

This invention is currently achievable by state of the art to display computer generated objects as medical images like body scans, CAD, simulation, and visual instruction. Bandwidth, data storage capacity and processor speeds continue to increase exponentially as camera, projector size and cost shrink. This device can grow to fit the future.