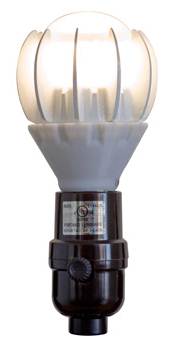 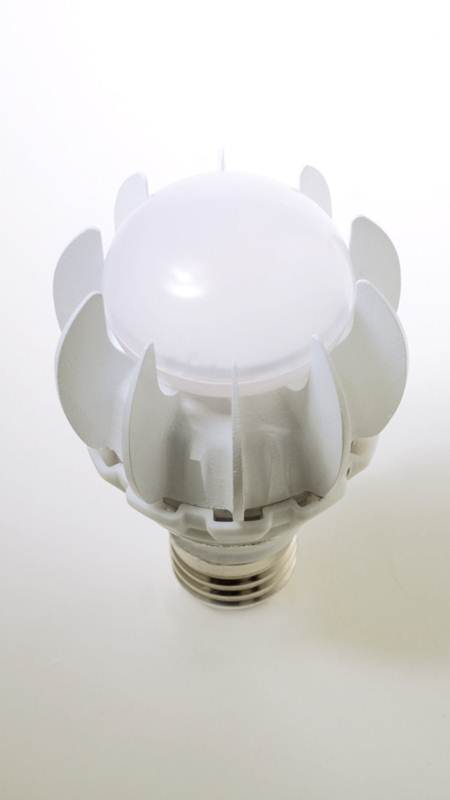 As many people by now realize, the traditional Edison 100W incandescent lamp (known as an "A19") is now no longer in production due to its low energy efficiency. Compact fluorescent "spirals" are generally considered the alternative, but they have some significant negative points, such as being slow to warm-up, having poor light output in cold weather and containing environmentally unfriendly mercury. LED technology can be competitive, delivering long-life (over 25,000 hours), high efficiency and environmental responsibility, if it can generate enough light to be "equivalent" to people's expectations without overheating.

LEDs are semiconductor devices and although they are capable of efficiencies approaching 50%, they don't handle temperature very well. Although a tungsten filament is perfectly suited to glow at 2430°C, LEDs run into reliability problems when they approach 120°C. To get high light-output, heat must be removed quickly and efficiently to prevent excessive temperature, which gets more and more difficult as power increases. This cooling problem has been a major limitation in offering high-output A19 lamps using LED technology.

The GE Lighting Solutions team has solved this thermal problem by implementing a synthetic jet cooling system integrated into an A19 lamp. Active cooling – the concept of incorporating a device that moves air in order to control temperature – is a new concept for the LED industry. This high-technology device generates bursts of air, often described as "jets", which are pointed at the cooling fins to increase their capacity for heat transfer. Why use synthetic jet technology? It has the ability outlive even the LED, where other technologies such as fans are unable to complete, while also staying very quiet. GE partnered with Nuventix to develop and miniaturize the technology along with other innovations that, together, achieve 100W-equivalent performance (1600 lumens) without exceeding the A19 size.