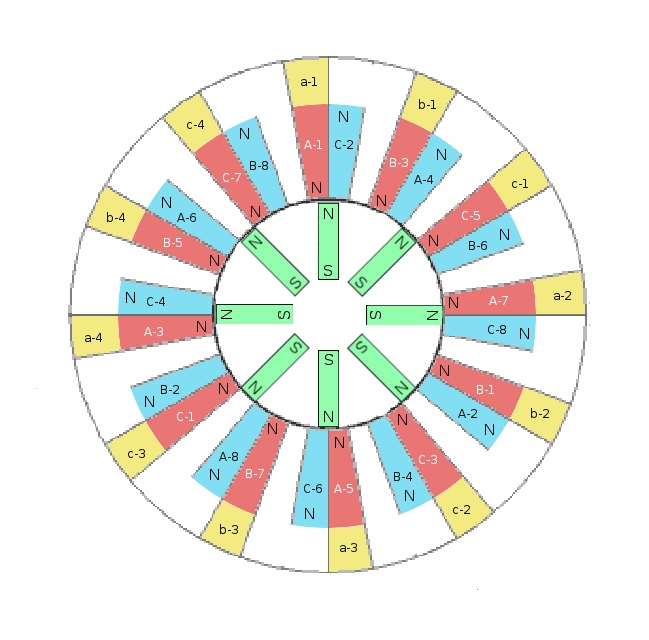 This motor is based on the concept of a resonant energy reaction. An example of a resonant energy reaction is the Tacoma Narrows Bridge collapse of 1940. A constant wind caused the bridge to sway. As it swayed back and forth it absorbed more energy from the wind in one direction than the other. The wind energy kept building in the bridge until it hit structural collapse. This motor is based on the same idea. In place of the wind it uses the elctro-magnetic force. And uses a resonant eletro-magnetic reaction to extract energy from it. The motor consists of a 36 coil stator and a 8 permanent magnet rotor. The stator coils are split into three circuits. Each consisting of 8 reaction coils and four driver coils. The eight reaction coils are wired in series with alternating polarity. They are placed around the stator every 130 degrees and are 10 degrees wide. The four driver coils are placed in line with the reaction coils that have the north pole facing the rotor. To start the motor it must be jump started. As the rotor spins it imparts an AC current in the reaction coils. The current is read by an op-amp circuit (like a four channel car audio amplifier) which drives the driver coils. The driver coils are in place to make up for internal resistance of the motor itself. The rotor alone will not impart a large enough current in the reaction coils to keep the reaction going. If the amount of power added to the system by the driver coils is greater than the internal resistance, the motor will have a greater than 100% efficiency. The extra power is drawn directly from the atomic structure of the motor itself. There is more energy in one square centimeter of space than an electric motor would use in its lifetime. The motor would cost more to produce than a comparable electric motor due to the complexity of the stator design, and even more because of the three amplifiers. But if the motor was linked to an alternator to power itself you could have an automobile that would never need fuel or charging. Or generate power for your home directly from space itself.