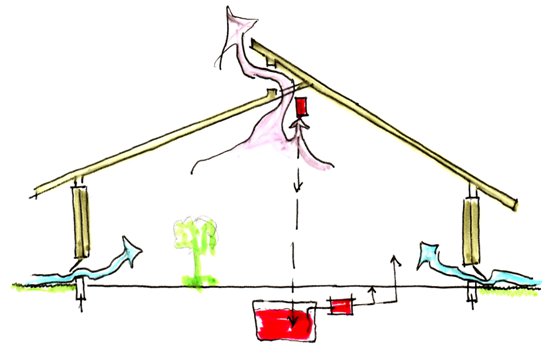 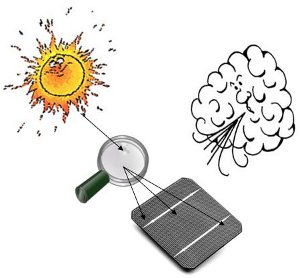 The Cradle-to-Cradle, self-sustaining, zero-net energy city of the future is fast coming to fruition.

A half century ago, learned people were forecasting that by the turn of the century the world would not have enough food or fuel and pollution would dominate the earth. So, what kept us from these predictions ~ Innovation

What began as a request from a client to find a way to use the excess heat that his new addition was creating in winter to the pressure placed by a DOE director to bring e~TECH’s BIPV system to fruition, has resulted in several systems that use Mother Nature rather than the utility company.

To the greatest extent possible, Mother Nature will be used to light, heat and cool ‘NEX~GEN’ facilities as well as provide the man-made waste of which they will be manufactured. Without the use of PV, your future home and workplace will generate, store and return heat and electricity 24/7/365. Note that though it has only an R-2 insulation rating, a study by Oregon’s DOE projected that without photovoltaics, it would consume but 24% of the energy consumed by the same plan built to the Model Energy Code. And, best of all ~ by using man-made waste in componentized assembly systems, it will COST FAR LESS THAN HALF that of current construction. As a HUD director stated, “You are doing to construction what Henry Ford did to the automobile”.

‘enviro~HEAT’... a hybrid-geothermal air-conditioning system that saves the excess heat in the summer and returns it as needed when it would cost over 5 times as much to produce in the winter.

BI~SOLAR (Building-Integrated-Solar)... an architecturally pleasing sandwich of snap-together, polymer panels with the option of all six forms of solar while encompassing most manufacturers’ photovoltaic solar arrays and thermal solar while increasing their output resulting in solar at a lower cost than conventional non-solar roof/walls. It will be available for heavy and light construction as a whole roof/wall systems or a do-it-yourself awning kit for retrofitting. Upon seeing a mock-up of the system, four National Renewable Energy Lab technicians got in a very heated argument as to how much it would increase the output per cell/array. They finally agreed to disagree. Their answers ranged from a low of 4 times, with two in the mid-twenties and the high being 40 times.

Poly-ARCH ... a solar optional system spanning very wide areas column-free with limited visual interference and at a small fraction of current costs ... the economies and advantages of a geodesic dome in a rectangular shape.

And – the latest project

e~GO ... an inexpensive method to generate – store – and return electricity 24/7/365 WITHOUT the use of photovoltaics

Visit www.enlighten.us to see how e~TECH is creating your future.