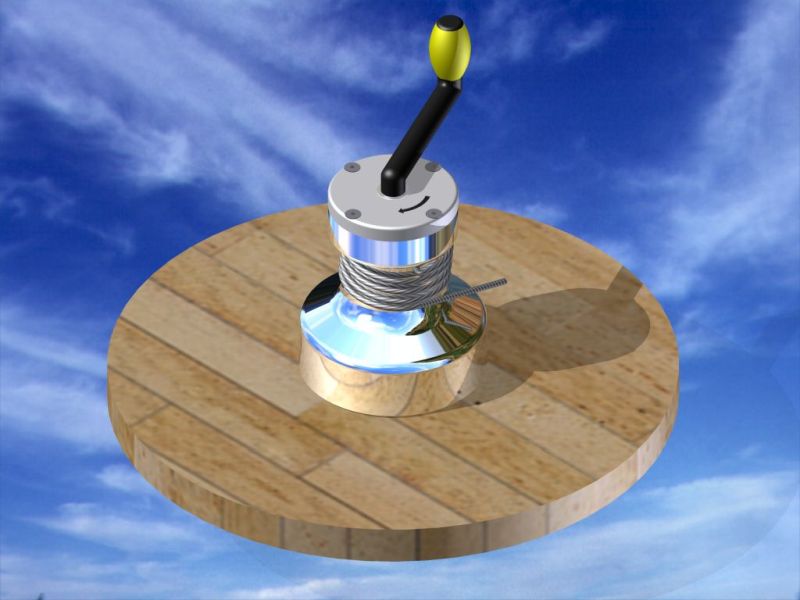 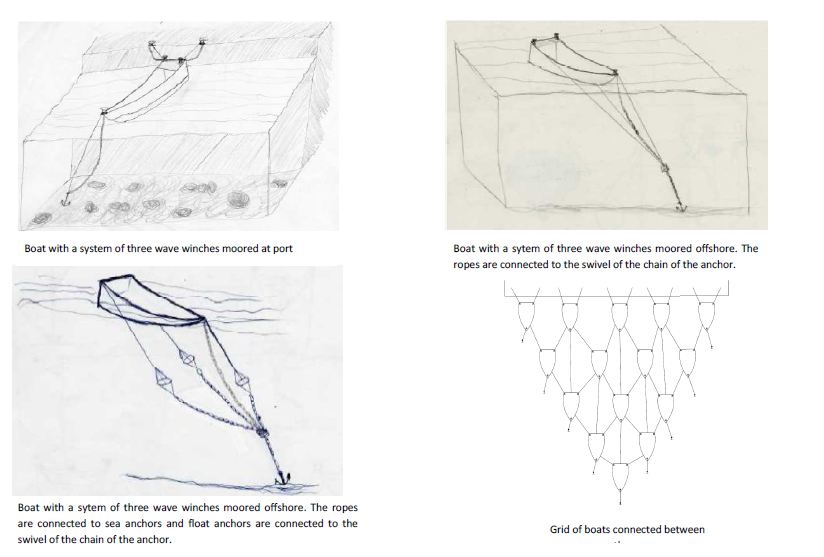 Wave Winch is a wave energy absorber, based on the structure of the nautical winch, specially designed to damp the oscillations of a boat while it is moored and to transform the mechanical energy of the boat to electricity able to be stored in batteries. Thus the system provides both clean renewable energy and greater comfort to the passengers.

Wave winch consists of a drum linked to the base of the mechanism through a revolute joint, a spring rewinder and a ratchet. The drum is connected through gears to a separate gear box which rotates the electric DC generator. The electric circuit consists of an electric diode connected in series to a charge regulator for batteries or alternatively to an inverter. The structural similarities between the wave winches and the conventional nautical winches lead to easy and cheap production from the industries and high functionality and robustness.

It is possible to establish one or more wave winches on a single boat. Three of them are enough to absorb the energy from the movement of the boat in all its degrees of freedom. It can be used either when the ship is moored at port or offshore. It is also possible to connect boats between them in order to create a grid on the sea surface.

For safety reasons the wave winch system should be used only when the boat is safely moored according to the conventional ways. Other way the system may not withstand the wave excitation forces.

The user should find a suitable place outside the boat and connect it to the free end of the rope which is spooled to the drum of the wave winch. Then the user rotates the handle of the wave winch until the rope is tensioned well enough so as not to slack during the function of the system. The handle is then removed and the wave winch is ready for use. The same procedure should be followed for every wave winch.

Wave winches can be used either in conventional or in hybrid / electric boats in order to produce electricity or reduce fuel consumption correspondingly. The cost of a wave winch is expected to be similar to the cost of a conventional nautical electric winch, which varies between 2000€ and 4000€ depending on the size and the nominal power. The financial outcome of the investment depends on the scenario of use. Greater profit is achieved when the system is used on hybrid or electric crafts due to the reduction in fuel consumption. In both cases should be added the non monetary value of the comfort achieved due to the damping of boat oscillations.

Wave winches absorb wave energy using floaters whose main purpose is different than energy production, such as ships and boats. Combined use can make it possible to extract clean, renewable energy from ocean waves in an inexpensive way and promote wave energy harvesting to a wide range of people.