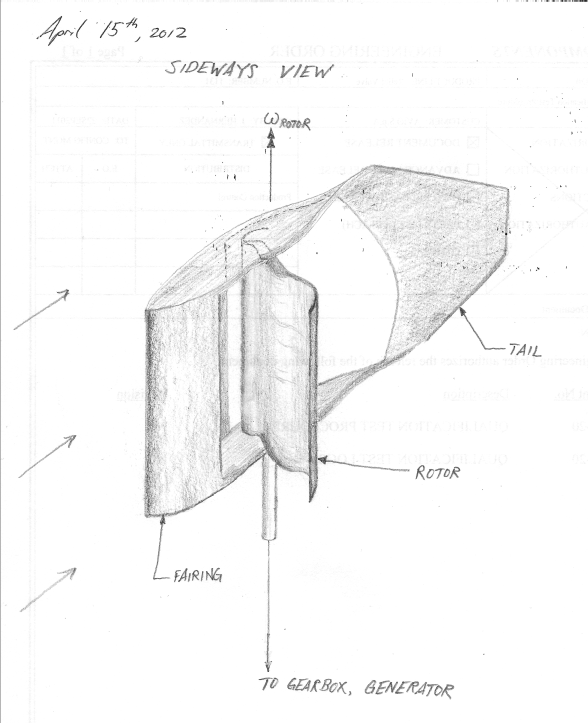 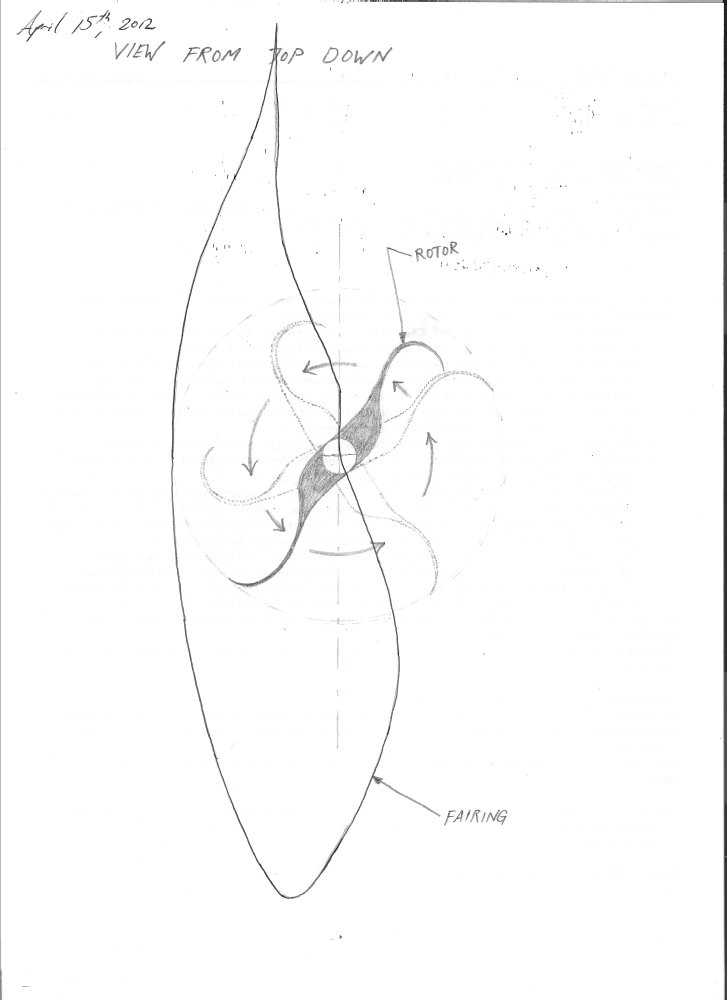 Currently much motivation exists for development of wind turbines in the lower wind speed regimes.

Many wind turbines face difficulties during high wind speed (e.g., during a storm) and must either apply overspeed protection, in the form of a reverse torque, or shut off altogether in a feathered mode to avoid damage. Extraction of energy in the high wind speed regime is generally more difficult for that of low wind speed, partially because of the engineering challenges involved to handle capability with high wind speed. The problem is also compounded by the increasingly sporadic, punctuated frequency of event occurrence as a function of wind speed.

On the other hand, extraction of the low wind speed regime, despite energy limits, provides a more consistent energy input with much broader geographic applicability.

A vertical axis wind turbine (VAWT) is described herein to meet the needs of low wind speed powere generation. This VAWT is not a Darrieus-type, but rather a modified form of a Savonius-type rotor. Traditional S-shaped Savonius rotors have been suggested as wind turbines because they are capable of producing power at very low wind speeds, but face difficulties with power efficiency and structural integrity during storms [1].

This design of a modified dual-blade Savonius rotor has two design advantages: a blade which varies in curvature through the 360-degree sweep, and a fairing to shield the returning blades from pressure drag.

The fairing, which rotates by means of a large tail, covers only the return arc of the rotation to reduce the drag on the blade. The fairing also serves to protect the whole turbine structure against excessive drag during high wind events. If locked down, the returning blade is positioned 30 degrees away from the wind, as shown.

The modified blade itself is a variable-cambered fiberglass plate. Fiberglass is chosen due to its capability to flex and, when fabricated to high fiber volume fractions, adequate fatigue tolerance. The precambering is performed by means of a high-strength tendons which bend the rotor blade starting at 120 degrees, with 0 degrees denoting a blade pointing against the wind direction. This accomplishes several objectives:

1. The returning blade faces a lower drag. The tip bends inwards to reduce the outer radius approximately 20 percent. This reduces the estimated drag by approximately 50 percent.

2. Provided the outgoing and returning blades extend and contract at the same time, the oscillation on the rotational speed is minimized.

3. The lift force component on the outgoing blade is enhanced, because the peak lift force coincides with a contracted opposite rotor, providing a tip speed ratio higher than the traditional Savonius rotor designs. At the same time, the pressure drag component, which is required for low wind speed power generation, is not compromised. Thus, the efficiency is likewise improved.