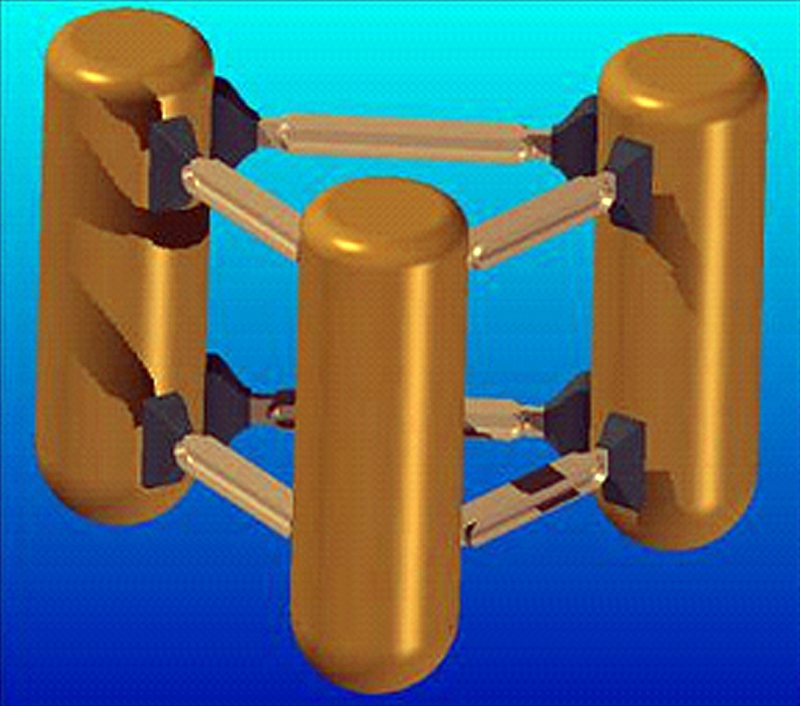 Solar power can only be harvested during daylight and then when not degraded by fog or overcast conditions. Wave energy is the only continuously available environmental power source (except for calm seas) that might be harvested. On the open sea the potential energy of wave swell is principal energy source. This energy might be captured hydraulically and converted with hydraulic motor - electric generator units, or captured through an efficient energy scavenging and storage means that utilizes mature technologies and CoT components.

While there is growing recognition of the immense benefits of renewable versus combustion derived energy – little attention is given to the visual blight of solar panels and wind turbines, the noise of turbines, and the lethal impact on birds etc. of turbines and solar furnaces. Unlike these, the wave energy scavenger is essentially submerged hence presents little visual impact, it is silent in operation, and harmless to marine life.

The idea of using waves for electricity generation is not new. Several companies have developed anchored swell energy scavenging machines and hydro-generation from high tide damming projects. But until now, no organization has filled the real gap in establishing a continuously available source of energy that requires no infrastructure, is portable, affordable, reliable, environmentally benign, and has a zero carbon print. This wave energy scavenger mechanism is more efficient and less expensive/intensive than other approaches to date - the future of electricity generation by the use of wave energy will vanguard a new dimension to the renewable energy market.

The potential energy capture concept is presented in the drawing - the energy scavenging ‘buoy.’ As the various cylindrical floats differentially rise and fall on the swell, the leverage arm tie bars rotate. The frequency of rotation of leverage arms is set by the periodicity of the wave. The angle a leverage arm is rotated through is related to wave height, fraction of wave pitch separating coupled floats, and the orientations of coupled floats.

The size of floats, length of leverage arms, rotation excursions for leverage arms et cetera need optimizing for a particular machine on the basis of wave conditions at site of deployment. The power densities of these machines in moderate seas, typically hundreds of Kilowatts of continuous energy, and particularly larger renditions of them, are sufficient for off-shore generation and feed into regional power grids. A particularly compelling deployment that doesn’t require regional power grids is in ports to provide auxiliary power to berthed ships and to loading/unloading machinery.

The immediate first adopters of the environmentally friendly, continuously available power generating system would be existing costal power stations with installations just off shore where generated energy could be directly connected to existing power grid. Small coastal towns could be next market where they elect to be their own power generating authority. The potential market is large - the bottleneck for installations is considered to be the rate at which these scavengers can be produced.